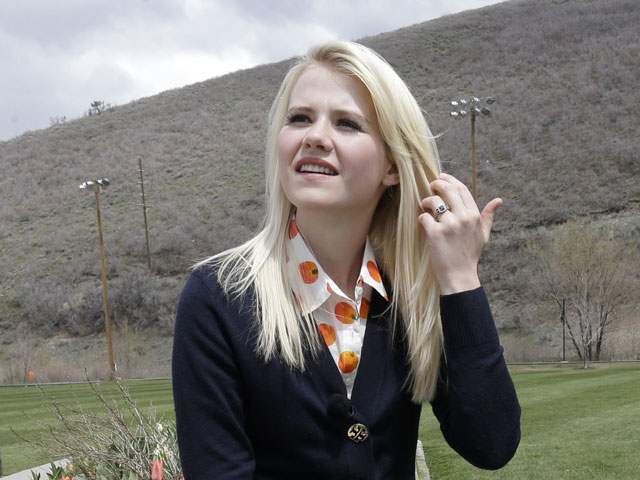 (CBS/AP) - Ten years after then-14-year-old Elizabeth Smart was snatched from her suburban Salt Lake City bedroom at knife point, she has published a memoir recounting the "nine months of hell" she spent as a sex object and slave to Brian David Mitchell and his wife, Wanda Barzee.

PICTURES: Elizabeth Smart and her captors

In "My Story," released Monday, Oct. 7 by St. Martin's Press, Smart, now, married, finishing a music degree at Brigham Young University, and working as a child advocate, tells of multiple near-miss rescue possibilities, and writes that she was so terrified of the street preacher who kidnapped her that when she was rescued by police in a Salt Lake City suburb in March 2003, she only reluctantly identified herself.

Smart says she doesn't care to understand Mitchell, yet her book opens a window on his personality. He was a downtown Salt Lake City fixture in a robe and sandals who first laid eyes on Smart when her mother offered him $5 and work at the family home.

At that moment, he resolved to take her as the second of a hoped-for five wives, he later told Smart.

Smart says Mitchell believed that anything in the world was his for the taking, and that he was a man who never cared for anyone even as he ranted about God. Smart calls him a "manipulative, antisocial and narcissistic pedophile."

The book, written with help from Utah congressman Chris Stewart, describes the time a homicide detective questioned Mitchell at a downtown Salt Lake City library. From under a table, Barzee clamped "iron" fingers into Smart's thigh. Smart, disguised in a dirty robe and face veil, remained silent as she remembered the couple's repeated threats to kill her family if she tried to save herself.

And only days into the kidnapping, a helicopter hovered over the makeshift camp in the mountains just 5 miles from Smart's home where she was kept tethered to trees by steel cables.

She was forced inside a tent as the wash of the helicopter's rotors bent trees around them. After an eternal minute, she watched the helicopter slowly glide away.

It never returned. Mitchell took it as another favorable sign from God.

"Why didn't I cry out for help?" Smart reflects. The answer "comes down to fear."

After Smart's rescue, Mitchell wheedled his way through state courts for more than six years, leaving them hopelessly bogged down in hearings over his mental competence. Federal prosecutors took over, and a judge ruled Mitchell was faking mental illness.

Mitchell is serving two life terms after he was sentenced in 2011. A year earlier, Barzee was given 15 years for her role in Smart's kidnapping and sexual assault.

Mitchell managed to convince some psychiatrists he was insane.He shouted hymns and songs in court and ordered judges to "repent." Smart described a moment in his federal trial when Mitchell feigned collapse, with paramedics rushing into court.

Between gasps and moans on a gurney, Mitchell locked eyes with Smart for the first time in years. He offered an "evil grin" to show he could still control others, she writes. "I returned his cold stare, never looking away."

It was outside San Diego, where Mitchell took Barzee and Smart for winter at a homeless camp, that Smart devised a plan for freedom. She convinced Mitchell that God intended them to return to Salt Lake City.

On their arrival outside the city, police stopped the odd-looking trio, a middle-aged couple and young girl wearing filthy clothes, a gray wig and dark sunglasses, walking along a major metro street. Smart writes that before she identified herself, police seemed to know they had found her, asking, "Are you Elizabeth Smart?"