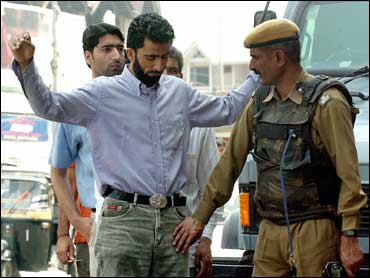 The Miami relatives of Elian Gonzalez have released a videotape of the 6-year-old saying he does not want to return to Cuba.

The boy, speaking in Spanish, adresses his father.

The tape was quickly rebroadcast on cable news networks, and prompted a protest by the lawyer for Elian's father, Juan Miguel Gonzalez. Gregory Craig called on the news media to stay away from the boy because he "has been exploited enough."

Craig says, "Mr. Gonzalez and only Mr. Gonzalez has the legal and moral right to speak for Elian Gonzalez." He adds, "The news media should know that Mr. Gonzalez has not given his permission or approval for any journalist to interview, photograph, film or broadcast his son.''

The home video was released to a Spanish language station, but experts believe you don't have to wait for translation to interpret what has happened to this little boy who, from the moment he was rescued, became part of a very adult agenda, reports CBS News Correspondent Richard Schlesinger.

Dr. Harold Koplewicz, a leading child psychiatrist, tells CBS News, "I have trouble giving any validity to what he says because I think he very much wants to please his uncle and his cousins and that's why he's saying it."

The video tape is just the latest episode in the ongoing Elian drama. Every where he goes, he's photographed and the house he's staying in is in the international spotlight.

Koplewicz says with all the attention on Elian, "Quite clearly this boy is in charge in ways he shouldn't be."

The tape is one more way, says Koplewicz, that a six-year-old boy is being asked to make life-altering decisions—decisions children are not usually allowed to make.

Koplewicz says, "We recognize that 6-year-olds don't have the judgement to be able to make those decisions and that they're easily swayed by emotional and physical things."

Koplewicz believes Elian Gonzalez is now what he calls a high risk kid, and that once this is over the boy may suffer from a kind of Post-Traumatic Stress Disorder. That's when he'll really need psychological help, wherever he ends up.

CBS News Correspondent Randall Pinkston reports that in Havana, Elian's video tape was being picked apart by members of a team selected by the Cuban government to help the child adjust once he returns home.

Psychologist Patricia Ares Murzio says, " What the child is saying is induced, someone told him to say those things.... There is no spontaneity to his words, he looks up for approval."

Muzio and Aurora Garcia Morey are worried about long term effects to Elian if force is used to remove him from his great uncle's house.

Ares Muzio says, "The reaction of the child will be a reaction of fear. He will be apprehensive, scared, not trusting in the beginning."

Garcia says that when Elian comes homto Cuba, "Before anything, he should be with his family, he should become familiar again with his environment."

If he does return, his grandparents and other immediate family members will help with the transition first at an undisclosed location—perhaps a government compound like
this one. Then, after psychological evaluation and counseling, Elian returns home to Cosio Street in Cardenas.

CBS News has learned from sources close to Juan Miguel Gonzalez that the Cuban government offered him a job in Havana. But he reportedly turned it down because he wants to remain in Cardenas near his family and the job he has now—a security guard at a tourist resort.