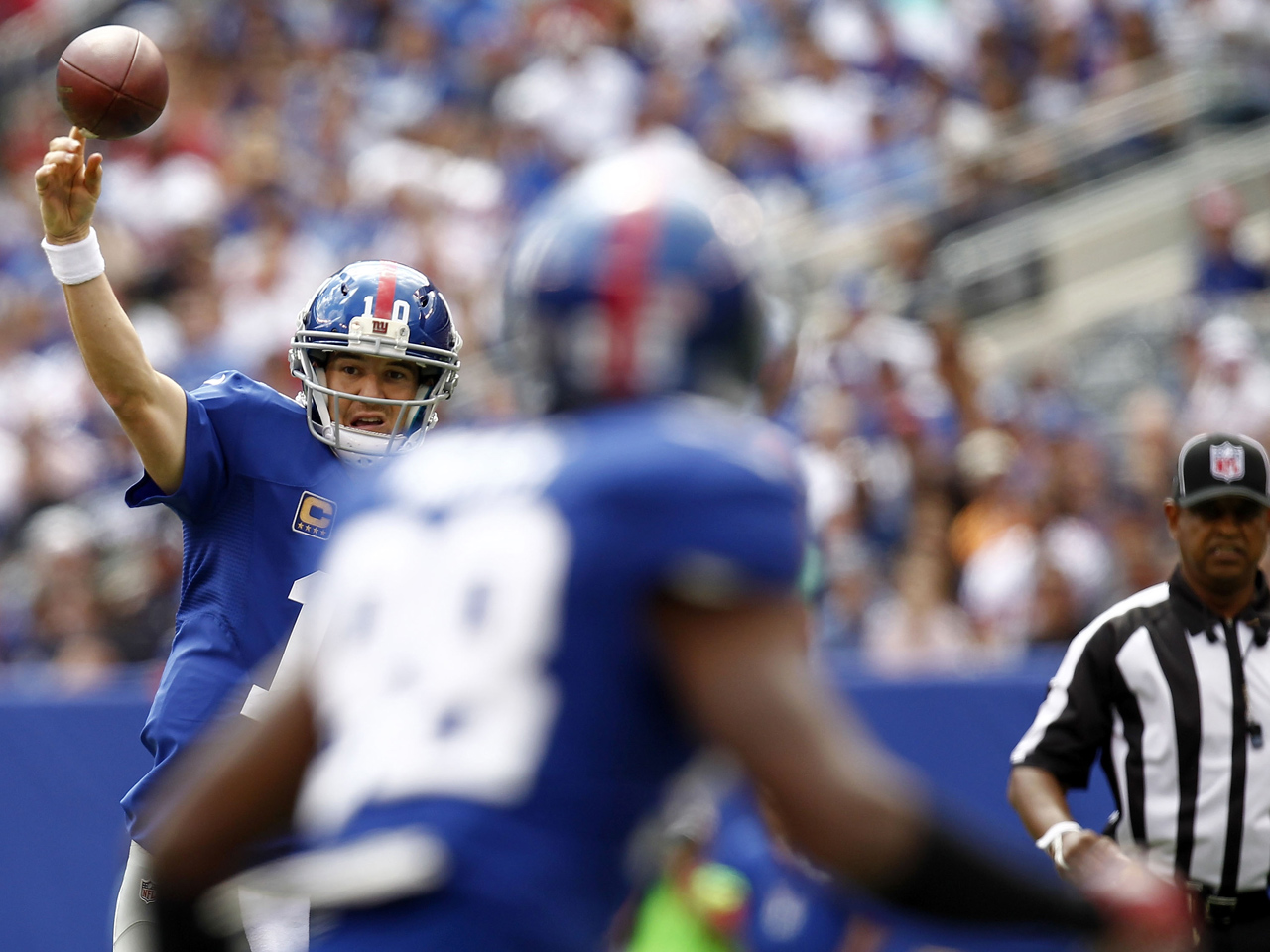 (AP) EAST RUTHERFORD, N.J. - Eli Manning needed a near-record performance to make up for his own mistakes.

Manning threw for 510 yards, second most for a Giants quarterback, and Andre Brown's 2-yard run with 31 seconds left lifted New York to a wild 41-34 victory Sunday over the Tampa Bay Buccaneers.

Manning overcame a miserable first half with a monster 295 yards passing in the second half, tying for the eighth most in NFL history and 3 yards short of Phil Simms' Giants record. After his three first-half interceptions staked the Bucs (1-1) to an 11-point lead, Manning helped the Super Bowl champions avoid a dreaded 0-2 start.

He threw touchdowns of 23 yards to Hakeem Nicks, 80 to Victor Cruz and 33 to Martellus Bennett with 3:59 to play to give New York a 34-27 lead. Andre Brown scored on a 2-point conversion run to tie the game after the Cruz score that ended with his trademark salsa.

Josh Freeman tied the game with a 41-yard pass to Mike Williams, but Manning drove New York 80 yards in four plays to win it. A 50-yard completing to Nicks led to Brown's score, which came one play after he knelt at the 2 when Tampa Bay was letting him score.

There was an incident between Giants coach Tom Coughlin and former Rutgers and current Bucs coach Greg Schiano at the end of the game. Coughlin yelled at Schiano about a scrum when Manning took a knee after Michael Boley intercepted Freeman's pass in the closing seconds.

Manning was not hurt, but there was shoving and maybe even punches in the scrum. Coughlin contended that someone might have been injured on a play in which teams typically go through the motions.

Manning finished 31 of 51 in helping the Giants gain 604 yards in total offense. Cruz, who attended his grandmother's funeral on Friday, and Hicks, who has battled foot injuries all season and had a foot stomped on in the Giants' 25-point fourth quarter, both had career games.

Cruz finished with 11 catches for 179 yards, both career highs, while Nicks had 10 catches for 199 yards, with the yardage a personal best.

Lawrence Tynes kicked four field goals for the Giants, who played a lot better after a dismal effort in the season-opening 24-17 loss to Dallas 10 days ago. But they were trailing for most of the game.

Freeman finished 15 of 28 for 243 yards and two touchdowns. The first score covered 29 yards to Vincent Jackson, who had five catches for 128 yards. Doug Martin (20 for 66) ran 8 yards for a TD and Eric Wright returned the last of Manning's interceptions 60 yards for a touchdown just :08 before halftime.

Trailing 27-13 early in the second half, the Giants scored 14 straight points. Manning caught safety Ronde Barber cheating for a pass underneath and Cruz ran right past him for his long score. Brown, who carried 13 times for 71 yards filling in for injured Ahmad Bradshaw (neck), tied the game with the 2-point run.

After a three-and-out by the Bucs, Manning drove the Giants 67 yards in four plays, hitting Bennett in stride for a go-ahead touchdown down the right sideline.

The lead didn't last long. Tampa Bay drove 80 yards in five plays, with Freeman hitting Williams with a 41-yard strike in the end zone. Williams seemed to catch it off the helmet of cornerback Justin Tryon.

The Buccaneers turned Manning's three first-half interceptions into 21 points, with the most crushing pick being Wright's 60-yard return for a 24-13 lead. Manning was moving New York into position for a field goal when Wright simply reached up and snatched Manning's short pass to Cruz. He then weaved his way through a logjam and down the sideline.

Linebacker Mason Foster got the first interception at the Giants 28 early in the second quarter when Manning didn't put enough air under a touch pass to Bennett.

Three plays later, Freeman showed poise under pressure and lofted an arcing pass that Jackson caught in stride for a touchdown.

Backup cornerback Brandon McDonald got the second interception as the replacement officials missed a holding call on Barber against Cruz. McDonald returned it 40 yards and a personal foul moved the ball to the 13. Martin scored two plays later.

Manning's 23-yard touchdown pass to Nicks closed the gap to 17-13, but Wright ended the half with his big play.

The country's three biggest states — California, Florida and Texas — are all reporting their largest one-day death tolls since the COVID-19 pandemic began. 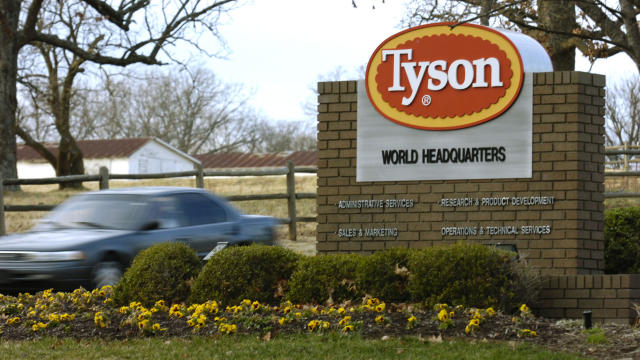 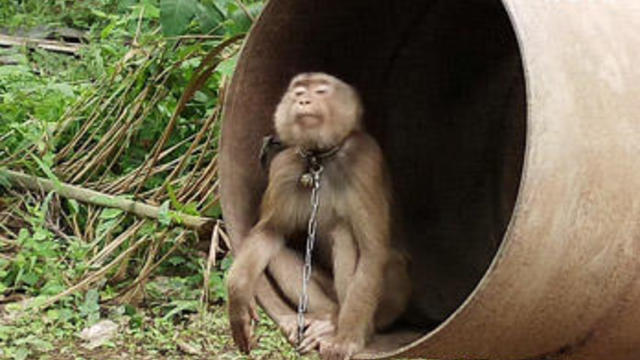 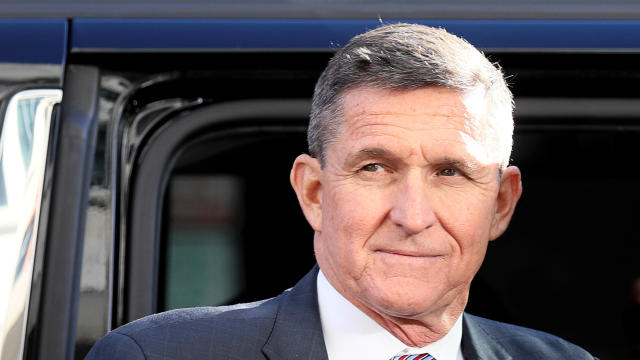