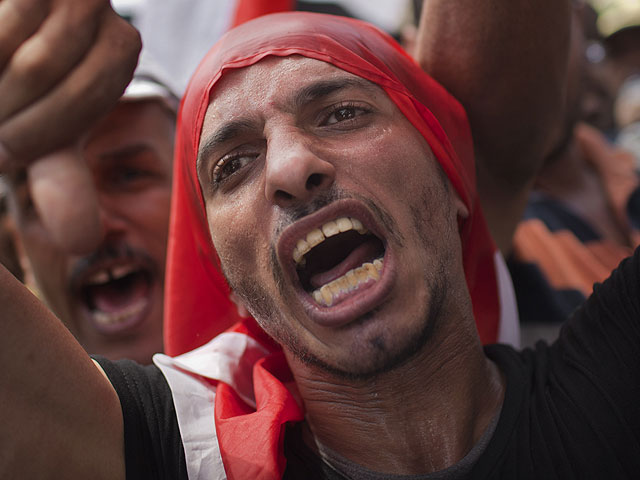 (CBS News) CAIRO - The Egyptian military has issued a warning to tens of thousands of demonstrators gathering at Tahrir Square: any sign of violence will be met with a firm response.

In a statement read on Egyptian TV, the ruling military blamed both presidential candidates for causing trouble by, in essence, claiming victory before the official election results are announced.

Without naming the Muslim Brotherhood's Mohammed Morsi and former general Ahmed Shafiq, the council said premature victory announcements were "unjustifiable" and one of the main causes of division and confusion in the country.

Both candidates say they're confident of winning. Morsi said so on Sunday not long after the polls closed, and Shafiq, who served as the last prime minister of former leader Hosni Mubarak, expressed the same sentiment in a speech just last night.

The military council also warned that it will defend against public disorder, a message aimed at tens of thousands of the mainly Muslim Brotherhood supporters gathering at Tahrir Square.

The military said demonstrators were free to protest, but any efforts to cause public harm would not be tolerated - basically a veiled warning of "we'll allow so much, but don't push it."

The number of demonstrators has increased dramatically following Friday prayers that were held in the square.

By Friday night, once the 100-degree plus heat cools off, huge numbers are expected, possibly on a scale not seen since the overthrow of President Hosni Mubarak last year.

Protestors are also demonstrating against what some see as a blatant power grab by the ruling military.

The council defended a constitutional declaration announced earlier this week that severely limits the powers of the incoming president.

The new decree gives the military sweeping powers, including a hold over foreign policy, creation of new legislation, and the right to select a panel to draft a new constitution - essentially a green light to write the new rule book.

The results of the election were due to be announced Thursday. But since Tuesday supporters of the Muslim Brotherhood have come by the tens of thousands, despite soaring temperatures.

The election results may be made public by Sunday, and supporters of the Muslim Brotherhood have already warned that a win by the Shafiq, still seen by some as a symbol of the old guard, could only have been rigged, and it's not something they're going to accept.

Once again, Egypt faces a moment of truth, and everybody here is bracing for what's to come this weekend.