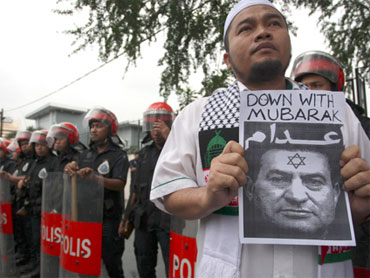 CAIRO - Moody's Investors Service cut Egypt's government bond rating and revised its outlook to negative following a week of protests that have catapulted the Arab world's most populous nation into a state of chaos.

The downward revision is at least the second by an international ratings agency since the mass demonstrations demanding President Hosni Mubarak's ouster began a week ago. Fitch had also lowered its outlook for the country to negative, citing worries about the unrest and questions about what it means for Egypt.

Moody's said that its cut was driven by the growing unrest, noting that "Egypt suffers from deep-seated political and socio-economic challenges."

Unemployment is unofficially estimated at over 25 percent, even higher among the youth, food price inflation has been at about 17 percent per year and the rampant poverty and inequity in income distribution have all served as a catalyst for the popular uprising.

The ratings agency's cut of the government bond from Ba1 to Ba2 appears more symbolic than substantive. Both categories were speculative - far from investment grade. But Moody's also cut the country ceiling for foreign currency bonds to Baa3 from Baa2, the lowest investment grade level.

Such steps are likely to further raise the costs of borrowing for Egypt, which have already climbed since the unrest began.

Egypt, which had enjoyed relatively robust economic growth rates, even during the global financial meltdown, was projecting GDP growth of 6 percent for 2011. But the country faced numerous challenges, even before the protests unfolded, causing the Egyptian market to shed almost 17 percent in the span of two days and sending a ripple effect through the region.

Egypt's fiscal deficit is roughly 8 percent of GDP, compared with a median 4 percent for other Ba rating category, according to Moody's. Its public debt also was significantly higher than other countries in the same category.

Part of the problem stemmed from sizable subsidy costs. The government spends roughly 100 billion Egyptian pounds per year on subsidizing key commodities such as fuel and foodstuff, with roughly 63 million of its 80 million people receiving such help. Efforts to cut the subsidies - a key step to boosting spending in other sectors - were delayed by the world's recession two years earlier.

Under the best of circumstances, it would have been an unpopular move in a country where about 40 percent of the population lives on or below the World Bank-set poverty line of $2 per day.

"There is a strong possibility that fiscal policy will be loosened as part of the government's efforts to contain discontent," Moody's said.