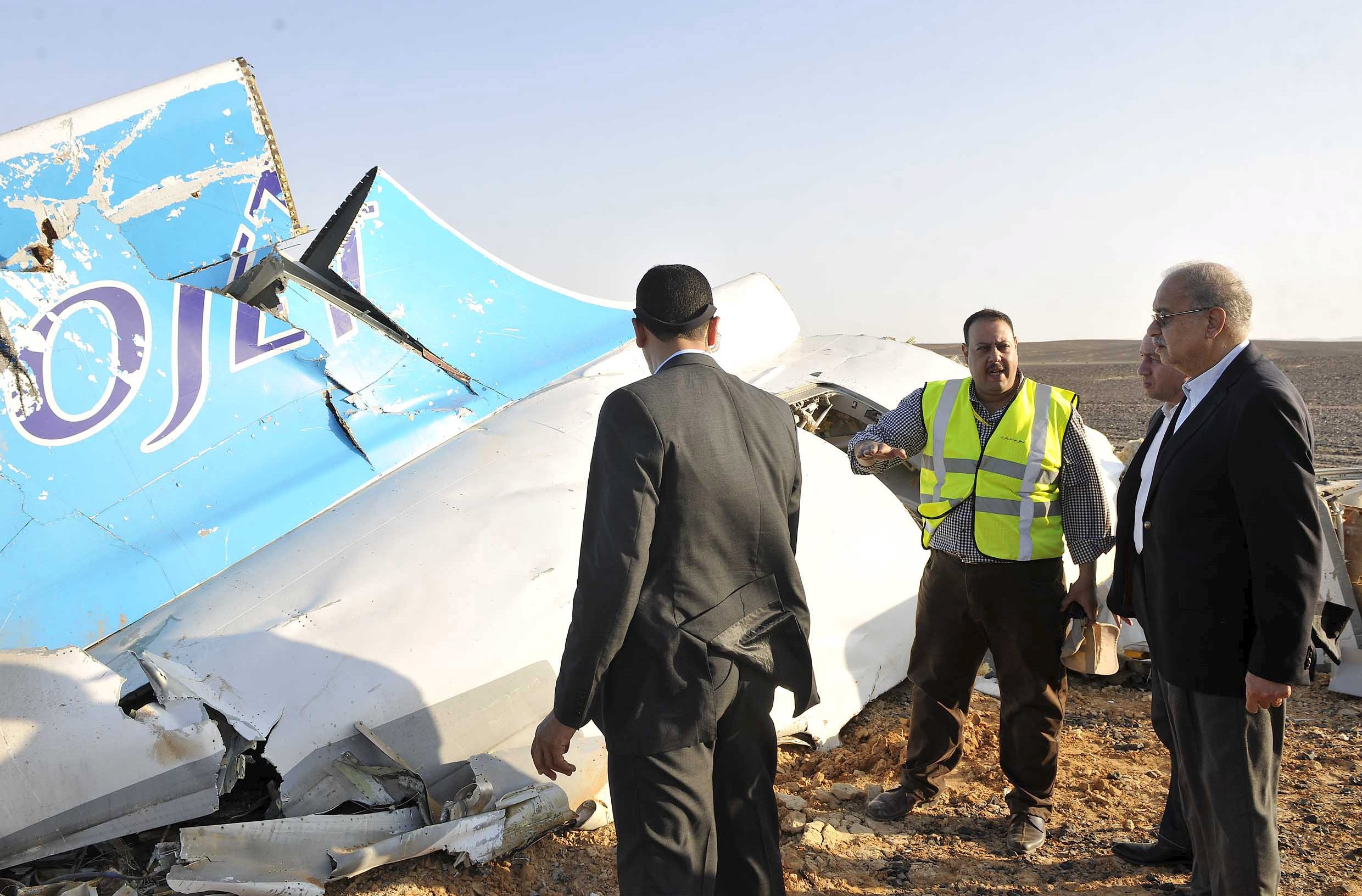 SHARM EL-SHEIKH, Egypt -- A Russian aircraft carrying 224 people, including 17 children, crashed Saturday in a remote mountainous region in the Sinai Peninsula about 20 minutes after taking off from a Red Sea resort popular with Russian tourists, the Egyptian government said. There were no survivors.

Almost everyone on board the Airbus-A321-200 operated by the Moscow-based Metrojet airline was Russian; Ukraine said four of its citizens were passengers. Russian officials did not give a specific breakdown of the 217 passengers' ages and genders, but said 25 were children. There were seven crew members aboard the 18-year-old Airbus 321-200.

A senior aviation official said the pilot had radioed that the aircraft was experiencing technical problems shortly before air traffic controllers lost contact with the plane.

The Russian Embassy in Cairo said on its Twitter account that there were no survivors. Russian investigators were searching the Moscow offices of Metrojet, the company that owned the plane chartered by St. Petersburg-based Brisco tour agency.

Most of the bodies recovered so far from the crash site were burned, said Egyptian military and security officials who spoke to The Associated Press on condition of anonymity because they were not authorized to brief the media. They said military rescue and search teams walked 2.4 miles on rugged terrain to reach the site.

President Abdel-Fattah el-Sissi offered his condolences to Russian leader Vladimir Putin in a telephone conversation, according to a statement issued by the Egyptian president's office.

A civil aviation ministry statement said the plane's wreckage was found in the Hassana area some 44 miles south of the city of el-Arish, in the general area in northern Sinai where Egyptian security forces have for years battled a burgeoning Islamic militant insurgency which is now led by a local affiliate of the extremist Islamic State of Iraq and Syria, or ISIS.

It said the plane took off from Sharm el-Sheikh shortly before 6 a.m. for St. Petersburg in Russia and disappeared from radar screens 23 minutes after takeoff. Egyptian Prime Minister Sherif Ismail briefly toured the crash site before he went to the Red Sea city of Suez where some of the victims' bodies were being taken before they are sent on to Cairo, the Cabinet statement said.

Friends and relatives of the victims were gathering at a hotel near St. Petersburg's Pulkovo airport. Psychologists were meeting with them in a large conference room off the lobby and police kept journalists away. Some left the room occasionally, looking drawn with tear-stained faces.

"She was a very good friend who was ready to give everything to other people. To lose such a friend is like having your hand cut off," Zaitseva said, adding that Rodina's parents feel "like their lives are over."

Russian airlines became infamous for poor safety in the early years following the 1991 collapse of the Soviet Union, which brought severe financial troubles and regulatory disorder. Although accidents have diminished in recent years, crashes persist, many of them blamed on human error.

Although details of what caused the crash were unclear and the pilot reported technical difficulties, ISIS claimed responsibility for bringing the plane down. They offered no evidence at all and are not known to have the capability to do so.

Russian Transport Minister Maxim Sokolov said officials from Moscow and Cairo were in touch over the incident. The Egyptian officials, he said, had no information confirming the ISIS claim. "Based on our contacts with the Egyptian side, the information that the airplane was shot down must not be considered reliable," he said, according to a report by the Interfax news agency.

Militants in northern Sinai have not to date shot down commercial airliners or fighter jets. There have been media reports that they have acquired Russian shoulder-fired, anti-aircraft missiles. But these types of missiles can only be effective against low-flying aircraft or helicopters. The Russian airliner that crashed on Saturday was cruising at 31,000 feet when it lost contact with air traffic controllers, according to Egyptian aviation officials.

CBS News' Alex Ortiz reports from Cairo that online flight trackers show that the plane had reached a cruising speed of 400 knots before suddenly dropping to 28,000 feet and dramatically slowing to 93 knots. Then contact was lost.

In January 2014, Sinai-based militants claimed to have shot down a military helicopter; Egyptian officials at the time acknowledged the helicopter had crashed, but gave no reason.

According to Russian news agencies, the airliner was a charter flight under contract with the St. Petersburg-based Brisco tour company. The plane was made in 1997 and has since 2012 been operated by Metrojet, a Moscow-based airline.

In a statement on its website, Metrojet said the A321 received required factory maintenance in 2014. It identified the pilot as Valery Nemov and said he had 12,000 hours of flying experience, including 3,860 in the Airbus 321.

Officers from Russia's top investigative body are conducting searches and questioning employees at Metrojet and Brisco. Investigative Committee spokesman Vladimir Markin said investigators are also taking samples of fuel from the airport in the Russian city of Samara where the plane took on fuel Friday before heading to Sharm el-Sheikh.

Ismail's office said investigators had located the flight's recorders, or the "black box," and sent them to experts for analysis, the AFP news agency reports.

Earlier in the day, an Egyptian official with the government's Aviation Incidents Committee told local media that the plane had briefly lost contact but was safely in Turkish airspace.

The wife of the co-pilot said her husband had complained about the plane's condition, according to a Russian TV channel.

State-controlled NTV ran an interview Saturday with Natalya Trukhacheva, identified as the wife of co-pilot Sergei Trukachev. She said that a daughter "called him up before he flew out. He complained before the flight that the technical condition of the aircraft left much to be desired."

Mahgoub said the aircraft had successfully undergone technical checks while at Sharm el-Sheikh's airport. A technical committee from the company was headed to Sharm el-Sheikh to collect security camera footage of the plane while it sat at the airport, including operations to supply it with fuel and passenger meals as well security checks, he said.

The aircraft had overnighted at Sharm el-Sheikh's airport, according to the Cabinet statement.

Roughly three million Russian tourists, or nearly a third of all visitors in 2014, come to Egypt every year, mostly to Red Sea resorts in Sinai or in mainland Egypt.

"It is too premature to detect the impact this will have on tourism. We need to know what happened first," Tourism Ministry spokeswoman Rasha Azazi told the AP.

There was no sign of anything unusual at Sharm el-Sheikh's airport just hours after news of the disaster broke. Hundreds of holidaymakers, mostly from Europe and the Middle East, were arriving and departing. Flights in the afternoon were leaving at the rate of four to five per hour, with lines for international check-in spilling out the main gates.

"We were here for a week and had a great time, we only heard about the crash as we arrived at the airport," said Emily Bell, 21, from Portsmouth, England. "We enjoyed the beach and the nightlife."