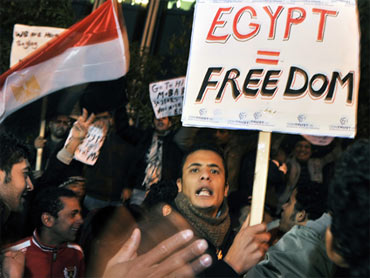 WASHINGTON - As protests in Egypt reached a roar on Friday, U.S. government officials scrambled to react both appropriately and in a diplomatic manner that did not upset their closest ally in the Arab world.

U.S. President Barack Obama spoke to Egyptian President Hosni Mubarak on the phone for 30 minutes late Fri., telling him he has a responsibility to take concrete steps to deliver on promises of better democracy and greater economic opportunity.

Obama emphasized the need for Mubarak to make reforms and said: "This moment of volatility has to be turned into a moment of promise."

Gibbs: U.S. May Cut Off $1.5 Billion in Aid to Egypt Over Protests

"This will be solved by the Egyptian people," Gibbs said. "We're monitoring a very fluid situation. This is not about picking a person or picking the people of a country."

review its $1.5 billion in aid to Egypt based on events unfolding in the country, where the authoritarian government is struggling to extinguish huge and growing street protests.

Additionally, the State Department is now urging Americans to defer any non-essential travel to Egypt and warning U.S. citizens already in the country to stay put until the situation stabilizes.

Egypt has been a key U.S. ally in the volatile region. U.S. officials are now increasing calls on President Mubarak, the target of the protesters, to respond with restraint and reverse steps taken to cut off the protesters' ability to communicate.

The decision to review assistance to Egypt is a significant step as the U.S. seeks to balance the desire to maintain stability in the region with a recognition of the unexpected scope and uncertain outcome of the protests.

Earlier Friday, Secretary of State Hillary Clinton said the U.S. is "deeply concerned" about the use of violence in putting down the protests, in which as many as eight demonstrators may have died since Tuesday.

"We call on the Egyptian government to do everything in its power to restrain security forces," Clinton said at a press conference Friday. "At the same time, protesters should also refrain from violence and express themselves peacefully."

Clinton, like many government officials, has struggled to strike the right tone between supporting an ally, and upholding the American ideals of democracy and freedom.

She sidestepped a question on whether the United States believed that Mubarak's regime was finished, but said that the U.S. wanted to work as a partner with both the country's people and government to help realize reform in a peaceful manner. That underscored concerns that extremist elements might seek to take advantage of a political vacuum left by a sudden change in leadership.

While talking about cutting U.S. foreign aid to Israel, the biggest recipient, Paul said it made no sense to also send it to Israel's neighbors.

"Are we funding an arms race on both sides? I have a lot of sympathy and respect for Israel as a...fountain of peace and a fountain of democracy within the Middle East. But at the same time, I don't think funding both sides of the arm race, particularly when we have to borrow the money from China to send it to someone else. We just can't do it anymore. The debt is all consuming and it threatens our well being as a country," Paul said.

Energy Secretary Steven Chu voiced concern about the potential impact of the growing unrest in the Arab world on energy supplies and prices.

Prices shot up about $2 a barrel in less than half an hour at midday after the White House expressed its concern about the violence in Egypt.

The dollar gained against the euro and the British pound on Friday as protests in Egypt continued, pushing investors to move to currencies they perceive as being safer bets.

The euro, used by 17 European countries, dropped to $1.3615 during afternoon trading Friday from $1.3729 late Thursday. The euro has risen over the past three weeks as investors have increasingly believed that European officials will launch a stronger attack on Europe's debt problems. The British pound fell to $1.5869 from $1.5935 late Thursday.