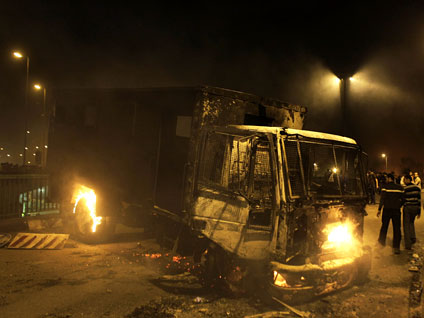 Thousands of protesters have taken to the streets in massive demonstrations across the Arab world as a wave of unrest spreads from Tunisia to Yemen and Egypt, threatening a number of longstanding regimes, shaking stability in North Africa and the Middle East and creating serious diplomatic problems for the United States.

Anger in the Arab World
Pictures from Cairo

(At left, CBS News Correspondent Elizabeth Palmer reports from Cairo on the fourth day of protests.)

Below are the latest updates of the anti-government demonstrations in Egypt:

8:05 p.m. ET Richard Haas, president of the Council on Foreign Relations, told CBS News' Harry Smith that for the United States "the stakes here are enormous".

"If instability comes to Egypt, it will send shockwaves throughout the rest of the Arab world," Haas told Smith. "It's the first country to establish peace with Israel. It's, indeed, the cornerstone of what peace there is in the Middle East. So if the United States is seen to pull the rug out from under this friend which, as you noted in the report, a friend for some three decades, it will raise major questions about American reliability. On the other hand, if we're seen to give him an uncritical embrace, it could risk alienating the Egyptian people and some future government we may have to work with."

Obama: U.S. Will Stand for Rights of Egyptians

6:36 p.m. ET President Obama said in a televised statement from the White House that he spoke with Egyptian President Hosni Mubarak after the troubled leader spoke on state television.

6:34 p.m. ET President Obama calls on Egyptian authorities to "refrain from any violence against peaceful protesters" in a televised statement from the White House.

6:27 p.m. ET President Obama will make a statement from the White House on Egypt shortly.

5:48 p.m. ET "With all the power that the constitution gave me, I assure you that I'm working for the people and giving freedoms of opinion as long as you're respecting the law," Egyptian President Hosni Mubarak said on state television.

5:24 p.m. ET "It's not going to be allowed that things are going to be robbed and stolen and fires set," Egyptian President Hosni Mubarak said in a statement broadcast on Egyptian television.

Thousands of anti-government protesters continue to fill the streets. They tried to storm two government buildings. Hundreds of people were looting TV sets and electric fans from the burning complex of buildings used by the major party.

Egypt deployed its military on the streets to try to enforce the curfew.

It followed a day of protests that stretched across nearly half the provinces in Egypt. One protester was killed, bringing the death toll from four days of protests to eight.

5:10 p.m. ET (AP) The deployment of troops in the streets of Cairo hasn't been met with the same sort of anger that protesters displayed against the police, who have a reputation for brutality.

Instead, hundreds lined the streets, waving and cheering at the troops. Some climbed on the vehicles and tried to shake hands. And others chanted pro-army slogans.

But on one bridge over the Nile, protesters tried to block some military vehicles with metal barricades.

5:03 p.m. ET Sometime very early Friday morning, Egyptian authorities cut their country off from the Internet. So how did they do it? Turns out that it's not as hard as it might seem at first blush.

4:54 p.m. ET Al-Jazeera reports that the speaker of Egypt's parliament has announced that "an important matter will be announced in a short time".

4:26 p.m. ET (ReadWriteWeb) Al-Jazeera has released photographs of the uprising on flickr and video on its website to use for free with attribution under a Creative Commons license, tech blog ReadWriteWeb reports.

3:49 p.m. ET (Reuters) The Egyptian Museum of Antiquities, also known as the Egyptian Museum, has been secured by the Egyptian army, according to a report the Reuters news agency saw on state television. The central Cairo museum is the home of such items as the golden death mask of King Tut.

The state TV report comes after Reuters previously reported that looters took furniture, computers and other items from the nearby headquarters of the state ruling party, which is now on fire.

3:26 p.m. ET "We're monitoring a very fluid situation," White House press secretary Robert Gibbs said in response to a question from CBS News Correspondent Chip Reid on why President Obama isn't at Friday's press briefing. "I don't doubt that by the time I have finished here it will have changed more."

3:20 p.m. ET (Time magazine) "We believe that Egypt is going to overcome the current wave of demonstrations, but we have to look to the future," an Israeli minister told Time magazine. "Having said that, I'm not sure the time is right for the Arab region to go through the democratic process."

2:50 p.m. ET (The Washington Post) "For now, we need to walk on both sides of street, stay close to the government and work the opposition hard for new sources and contacts," a senior former Central Intelligence Agency operations official told The Washington Post's SpyTalk blog on background in a post on what the agency should be/might be doing in Egypt.

2:41 p.m. ET (AP) An Obama administration official says the U.S. will review its $1.5 billion in aid to Egypt. The official spoke on condition of anonymity because of the delicacy of the situation.

The decision to review assistance to Egypt is a significant step as the U.S. seeks to balance the desire to maintain stability in the region with a recognition of the unexpected scope and uncertain outcome of the protests.

2:16 p.m. ET (AP) The State Department is urging Americans to defer any non-essential travel to Egypt and warning U.S. citizens already in the country to stay put until the situation stabilizes.

1:57 p.m. ET Al-Jazeera reports that a group of Egypt's presidential guard is making its way toward Egyptian state television, presumably to guard it from demonstrators.

(Warning: The video at left of protesters in Cairo clashing with police is graphic.)

1:42 p.m. ET (AP) EgyptAir said its flights from abroad will be able to land, but departures were canceled from 9 p.m.

Separately, a Cairo Airport official said a number of international airlines had canceled flights to the capital, at least overnight. The official was not authorized to speak to the media and spoke on condition of anonymity.

1:38 p.m. ET (AP) Egypt's national carrier says it has suspended its flights from Cairo for 12 hours.

1:33 p.m. ET (AP) Al-Jazeera reports that the fire burning the headquarters of Egypt's ruling party, the National Democratic Party, in Cairo has raised concerns that it will spread to the nearby Museum of Egyptian Antiquities.

1:23 p.m. ET (AP) Stocks fell broadly as the unrest in Egypt worsened. The dollar, Treasurys, gold and other assets seen as safe rose.

"Traders are watching this flare-up in the Middle East and using it as a reason to take profits," said Doug Godine, managing director at Signal Hill, an investment bank.

Prices of Treasury bonds, considered one of the safest assets, rose sharply. The yield on the benchmark 10-year Treasury note fell to 3.34 percent from 3.38 percent late Thursday. Bond yields move in the opposite direction of their prices.

1:17 p.m. ET (AP) President Obama has convened his national security team on the growing protests in Egypt as aides voice concern about violent clashes between demonstrators and police.

At the same time, spokesman Robert Gibbs called on the Egyptian government to respect the rights of protesters and restore Internet access, which has been halted as the protests spread.

Mubarak earlier Friday ordered a nighttime curfew in Cairo, the Mediterranean port city of Alexandria and the flashpoint city of Suez east of the Egyptian capital.

1:02 p.m. ET (AP) Secretary of State Hillary Clinton is appealing for Egyptian authorities to respect the rights of their citizens.

Clinton urged calm on both sides and said the government must investigate and prosecute any allegations of brutality by security forces against protesters. She also called on Egypt to restore access to the Internet and social media sites that have been blocked.

Clinton's comments to reporters at the State Department came as the Obama administration has stepped up pressure on its longtime ally Egypt to listen to voices of discontent.

12:53 p.m. ET (AP) The military deployed on the streets of Cairo to enforce a nighttime curfew as the sun set Friday on a day of rioting and chaos that was a major escalation in the challenge to authoritarian President Hosni Mubarak's 30-year rule.

Thousands defied the night curfew in the capital Cairo and were trying to storm two major government buildings -- the state TV and the Foreign Ministry. Others were praying on the streets of Cairo after nightfall.