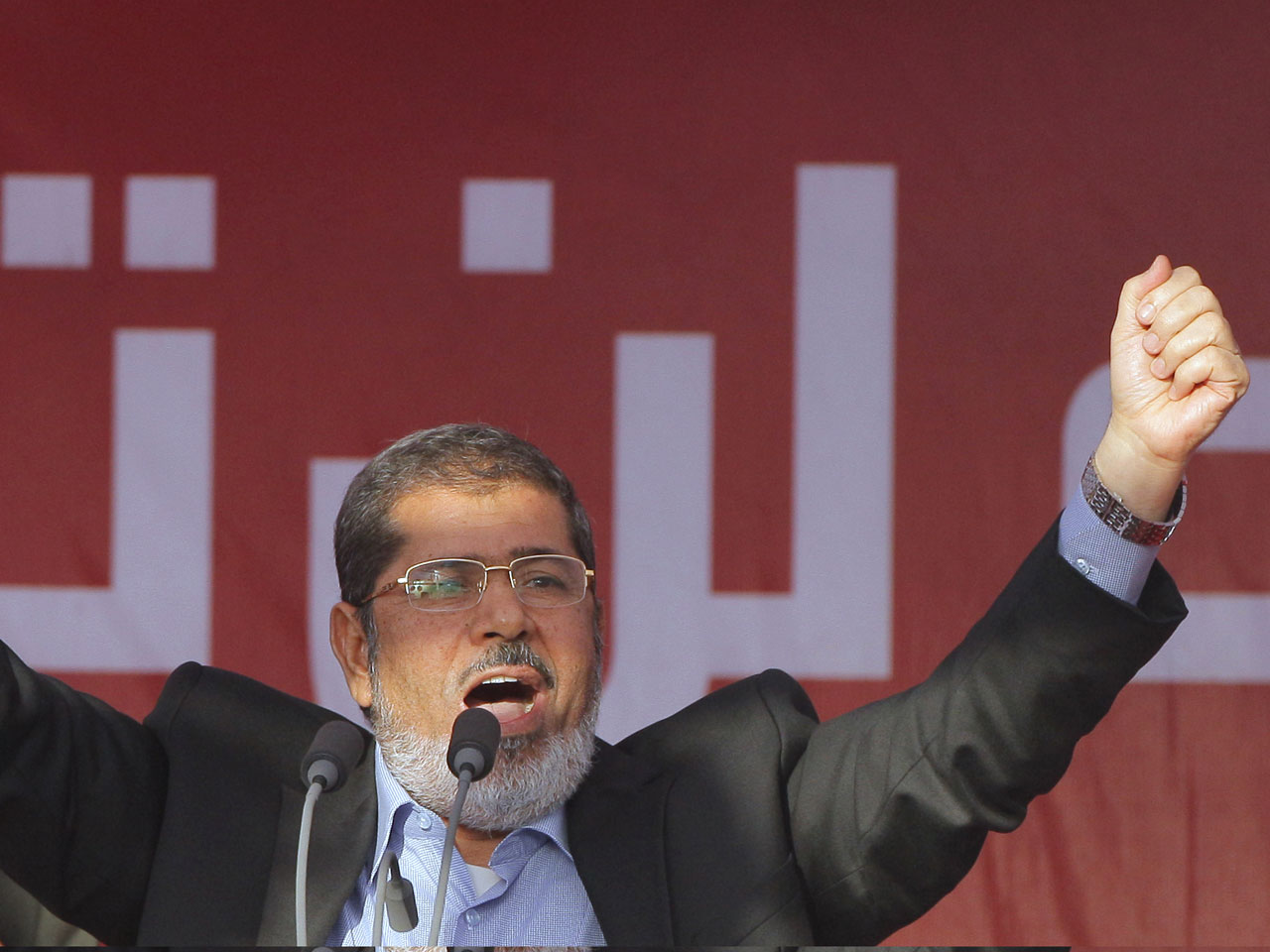 CAIRO The Gaza cease-fire deal reached Thursday marks a startling trajectory for Egyptian President Mohammed Morsi: an Islamist leader who refuses to talk to Israelis or even say the country's name mediated for it and finally turned himself into Israel's de facto protector.

The accord inserts Egypt to an unprecedented degree into the conflict between Israel and Hamas, establishing it as the arbiter ensuring that militant rocket fire into Israel stops and that Israel allows the opening of the long-blockaded Gaza Strip and stops its own attacks against Hamas.

In return, Morsi emerged as a major regional player. He won the trust of the United States and Israel, which once worried over the rise of an Islamist leader in Egypt but throughout the week-long Gaza crisis saw him as the figure most able to deliver a deal with Gaza's Hamas rulers.

"I want to thank President Morsi for his personal leadership to de-escalate the situation in Gaza and end the violence," U.S. Secretary of State Hillary Rodham Clinton, who met Morsi Thursday, said at a Cairo press conference with Egypt's foreign minister announcing the accord.

"This is a critical moment for the region. Egypt's new government is assuming the responsibility and leadership that has long made this country a cornerstone of regional stability and peace," she said.

After Israel launched its assault on Gaza a week ago, aimed at stopping militant rocket fire, Morsi's palace in a Cairo suburb became the Middle East's diplomacy central.

He held talks with Turkey's prime minister and the emir of Qatar, Germany's foreign minister and a host of top Arab officials to get them behind his mediation. An Israeli envoy flew secretly into Cairo for talks with Egyptian security officials, though Morsi did not meet or speak directly with any Israelis.

Throughout it all, Morsi and his aides sided openly with Hamas, accusing Israel of starting the assault and condemning its bombardment, which has killed more than 140 Palestinians. Five Israelis have been killed by Hamas rocket fire during the battle.

Morsi hails from the fundamentalist Muslim Brotherhood, Egypt's most powerful political group and Hamas' own parent organization. Brotherhood leaders, including Morsi, refuse to speak to Israeli officials. Morsi hasn't even said the name of the country publicly since he was inaugurated in late June, though he has referred to its people as "Israelis."

In ideology, the Brotherhood supports the use of force against Israel to liberate "Muslim lands." Only two months ago, Brotherhood supreme leader Mohammed Badie proclaimed that regaining Jerusalem can "only come through holy jihad." The group opposes Egypt's 1979 peace treaty with Israel.

But since coming to power, the group has had to yield to pragmatism. The Brotherhood and Morsi have promised to abide by the peace accord. Through a military operation and through dialogue, Morsi has tried to rein in Islamic militants in the Sinai Peninsula who have attacked Egyptian security forces and across the border into Israel.

When the Israeli offensive began, President Barack Obama spoke to Morsi after talking to Israeli Prime Minister Benjamin Netanyahu. While Obama and Morsi disagreed over whom to blame for the violence, they agreed to work together to halt it.

That Israel was comfortable with an Islamist like Morsi mediating may not be a measure of trust as much as a realization that only the Egyptians can persuade their Hamas cousins to enter a deal and ensure an end to rocket attacks.

The cease-fire announced Thursday defines Egypt as the "sponsor" of the deal to which each side would appeal over violations. That potentially puts Egypt in the uncomfortable position of ensuring militants in Gaza don't fire rockets. If the deal falls apart -- whichever side is to blame -- Egypt could face damage to its credibility or strained ties with one side or the other.

An ally of Israel and deeply opposed to Hamas, Mubarak's regime helped Israel blockade Gaza after Hamas seized the territory in 2007. When Israel and Hamas last went to war in 2008, Mubarak was accused by critics of secretly supporting Israel's ground offensive.

During that offensive, far bloodier than the past week's, Mubarak kept the sole border passenger crossing between Egypt and Gaza mostly shut, preventing some of the more seriously wounded Palestinians from receiving treatment in Egyptian hospitals. Mubarak's regime was also wary of any deals that would legitimize Hamas' rule in Gaza. Mubarak feared that a strong Hamas would embolden Islamists at home, particularly his nemesis, the Brotherhood.

Morsi has not completely thrown open the crossing as Hamas would like. But during the past week, Egypt let in wounded Palestinians and bolstered Hamas with waves of delegations entering Gaza to show their support -- from Egyptian activists to the foreign ministers of Turkey, Qatar, Algeria, Sudan and others.

Morsi also dispatched his prime minister to Gaza soon after hostilities began on a heavily symbolic visit. A photograph of a tearful Hesham Kandil kissing the lifeless body of a Palestinian child was splashed across the front page of every Cairo newspaper.

Since his presidency began, Morsi has used foreign policy to make a splash. Critics say that allows him a high international profile with little accountability and is easier than tackling the daily hardship of a population already weighed down by unemployment, price hikes and surging crime.

Morsi began with a hard hitting speech in Iran last August calling on Tehran's ally Syrian President Bashar Assad to step down. He founded a working group with Iran, Turkey and Saudi Arabia to look for an end to Syria's civil war. It has gone nowhere and the Saudis have since pulled out, but, Morsi is none the worse for it.

Gaza is more hazardous for him if the cease-fire fails. Egyptians feel strongly about what they see as decades of suffering by the Palestinians at the hands of Israel. Their opposition to Israel runs deep after four full-blown wars with it in six decades. A resumption of Israeli attacks on Gaza, for example, could land Morsi in hot water with the Egyptian public.

Also, Morsi has to contend with growing criticism by critics that his preoccupation with Gaza pulled him away from pressing issues at home.

More than 50 children were killed last week when their school bus was hit by a train at a railway crossing in southern Egypt, an incident that led to charges of negligence against Morsi's government. Street protests against his policies and the Brotherhood left one person dead and hundreds wounded in Cairo since Monday. Charges of illegitimacy now swirl around a panel drafting a new constitution after liberals and Christians pulled out in protest against the domination of the process by Morsi's Islamist allies.

On top of that, Egypt announced Tuesday it reached an initial understanding with the International Monetary Fund for a $4.8 billion loan to kick-start the ailing economy. Egypt will have to reduce subsidies from basic items like fuel, risking social unrest over price hikes.

"Morsi's popularity can't go on eroding like this forever" without a backlash, said rights activist Mohsen Kamal. "He is vulnerable to dramatic and maybe even violent changes if he ignores what is happening."

Sensing the mounting problems at home, Morsi called off plans to travel to Pakistan for a summit of eight Islamic nations, sending his vice president instead.

Morsi will stay home, an official announcement said, "to follow up on domestic issues and the observation by all parties of the cease-fire in Gaza."