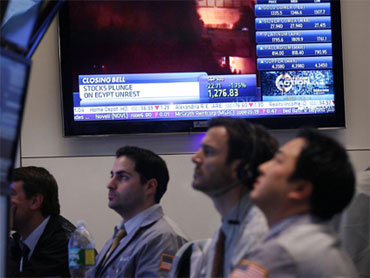 The political unrest that has swept Egypt this past week has left that country in a "difficult" economic state, an Egyptian economist said Sunday.

Salah Al Desouky told AP Television News that Egypt's economy has been unable to bear the current political crisis, with banks closed and production lines stopped. The Egyptian stock market's benchmark index fell about 17 percent before the weekend, and has been shut since. Some foreign companies are pulling their staffers from the country.

Egypt had enjoyed relatively robust economic growth rates. But unemployment is unofficially estimated at more than 25 percent. Food price inflation has been at about 17 percent per year. Rampant poverty and income inequity have all served as a catalyst for the popular uprising.

Tourism - one of the four top sources of foreign revenue for the country - is expected to take a big hit. And the government's virtually complete shutdown of Internet access may undercut investor confidence in the country (especially if your business is a call center).

Already markets across the Middle East dropped on fears that the unrest will destabilize the economy of Egypt and the surrounding region.

"The end-game in the political crisis in Egypt remains uncertain," investment giant Citigroup said in a research note. "The position of (Mubarak) is looking increasingly tenuous, although it is far from clear how any transfer to a new political order will proceed, and over what timeline."

Citigroup said concerns that are stoked by the unrest in Egypt are tied to whether it will spread to other autocracies, disruptions in oil supplies, and any change in the regional power balance that threatens Israel.

Egypt dominated market sentiment Monday as investors fretted about the potential impact on oil supplies and whether any other government in the region may soon face the wrath of its people.

Turning Off the Spigot

The main source of uncertainty in the markets at the moment centers on what may happen to oil prices should the unrest in Egypt turn even uglier or spread to other countries in the region.

Though Egypt's oil production is minimal, the country does control the Suez Canal - a key route for oil tankers and cargo ships as they steer from the Persian Gulf to the major oil-consuming nations in Europe.

That fear has underpinned oil prices, and the price of Brent crude oil in London was at 28-month highs (near $100 a barrel) on Monday. U.S. crude, as traded on the New York Mercantile Exchange, is not far behind - at around $90 a barrel. 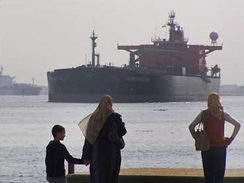 (AP PHOTO)
The New York Times writes that while Egypt is not an oil exporter, its strategic importance as home to the Suez Canal (left) and the nearby Sumed pipeline may factor into an impact on global energy prices.

According to Energy Department data, in 2009 roughly 2.9 million barrels of oil passed through the canal and pipeline every day. Though a small amount by global standards (less than 3% of world production), a blockage there could have an impact on oil trading, and could severely hamper supplies in Europe.

"The most pressing concern for global markets is the potential for knock-on effects on oil flow if turmoil starts to spread from Egypt across other countries in the region," said Jane Foley, an analyst at Rabobank International.

Ratcheting oil prices will boost fears that the high rates of inflation in a number of economies will prove not short-lived, as many central bankers suggest. Inflation has risen up the list of investor concerns over the past few weeks and figures earlier Monday showed price rises in the 17 countries that use the euro running at a 27-month high of 2.4 percent in January.

Wall Street had a fairly subdued opening - the Dow Jones industrial average was up around 10 points at 11,833 soon after the open while the broader Standard & Poor's 500 index rose about 5 points to 1,281.

China's Shanghai Composite index gained 1.4 percent to 2,790.69 amid some last-minute buying ahead of the Chinese Lunar New Year that will shut down trading Feb. 2-8. The Shenzhen Composite Index for China's smaller, second market rose 1 percent to 1,197.67.

As a market, Egypt is for the most part a small player (though it is a major importer of wheat; changes in imports could have negative effects on grain prices elsewhere). But Asian economies dependent upon selling to the Middle East could be hit if the unrest that has played out in Egypt and Tunisia spreads to other countries.

Analysts at Nomura, a Tokyo-based financial services group, wrote that the effects from a weakening of exports could include higher commodity prices and inflation.