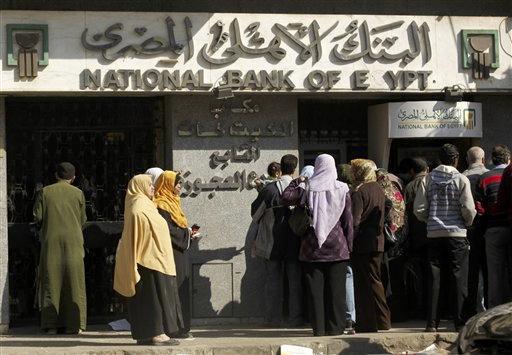 CAIRO (AP) - The closure of Egypt's banks for two of the past three weeks has added strain on an economy already reeling from the evaporation of tourism and a prolonged stock market closure caused by the political upheaval that ousted longtime leader Hosni Mubarak.

The closures were ordered after protests and strikes by poorly paid bank workers, some of them demanding a purge of executives they accused of corruption. Concerns over a lack of security also factored into the decision. Most police disappeared from the streets a few days after the revolt began on Jan. 25 and many have not returned.

The bank shutdown and the draining of ATM machines have paralyzed businesses and left ordinary people scrambling for cash. The economy has been crippled by the unrest, which has forced many businesses to shut and factories to halt production. More than 150,000 tourists fled, dealing a blow to one of Egypt's top sources of foreign revenue.

The stock market is not set to open again at least until Sunday, which would make it a three-week shutdown. The benchmark stock index fell about 17 percent in two sessions before it closed on Jan. 28. Initially, trade was halted while authorities put in place measures to curb any more sharp and sudden drops amid the instability. Then the strikes and bank closures prolonged the shutdown.

"We are in an environment of a revolution," said Tarek Amer, board chairman of the National Bank of Egypt, the country's largest public sector bank. "Companies are not able to conduct their business in the best manner," added Amer, who is also on the Central Bank's board. "If this continues, it could affect investor confidence."

The protests by bank workers are just a small slice of the labor unrest rekindled by the uprising against Mubarak's regime. Virtually every sector has seen stoppages or protests, from the airlines to textiles and steel to ship repair services along the Suez Canal.

The ruling military council that took power from Mubarak on Friday has issued two statements in the past three days calling for all labor unrest to end immediately. That has raised expectations that the council may soon ban all protests and strikes, something that would almost certainly raise tensions at a time when many are already feeling anxious about Egypt's uncertain future.

"If, of course, workers demand more and, as a result, they strike and these strikes continue over a period of time, this will have a destabilizing factor," said John Sfakianakis, chief economist with Banque Saudi-Fransi in Saudi Arabia. "It will impact on the confidence and reputation of the Egyptian banking sector," he added. "It could have ripple effects for ... the private and public economy."

Banks remained open the first few days of the 18-day democracy uprising. But after a weekend of looting, arson and lawlessness on Jan. 28-29, they closed for a week and many ATMs were damaged or ran out of cash. The following week, the banks closed. They reopened the week of Feb. 6-10 and this week on Sunday - the first weekday after Mubarak's ouster. They closed again on Monday amid growing labor unrest and the central bank ordered them to remain shut at least until the start of next week on Sunday.

Companies and individuals are feeling the pinch.

ATM machines are running out of money. Executives with some companies say the unrest, compounded by the bank closures, have made it difficult to secure credit, pay suppliers and maintain operations.

Analysts and bank officials downplayed Egyptian media reports that the bank closures are linked to top businessmen trying to get their money out of the country as anti-corruption momentum builds. Top officials in Egypt are widely suspected of having siphoned off billions of dollars in state revenues through shady deals over the past three decades of Mubarak's rule and some former ministers have had their assets frozen pending investigation into corruption allegations.

In part to stave off such capital outflows, the Central Bank had capped all transfers at $100,000.

The military-led caretaker government has sought to re-establish a measure of normalcy after Mubarak's ouster. Banks reopened on Sunday and officials breathed a sigh of relief when a much-feared run on them did not materialize. Factories flipped the switch to start operations, and millions of Egyptians who had been unable to head to work, collect salaries or go about daily life got back to routines. But all that was quickly disrupted by burgeoning strikes and protests over a range of grievances.

The crisis has already exacted a heavy toll on the economy, although the full weight will only be revealed with time.

A week ago, Credit Suisse estimated that the unrest had cost the country at least $310 million per day, and predicted the Egyptian currency would come under heavy pressure as investors shifted to dollar deposits or pulled their money out entirely.

The projections for economic growth this year were quickly revised down from 6 percent to between 2 and 4 percent.

The government will face pressure to increase spending to mollify the masses while key revenue sources such as tourism, foreign direct investment and taxes take a beating.

And the unrest could scare away investors who view Egypt as too unstable for now. That poses a particular problem for the financial sector.

The country's banks had long been a source of pride for the Mubarak regime, which argued that a strong regulatory environment and their lack of investments in the kind of toxic assets that hammered Western banks helped Egypt weather the worst of the global financial meltdown.