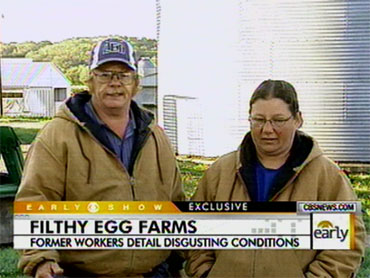 A couple who worked at one of the two Iowa egg farms faulted in the recent massive recall say they blew the whistle on unsanitary conditions at one plant -- and no one listened.

Rather, Robert Arnold said on "The Early Show on Saturday Morning," he and his wife, Deanna, were told the practices and conditions they cited, such as repacking old eggs as fresh, were standard operating procedure and to just go back to work.

He says he regrets that they didn't press on with their complaints.

Some 550 million eggs have been recalled and some 3,000 people report salmonella symptoms apparently related to eating tainted eggs.

The other giant egg farm cited in the salmonella outbreak is Hillandale Farm.

She says the company routinely took eggs returned by grocery stores and repackaged them as fresh.

"I blame (Wright County) management for that," Robert remarked to CBS News.

The USDA says its workers were there solely to inspect eggs for labeling, but tell CBS News their employees say they don't remember any of the conditions or complaints.

Wright County Egg issued its own response to Arnolds' claims, saying, "Anytime there is a perceived issue on our farm, we expect our employees to immediately bring it to our attention, so that we may address it appropriately and swiftly. That is our policy, and that is their responsibility. To the best of our knowledge, no concerns were ever raised."

On "The Early Show on Saturday Morning," he told co-anchor Rebecca Jarvis, "The stuff that I seen there, you come to work in the morning, you'd see -- supposedly it was all cleaned up and you would see egg yolk underneath the belts mixing up with the grease from the gears and stuff. You would see old eggs getting repacked and putting today's date on them. When I'd question that, it was, 'Oh, we do that all the time. Just go back to work."

Robert told Jarvis he went to his supervisors with his concerns. "I would," he said, "look and I'd say, 'You know, these eggs are like five, six weeks old. Why are we putting today's date on them?' 'Oh, well, (he was told in response), they do that all the time.' That's what I was told."

He says he wouldn't eat eggs from the plants he worked in. "It's like somebody going to the candy store and getting a chocolate bar that's like two months older. I mean, it should have been taken off the shelf," Arnold explained.

When told of Wright County Egg saying "no complaints were ever raised" by himself or Deanna, Robert replied, "You sit there and you tell a supervisor, 'This ain't right. You know, we're putting old eggs into the containers. We're putting today's date on them.' That's as far as it went. (They'd say) 'Robert, you just - OK, that's just the way it is. Go back to work and finish out your day,' and that's as far as it goes.

" … I'm not saying they're lying. I'm just saying maybe the main office didn't hear about it because, like I said, you're in the plant. You're working. "(You're told) 'That's the way it is, Robert. Just go back. Go back to work." '