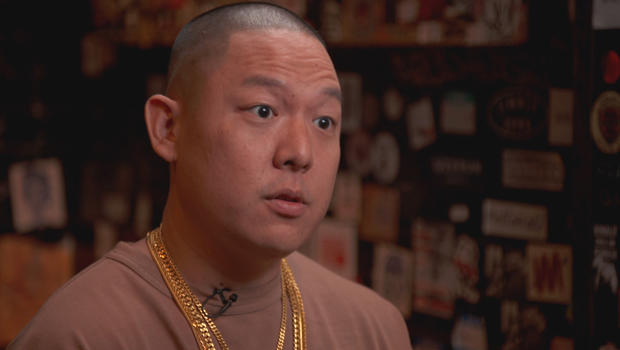 Eddie Huang is a restaurateur, a streetwear designer, a TV show host, and most famously the author of "Fresh Off the Boat," his 2013 memoir of growing up the eldest of three sons of Chinese immigrants. The book spawned a hit ABC sitcom.

In most everything he's done, Huang said his aim has been to smash the so-called "model minority myth" about Asian-Americans, which he describes this way:

"Turn the other cheek?"

"Yeah. I think that it's, in America there is a desire to identify, to describe, and then categorize people."

In Huang's battle to define himself, food was his beachhead.  When he heard pork buns, a savory Chinese snack of pork nestled in the bread known as bao, being described as "New American" cuisine, he was, well, steamed!

"This is a dish from the night market in Taiwan since the '50s," he said. "It really upset me. No one even knows where Taiwan is. Like, when I was growing up people thought we were from Thailand, you know? I just wanted to put it out and say, 'Hey, this is our dish.'"

Baohaus has a vibe that's all Huang, who said, "I spent a lotta my time hanging out with other kids at gas stations, video stores, record shops, comic book shops. So, I wanted to create a restaurant that had that feel of a skate shop or a record shop."

When he was 31, "Fresh Off the Boat" was published. In it, Huang described his upbringing first in Washington, D.C., then in Florida, where his father became a successful restaurant owner.

Rocca asked Eddie's father, Louis Huang, "When friends or relatives say to you, 'What does Eddie do?' How do you describe it, what do you say?"

Yes, Eddie is also a lawyer. But his parents Louis and Jessica and his brother Evan say they're proud of all he's done.

"Eddie has lived his dream, his goal, as an individual, that I'm so proud of," Jessica said. "And he wants to do business. And he likes to raise the awareness of a different culture."

"He tells me, 'Chinks get to the back,' and pushes me down on the lunch line. But even as a third grader I recognized, I was like, 'Dude, you're just picking on me 'cause I'm the only person below you on the totem pole!' But the whole time I was not mad at the kid, because I knew where it came from. That kid, Edgar, was picked on all the time."

And so was Eddie. "When I grew up, I was just told, 'You're short, no one's gonna want you. You're ugly, you're gonna have a mole with a hair growth comin' out like that old Cantonese guy over there!'"

Rocca asked, "You were told that by whom?"

"There's so many people … The reason I'm pausing is 'cause I'm trying to remember the first one but, like, I can't!"

And then there were the cruel jokes about his manhood. Warning: Huang's recounting of this memory may be too candid for some.

"I remember reading this Maxim magazine article in, I think, ninth or tenth grade," he said. "And it showed, around the world, six inches is the global average. And I immediately went to my desk, and I remember, there was a Washington Mutual ruler, 'cause I had just opened, like, a kids' bank account, right? I put it and I was like, 'Six inches, I'm good! I'm good!' And from that point on I was just like, 'I'm okay; I'm average.' Like, I just wanted to be average; I just wanted to be normal."

Rocca asked Eddie's parents, "Was it hard for you to read the parts of the book where he described physical punishment at home?"

"Not at all. Not at all," said Louis. "That's a different culture. You know, punishment, discipline, it's very important, fundamental for leadership. And I want them to be leaders."

Eddie said. "In his mind he was making us stronger men, but we got no room to make mistakes. It was, any little thing, we were gonna get hit. And I think that was unfair."

Eddie's brother, Evan, noted, "My parents, my mom especially, will still yell at us all the time."

"And it's not always funny, even now, right?" asked Rocca.

"No, she sends threats all the time, like, that long on text!" Evan laughed. "It's very entertaining."

"It's okay, we need to communicate," Jessica said. "I feel, being polite is also a sign of distance. You know, you just have to do it right. Hold each other together and support each other."

At the ripe old age of 37, Eddie Huang says he's mellowed.  When he hosted an episode of his Viceland cable show from mainland China, eating red braised pork – a dish that for Huang means family – became an emotional experience. "It's really powerful to come home," he noted.

When he made his own version of the dish at a dinner in Manhattan, it hit the spot with his most important audience. "It melts in your mouth," Jessica said.

His dad Louis added, "It tastes awesome. Most of people don't understand it, but I know where it comes from. This is Eddie's version. It's the one and only Eddie Huang's red-braised pork."

Oh, and did we mention, in addition to all his other endeavors, the one and only Eddie Huang has also modeled underwear?

"I was like, 'I don't think anyone is ever gonna ask a short, fat, Chinese dude to model their underwear.' So, I was like, 'I gotta do it!'"