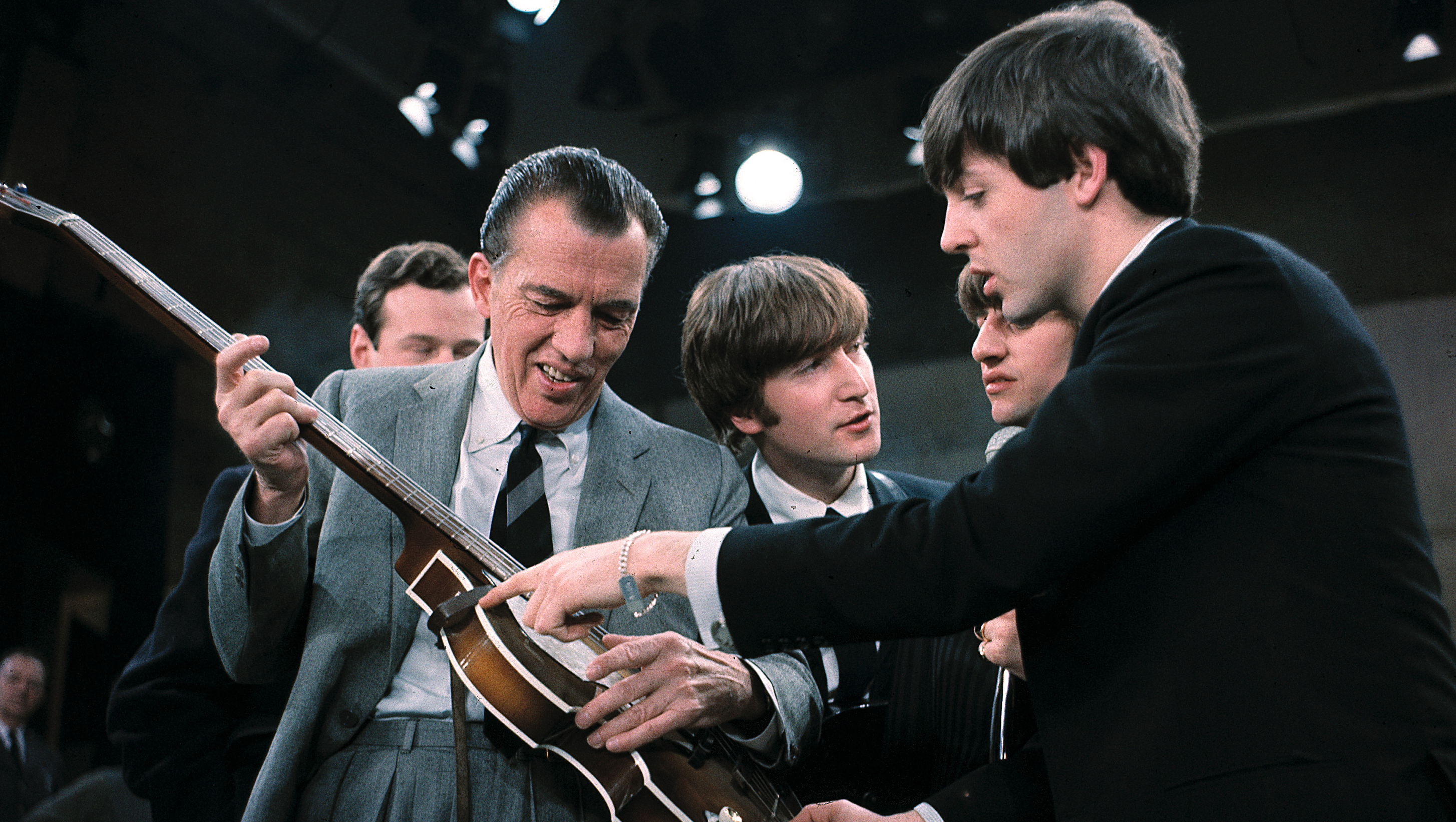 A large piece of stage backdrop autographed by the Beatles during their first live U.S. concert 50 years ago is headed to auction, where it could draw $800,000 to $1 million.

Face caricatures accompany the signatures that the Fab Four penned between sets of their historic Ed Sullivan appearance on Feb. 9, 1964, which they opened with "All My Loving" in front of 700 screeching audience fans and 73 million television viewers.

The current owner of the 4-foot-by-2-foot plastic wall section is Andy Geller, a longtime Beatles collector and television and film voice-over artist. It is being sold in New York City on April 26 through the Dallas-based auction house Heritage Auctions.

Believed to be the largest Beatles autograph, a stagehand is responsible for getting the band members to sign the back of the wall section known as a hardwall traveler, which is rolled back and forth to reveal the next act.

"It was a spur of the moment thing," 81-year-old Jerry Gort said in a telephone interview from his Calabasas, Calif., home. "They came down from stage right from their dressing rooms, I gave them a marker and asked them to sign the wall."

The band signed vertically from the bottom up: John Lennon first, then Paul McCartney, who scribbled "Uncle Paul McCartney," followed by George Harris. Ringo Starr, shorter than the rest, couldn't reach the top so "I put my arms around him and lifted him," said Gort, simultaneously putting his foot on the wall to keep it from opening until Ringo finished signing the piece.

Gort said Ringo then "made a mad dash to get to his drums" and the band launched into "I Saw Her Standing There" and "I Want to Hold Your Hand."

The wall also contains the signature of other acts that followed later in the television season, notably from the Searchers, another British band that signed "The Searchers Were Here with Kilroy 4/5/64."

At the end of the season, the wall was destined for the trash heap -- but was saved by another carpenter for a young disabled Beatles fan.

Geller said he purchased the wall privately for over $100,000 in 2002 without knowing its history.

According to Gort, his grandson called him excitedly in 2006 to say he had read an article in Rolling Stone magazine that mentioned a guy in Los Angeles who owned the Beatles-autographed wall that Gort so often talked about. The grandson located a telephone number for Geller's agent and before long Gort and Geller met. It turned out they lived only miles apart.

The wall's whereabouts between when the boy owned it and Geller purchased it remains a mystery. It's rumored to have hung in a Baton Rouge bar once and was owned by another Beatles collector. But Geller said he dealt with a middleman and does not know who had it before him.

The 53-year-old Geller said the artifact was prominently displayed in his home in a framed picture box and was his most significant piece of Beatles memorabilia. He said he was selling it because "I'm not sure I'll be here for the 75th" anniversary of the Beatles' U.S. invasion.

More practically, the father of three said he's always used the excuse that he bought it as an investment. "Now I kind of get to prove that it is an investment," said Geller, who has voiced trailers for such movies as "Armaggedon" and "Finding Nemo."

The wall is being sold with a signed letter from Gort and a letter of authenticity from noted Beatles autograph expert Frank Caiazzo.

It will be on display in the window of Heritage Auctions' Park Avenue gallery in time for Beatlefest, an autograph and memorabilia event at the Grand Hyatt New York that runs Friday through Sunday.

The priciest Beatles collectible is John Lennon's hand-painted Rolls Royce Phantom V, which sold at a 1985 auction for $2.23 million. The most expensive Beatles hand-written lyric is for "All You Need is Love," auctioned for $1.25 million in 2005.

The Beatles auction is just one of many events surrounding the Beatles' 50th anniversary. CBS will air a special tribute Sunday night, and a live multimedia event is slated to take place Sunday at 6:30 p.m. ET with several pop culture and music insiders, including Nile Rodgers and Mick Jones. Get more info on that here.