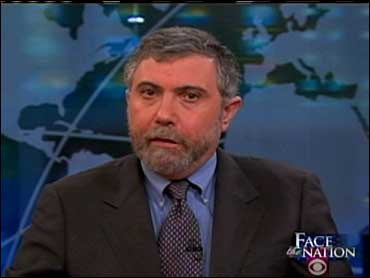 Speaking on CBS News' Face the Nation, Obama senior White House advisor David Axelrod noted that he wants Congress to work with "deliberate speed" on an economic stimulus bill in the new year. "We've talked about a package from 675 billion to 775 billion," Axelrod said, adding "one thing we, I think everyone, agrees on, economists from left to right, is that we have to do something very large." He said a stimulus package by January 20th "would be great" but would not commit to whether that is a realistic goal.

However, Nobel-winning economist Paul Krugman said he is concerned that the stimulus package is not big enough.

"I'd like to see it bigger." Krugman said. "I understand that there's difficulty in actually spending that much money, and I--they're also afraid of the--of the T word. They're afraid of a trillion dollar for the two-year number. But you know, the back of my envelope says it takes roughly 200 billion a year to cut the unemployment rate by 1 percent from what it would otherwise be. In the absence of this program, we could very easily be looking at a 10 percent unemployment rate. So you do the math and you say, you know, even these enormous numbers we're hearing about are probably enough to mitigate but by no means to reverse the slump we're heading into. So this is--you know, I--they're thinking about it straight."

Krugman chimed in on comparisons between the present economic situation and the Great Depression and said, "the only reason that we're not headed for Great Depression II -- at least I don't think we are -- is that we think we learned a few things since then." He then added, "but this is big stuff. This is the worst thing, you know, in two life times."

Gates: NATO expansion "changes the geopolitics of Europe in a dramatic way"

5/22: Face The Nation
Thanks for reading CBS NEWS.
Create your free account or log in
for more features.
View CBS News In
CBS News App Open
Chrome Safari Continue
Be the first to know
Get browser notifications for breaking news, live events, and exclusive reporting.