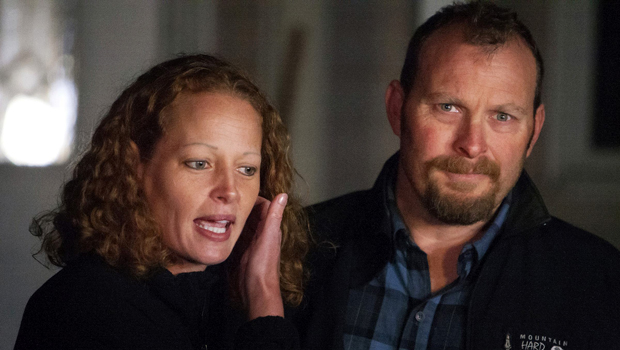 PORTLAND, Maine - The Maine nurse who defied quarantine attempts after treating Ebola patients in West Africa is looking forward to stepping out her front door - "like normal people."

Kaci Hickox's plans for the end of the deadly disease's 21-day incubation period include a dinner out with her boyfriend, but she told The Associated Press she's worried about what type of a reception she'll get after being hailed by some and vilified by others after battling state-ordered quarantines in New Jersey and Maine.

Most people have been supportive, she said, but others have been hateful. She received a letter from one person who said he hoped she would catch Ebola and die.

"We're still thankful we've had a lot of great support in this community but I'd be lying if I said that it didn't make me a little bit nervous thinking about people from the other side of the debate and how they might react to me," she said.

Monday will mark the 21st day since Hickox's last exposure to an Ebola patient, a 10-year-old girl who suffered seizures before dying alone without family.

On Tuesday, Hickox will no longer require daily monitoring for Ebola symptoms, and even those who sought to isolate her agree that she will no longer be a threat.

Hickox she said she doesn't intend to stop speaking out on behalf of public health workers, nor would she let her experience deter her from returning to West Africa.

"Something like quarantine is not going to scare me from doing the work that I love," she said from her home in Fort Kent in northernmost Maine. "I would return to Sierra Leone in a heartbeat."

The Texas native never intended to become the public face of a fierce debate over how U.S. health care workers volunteering in West Africa are treated upon their return.

Volunteering for Doctors Without Borders, she spent a month at a hospital where there were never enough beds for all of the Ebola patients who needed help. It was so hot that volunteers could only spend about an hour at a time treating patients in their protective suits. They were drenched in sweat when they finished their shifts, she said.

On the morning she left Sierra Leone, the weary nurse learned that the girl she'd treated hours earlier had died. She was debriefed by Doctors Without Borders in Brussels before flying to the U.S.

It was after three hours of questioning at the Newark Liberty International Airport that she resolved that she'd have to make a stand on behalf of all returning health care workers.

"I said I'm going to have to do something about this because I can't possibly let my colleagues go through this. This is completely unacceptable," she said.

Hickox was sequestered in a medical tent for days because New Jersey announced new Ebola regulations the day she arrived.

She eventually was allowed to travel to Maine, where the state sought to impose a "voluntary quarantine" before trying and failing to create a buffer between her and others. A state judge rejected attempts to restrict her movements, saying she posed no threat as long as she wasn't demonstrating any symptoms of Ebola.

Hickox said health care professionals like those at the U.S. Centers for Disease Control and Prevention - not politicians like New Jersey Gov. Chris Christie and Maine Gov. Paul LePage - should be in charge of making decisions that are grounded in science, not fear.

"In the past, a quarantine was something that was considered very extreme. I'm concerned about how lightly we're taking this concept today," she said. "I'm concerned that the wrong people are leading the debate and making the decisions."

She said the U.S. needs a public education campaign to better explain the virus that has killed nearly 5,000 in Liberia, Sierra Leone and Guinea.

Hickox said she doesn't intend to step away from the debate over the treatment of health care workers, even after the 21-day mark passes at 11:59 p.m. Monday.

For now, though, she's considering her options as she looks for work. Her boyfriend, Ted Wilbur, contends he was told to stay away from the University of Maine at Fort Kent while she was in the news. He formally withdrew from the school Friday.

Hickox, who holds a nursing degree from the University of Texas at Arlington and master's degrees in nursing and public health from John Hopkins University, said she may opt to go back to school.

"I have been over the last couple of days been toying with the idea of maybe getting a doctorate degree and focusing on quarantine law," she said.