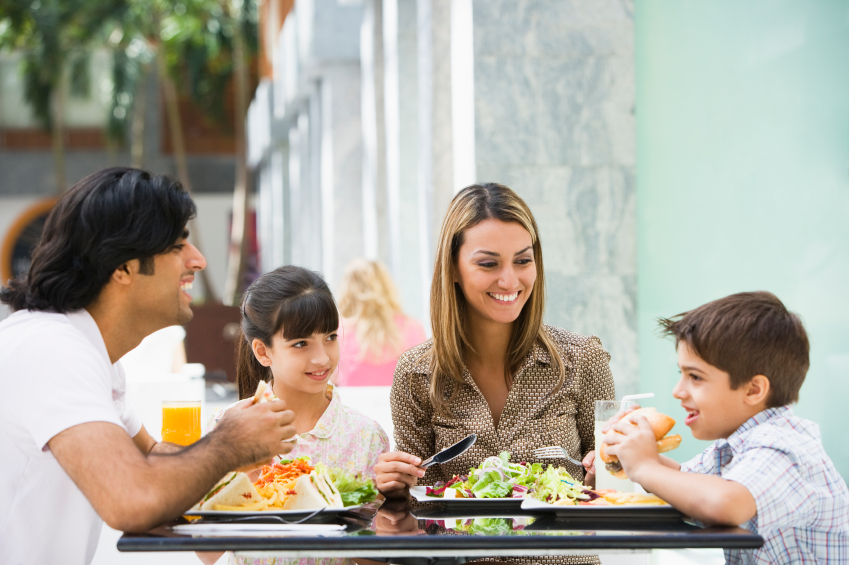 A new study finds that people who eat out consume an average of about 200 calories more a day than when they cook at home.

They also take in more saturated fat, sugar and salt.

The study has limitations. It doesn't say anything about whether frequent restaurant diners are unhealthier than at-home eaters, and it doesn't take into account the potential benefits of eating out, such as socializing and reducing the stress of cooking.

Still, the findings show that "eating out at restaurants should be the exception, not the norm," said study co-author Lisa Powell, a professor of health policy and administration at the University of Illinois at Chicago.

Powell said the researchers wanted to better understand the role of restaurant food in people's diets. "We know that parallel to the rising rates of obesity, Americans have been increasingly eating food away from home, and they now take in, on average, about 600 calories a day from restaurants," she said.

That wouldn't be a problem for people's health if their diets were similar on the road compared to at home. But the study found otherwise.

The researchers based their findings on the responses of over 12,000 people aged 20 to 64 who took part in federal surveys from 2003-2010. The participants answered questions about what they ate over two separate days.

People who ate at fast-food places or full-service restaurants consumed an average of 194 and 205 extra calories per day, respectively. They also consumed more saturated fat (3 and 2.5 grams extra, respectively) and salt (296 and 451 milligrams, respectively).

Where do all the extra calories come from? "More energy-dense foods, larger portions, more empty calories such as sugar-sweetened beverages," Powell said.

Previous research suggests that 36 percent of adults eat food, drinks or both from fast-food restaurants per day, and 27 percent eat at full-service restaurants. With those numbers in mind, Powell estimated that the typical person in the United States consumes an extra 24,000 calories a year by eating out -- the equivalent of 6 to 7 pounds annually.

Susan Roberts, director of the Energy Metabolism Laboratory at Jean Mayer USDA Human Nutrition Research Center on Aging at Tufts University School of Medicine in Boston, said it's possible that the people who ate out at sit-down restaurants actually consumed more than they recalled because it's hard to estimate portion size at those eateries.

"We always underestimate large portions, so people don't realize that restaurant portions are as excessive as they are," she said. "This is why we need menu labeling on all restaurant meals, not just the fast-food and larger chains."

How can people avoid extra calories when they eat out?

"See if you can order a half portion," Powell said. "When there is a choice of sides, opt for veggies and salad rather than fried items. See if you can get the sauce or dressing on the side, and drink water rather than soda."

Roberts suggests assuming that all restaurant meals include two to three times the calories that you need. "That means at the minimum you should eat half or less of a portion in order to not gain weight," she said. "You can ask the server to box up half before it gets to the table. You can also ask for salads with dressing, cheese, croutons on the side, and then just use what you want. Micromanaging your order generally is a great way to go."