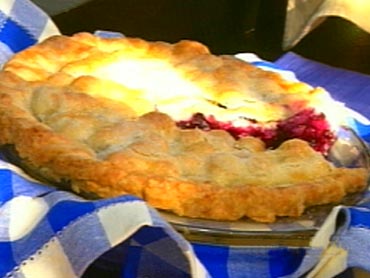 The mystery behind America's favorite foods has been unlocked in the latest book from the folks at Cook's Illustrated magazine. "American Classics" is the compilation of recipes for 300 of America's most favored meals, each tested to perfection.

One summer-time favorite found in the book is blueberry pie, which the magazine's editor and founder Chris Kimball demonstrates on The Early Show. With the right ingredients, mixing technique and rolling method, pie making is a cinch.

Potato Starch Note: Also called potato flour, a gluten-free flour made from cooked, dried and ground potatoes. It's used as a thickener and, because it produces a moist crumb, it is in some baked goods.

Tips:
Pie Crust: After experimenting with different ratios of flour to fat - the most essential parts of the crust - Kimball's team settled on 2 parts all-purpose flour to one part fat (vegetable shortening) as the ideal ratio. With this 2-to-1 combination, his team arrived at a crust that baked up lighter and fluffier than any others. The proportion of salt and sugar, the team says, should be a teaspoon salt to 2 teaspoons sugar ratio. And as for the liquid, ice water worked best for the perfect piecrust.

Dough: The dough can be made either by hand or in a food processor. Using a food processor is faster and does a better job of cutting the fat into the flour. Once fat and flour have been combined, the dough should be transferred to a bowl where the ice water is then mixed in.

Rolling the dough: There are two things to consider:

Rolling Tip: The key is to roll in 1/4 turns and with each 1/4 turn, move the dough so that it doesn't stick to the surface. Once the dough is 6 to 7 inches in diameter, Kimball says, work the dough from the center outward and then work the sides. Remember to avoid rolling over the same area of the dough more than necessary. And keep in mind that the thinner the rolling pin, the better.

There's no slicing, dicing or peeling of fruit involved. It is open-faced with just enough crust turned up over the edge, so rolled crust lying over the lip of a pie plate need not be perfect. Once the crust is turned up, it's given an egg-wash with sugar and goes straight into the oven.

Although fruit pies are filled with an abundance of fruit, Kimball suggests using thickeners to provide a firmer consistency to the filling. The most popular thickeners are flour and cornstarch. However, Kimball found both of these thickeners to be problematic for most of the pies tests (that is all pies, not just blueberry). The cornstarch yielded a dull fruit that was too sweet, and the flour made the fruit mixture too gummy to work with. Kimball found tapioca and potato starch did a much better job in thickening the fruit filling. Both kept appearance intact and did not alter the pie flavor.

Now on to the mixture itself, while blueberries and lemon juice traditionally combine well to provide a zesty flavor, Kimball also suggests adding a little allspice and nutmeg to the flavor mix.

To finish the pie, add the blueberry mixture to the piecrust in the pie plate; then, cover the top with an additional crust. Brush the top crust with egg whites, and sprinkle it with sugar just before putting the pie into the oven. Bake at 425-degrees for 25 minutes, then lover the oven temp to 375 and bake an additional 30 minutes. When done, let the pie rest for at least 4 hours, and then serve.

Kimball is the founder, editor, and publisher of "Cook's Illustrated" magazine. It's a bimonthly publication for cooks interested in understanding the techniques and principles of good home cooking. The goal is to objectively dissect well-known cooking methods and ingredients while trying to develop the simplest, best-tasting and most foolproof techniques for preparing recipes. He is the author of "The Cook's Bible" and "The Yellow Farmhouse Cookbook." He is also a columnist for the New York Daily News and the Boston-based tabloid newspapers. He lives in Boston and Vermont with his wife and their three children.