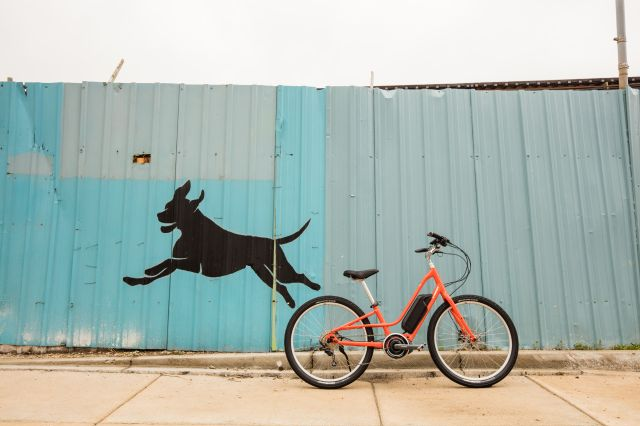 Want to feel like a kid again? Hop on an electric bike.

No one climbs off of an e-bike without feeling happy, enthusiasts say. More and more Americans are trying out this health-conscious and environmentally-friendly way of getting around. As e-bikes catch on in the U.S., the only not-so-childlike aspect of the trend is the price tag.

“’Freedom.’ That’s the word I always hear when people tell me about how they feel riding an e-bike,” said Don DiCostanzo, the co-founder and CEO of Pedego Electric Bikes, in Fountain Valley, California.

DiCostanzo and other e-bike makers, retailers and users told CBS News that e-bikes are not what most people think — they’re not a small motorcycle or electric scooter. Think traditional bicycle frame with a small battery-powered electric motor that’s fueled by pedaling. You jump on and ride like a regular bike, but when you hit a hill or get tired, you can switch on the pedal assist, located on the handlebars, and it gives you a little boost. It turns off when you coast.

Pedego’s e-bikes have five levels of power. “The first level is like a gentle push, like your dad gave you when he taught you how to ride your bike. Four and five are like if someone hooks a tow rope to the front of your bike and then pulls you,” said DiCostanzo.

Various models of e-bikes can reach speeds of up to 20 to 28 miles per hour. At lower speeds, they’re allowed to go wherever bicycles go in most communities.

But they’re not legal everywhere.

New York City banned them in 2004, although CBS New York reports officials have been lax in enforcing the ban, and many of the city’s delivery people make their rounds on illegal e-bikes.

Larry Pizzi, president of Raleigh Electric, a California company that designs, develops and manufactures e-bikes, has worked in the bicycle industry for decades. He told CBS News that e-bikes are drawing attention from all age groups, but particularly from aging baby boomers.

“The baby boom is the biggest demographic that electric bikes appeal to. It keeps people outdoors and active and gives them a little crutch to fall back on when they get tired or come to a hill,” said Pizzi.

“People have varying athletic abilities in their circle of friends, or between husband and wife, or boyfriend and girlfriend. You want to go ride together but there’s this disparity,” said Pizzi, explaining that an e-bike levels the playing field.

He says it’s still a good workout: “It’s not a free ride. You do have to pedal to get support.”

While there haven’t been any health studies on e-bikes, research shows regular bike riding has an array of benefits. It can help with weight loss, reduce stress and improve cardiovascular health. Another recent study showed that in older patients with knee pain and arthritis, riding a bike improved their condition.

Michael Kelley, 73, a mountain biker-turned-e-mountain biker from Berkeley, California, told CBS News, “The e-bike has enabled me to ride long distances with friends I hadn’t been able to ride with for years due to age. The years have moved on and I’ve gotten slower and as I’ve gotten older it’s been harder to keep up.”

But he said the e-bike changed all that and he’s back riding with them. When he first started meeting up with bike pals for trail rides again he said, “They jokingly said, ‘Who the hell are you?’”

Kelley, who started biking when he was 40, now owns two e-bikes. An environmentalist, he often uses one or the other to run brief errands.

“For distances of two or three miles it certainly beats riding around in a car,” he said. He’s outfitted one with a few racks to carry groceries and other purchases.

“I’ll run to the hardware store, to the library a mile away up the hill, to the markets. I love it because I don’t have to worry about parking. I just lock it somewhere,” he said.

But most of all, Kelley said he enjoys taking it out with friends onto mountain bike trails for hours on end.

“It’s a social endeavor, a fitness endeavor and it gives me fantastic, incredible life-altering experiences in nature. I’m continually humbled by the beauty I see,” he said.

While most e-bikes are pedal-assist models, Pizzi said some e-bikes use a throttle that can take over completely if you’re tired, and some companies offer models with a pedal-assist/throttle combination. Some companies also make conversion kits that enable riders to electrify their own bicycle, but he says they’re not engineered as well as an e-bike.

Jim Strang, the owner of five Spokes Etc stores in the Northern Virginia suburbs of Washington, D.C., has been in the bike business for 40 years and says interest in e-bikes has really taken off.

“We have more than doubled our e-bike sales from a 12 month rolling period. The last 12 months they were up over 100 percent,” he said, though he noted they still make up only a small percentage of sales.

“A lot of comments I get from people are ‘why not just get a motorcycle,’ or that it’s cheating. But after somebody rides one it’s like ‘a-ha, now I get it,’” said Strang.

Buyers have a number of different motivations. “There are people who haven’t ridden a bike for a while and want to get one for health issues, for exercise. There are both elderly folks and younger commuters,” he said.

Newer models have gotten lighter, making them easier to load onto a rack on a car or lug up the stairs.

“Four years ago they were 50-plus pounds; now they’re in range of the high 30s to low 40s,” Strang said. He believes they’ll become even lighter as the technology evolves.

E-bikes are pretty low maintenance day-to-day, only requiring air in the tires and keeping the battery charged. Most use lithium batteries and take anywhere from three-and-a-half to four hours to charge, say users. You can plug them into a regular wall socket at the office if you ride to work.

Strang sells a variety of brands but is partial to Japanese e-bike manufacturer Shimano as well as Bosch, a German company. Other big-name bike companies are making them, too, including Trek, Specialized, Giant and Bianchi.

Pizzi said e-bikes are already very popular in Europe. And in China, more than 200 million are in use, according to Bloomberg BusinessWeek.

A report out earlier this year by Navigant Research projected that global e-bike sales are expected to grow from about $15.7 billion in 2016 to $24.4 billion by 2025.

Larry Pizzi can see why. “You can’t go out for a ride on one of these things without coming back with a huge smile on your face. I’ve never seen anyone ride it and not come back and say it was incredibly fun. People are glowing,” he said.