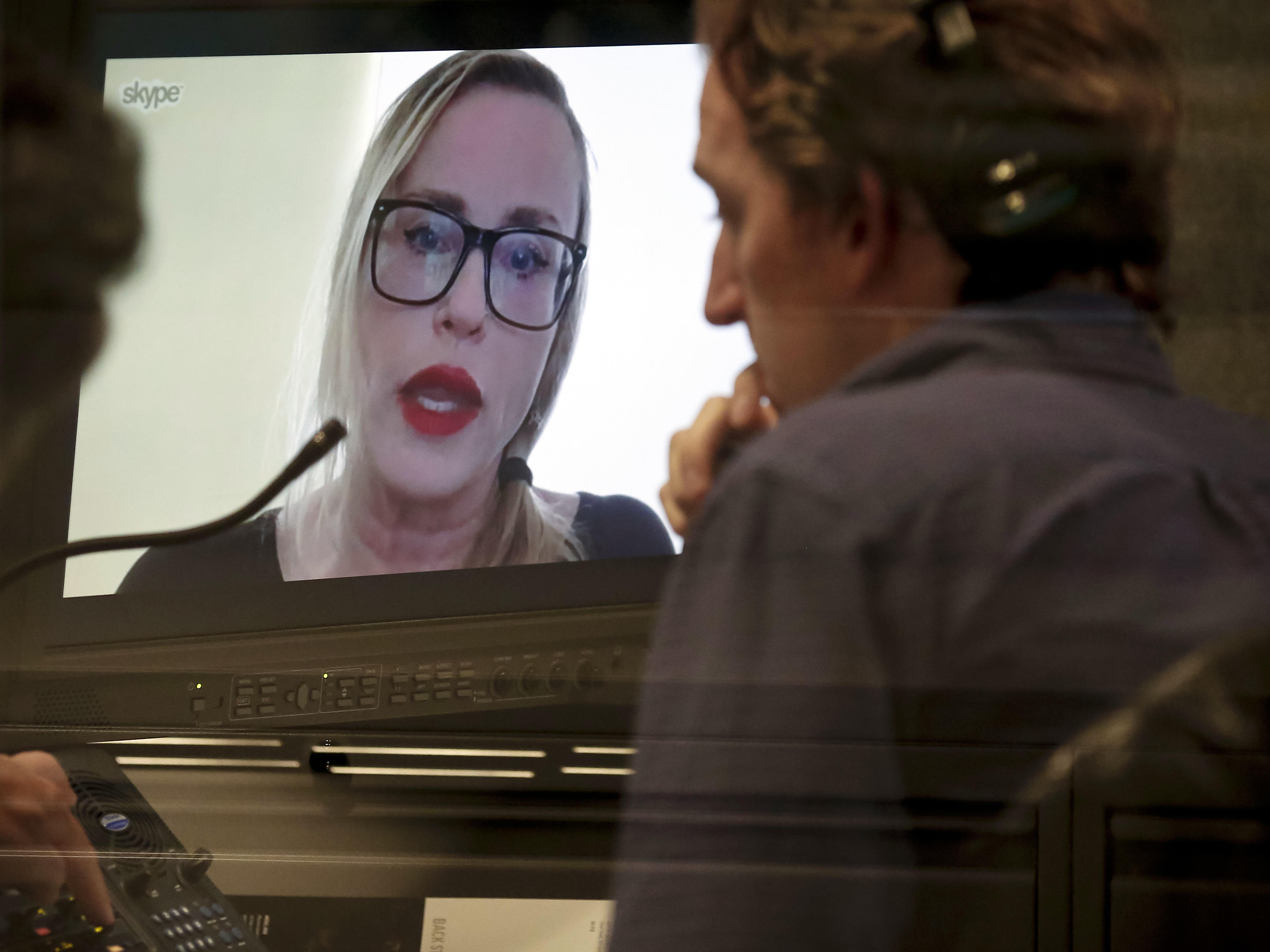 NEW YORK -- The top editor for the National Enquirer, Us Weekly and other major gossip publications openly described his sexual partners in the newsroom, discussed female employees' sex lives and forced women to watch or listen to pornographic material, former employees told The Associated Press. That editor, Dylan Howard, is now the chief content officer of American Media Inc.

Howard quit soon after the report was completed, but the company rehired him one year later with a promotion that landed him in the company's main office in New York. It was not clear whether Howard faced any discipline over the accusations. AP is not aware of any sexual harassment allegations involving Howard since he was rehired.

The AP spoke with 12 former employees who knew about the investigation into Howard's behavior, though not all were aware of every detail. The outside investigator hired to examine complaints about Howard's behavior also confirmed to AP that he completed a report.

In a brief phone interview with the AP, Howard characterized the ex-employees' claims as "baseless."

A lawyer for American Media confirmed Tuesday that an outside investigator was hired to look into two employees' claims about Howard's behavior.

The lawyer, Cam Stracher, said the investigation did not show serious wrongdoing. Stracher confirmed that one employee had complained that Howard said he wanted to create a Facebook account for her vagina, but Stracher said Howard said that never happened.

"It was determined that there was some what you would call as horsing around outside the office, going to bars and things that are not uncommon in the media business," Stracher said, "but none of it rose to the level of harassment that would require termination."

American Media publishes the National Enquirer, RadarOnline, Star and other gossip publications and websites. In March the company purchased the glossy Us Weekly magazine for a reported $100 million, significantly boosting its readership among women.

In his job, Howard oversees those newsrooms.

"The investigation described an environment where employees mixed socially outside the office - sometimes at bars - but found no direct support for the allegations of harassment made by the two complainants," Hammond said in an email.

Most of the former employees spoke to the AP on condition of anonymity because they had signed nondisclosure agreements, sometimes as part of severance packages.

Two former employees, one a senior manager and another a reporter in the L.A. office, agreed to be publicly identified to discuss Howard's behavior.

"The behavior that Dylan displayed and the way he was and the way the company dealt with it - I just think that it has to be made public because it's completely unacceptable," said Maxine "Max" Page, a former senior editor at RadarOnline. She complained to the human resources department about Howard's behavior on behalf of two female reporters.

Howard made inappropriate comments to and about one of those women, Page and six other ex-employees said. Howard told employees in the newsroom he wanted to create a Facebook account on behalf of the woman's vagina, commented on her sex life and forced her and other female employees to either watch or listen to graphic recordings of sex involving celebrities despite there being no professional rationale for doing so, they said.

A former senior editor recalled Howard wrongly claimed during a newsroom meeting that the woman had had sex with a journalism source and praised her for it, saying she needed to "do what you need" to get a story.

The editor said: "He encouraged her to have sex with people for information."

The woman Howard was discussing confirmed these and other incidents to the AP but declined to be identified.

Page and four other employees recounted instances in which Howard talked about his own sexual exploits, including descriptions of his partners' physical attributes.

Stracher, the company lawyer, said no one interviewed by the outside investigator complained about Howard's handling of pornographic material. Stracher said there was nothing inherently inappropriate about that in the celebrity news business.

Stracher also said no one complained to the investigator about Howard's alleged encouragement of a reporter to sleep with news sources.

Another former reporter, Liz Crokin, said she was also harassed by Howard, including once when he asked whether she was "going to be walking the streets tonight" on a day she wore heels to work.

Page and Crokin, like many of the other former employees who spoke to AP, were laid off by the company during waves of downsizing at AMI. The others who left the company said they did so by choice.

Many of the former employees who described Howard's behavior said they decided to do so after the New Yorker and other news organizations published emails in recent weeks showing that Howard had worked with movie producer Harvey Weinstein to undermine allegations of sexual misconduct by Weinstein.

The emails showed that Howard had dispatched a reporter to uncover derogatory information about an actress who had accused Weinstein of rape, and then shared that information with Weinstein. Howard has said he pursued the information as part of due diligence before entering into a business relationship with Weinstein. Weinstein, who has denied allegations of non-consensual sex, has maintained he was passing along a news tip to Howard that was never published.

After the 2012 investigation into Howard's conduct in Los Angeles, two of the ex-employees said they were told by a manager that Howard was barred from the Los Angeles office. The employees said he worked from home after that. Stracher, the company lawyer, said Howard was given no such order to stay away from the office.

Shortly after the report was issued, Howard took a new job with another company.

It's unclear what the report concluded or whether Howard faced any disciplinary action.

The AP was unable to obtain a copy of the report. Its author, Philip Deming, confirmed he wrote a report but said he could not talk about what he found or the recommendations he made.

Page, the manager whose complaint prompted the company to hire Deming, said she was skeptical the company properly investigated Howard's behavior.

Deming said he produced a 25- to 35-page report with 18 exhibits, and interviewed between 15 and 20 employees. He declined to describe his findings without AMI's authorization. Stracher, the company lawyer, declined to release the report.

Deming said he was not aware that American Media re-hired Howard a year after his report.

Stracher said Howard was "cautioned when he returned that what I would characterize as horsing around was not appropriate."

Crokin, the former reporter, said she believed Howard retaliated against her after Deming interviewed her, taking away serious work and assigning her menial tasks. She was laid off a short time later.

The company lawyer, Stracher, said any employees who witnessed or had concerns about Howard's behavior should have raised them at that time.

Another ex-employee who was interviewed by Deming recalled being anxious about speaking with the HR consultant.

"I told the investigator I didn't know anything," said the former employee, acknowledging that answer was not true. "It's almost like I had Stockholm syndrome."

Yet another former employee, who said she was present when Howard showed a handful of reporters pornography that was not newsworthy, said Deming never interviewed her.

Howard, 35, came to the U.S. in 2009, months after being fired from a sports reporting job in Australian television news, following a police investigation about how he had obtained athletes' medical records. Police did not bring charges against him. He was then hired by Australian broadcaster Craig Hutchison's CrocMedia to report in the United States.

In a recent podcast, Hutchison praised Howard's talent but said he quickly parted with Howard under rocky circumstances.

"His methods make me uncomfortable, that's probably the best way to put it," Hutchison said.

During his time there, Howard blurred the lines between his role as a manager and his personal life, throwing parties in Las Vegas and in Malibu, inviting female reporters to accompany him in the evenings and regularly discussing his late-night partying in the newsroom, six former employees said.

For his 30th birthday party, Howard invited a dozen employees to Las Vegas in January 2012 for an all-expenses-paid, three-day party he dubbed "Dildo's Dirty 30," according to a copy of the professionally designed invitation obtained by the AP.