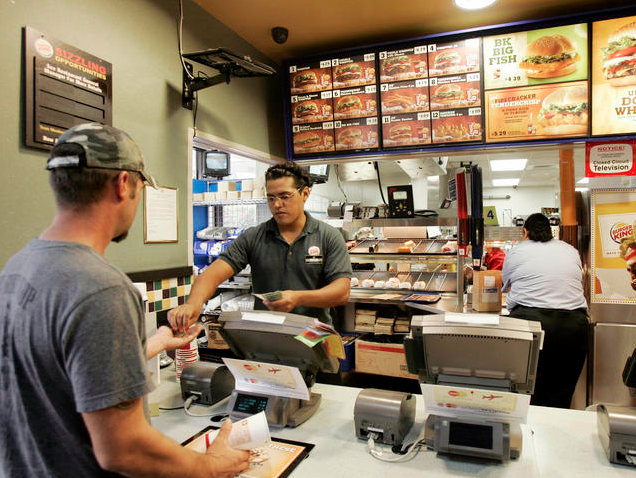 (MoneyWatch) Reflecting its eroding economic fortunes, the American middle-class is often described as having been "hollowed out." New employment data suggest that isn't just a figure of speech.

Although 60 percent of the jobs lost following the 2008 financial crisis were in mid-wage occupations such as construction, manufacturing and office management, relatively few of those positions have come back, according to the National Employment Law Project. Instead, most of the jobs created during the U.S. economy's fitful recovery -- 58 percent -- have been in low-wage professions including retail sales, food preparation, home health and customer service, the New York-based advocacy group said Friday in a report.

Middle-class share of America's income shrinks
Where the jobs are: Soldiering and the fry station
U.S. poverty on track to rise to highest level since 1960s

"The recovery continues to be skewed toward low-wage jobs, reinforcing the rise in inequality and America's deficit of good jobs," said study author Annette Bernhardt, policy co-director at NELP, in a statement. "While there's understandably a lot of focus on getting employment back to pre-recession levels, the quality of jobs is rapidly emerging as a second front in the struggling recovery."

Not all industries have shed jobs: Manufacturers of durable goods, along with transportation and warehouse companies, have shown solid job growth during the recovery. Health care also continues to be a source of strength for the economy.

"Without these industries, the recovery would have been even more unbalanced and skewed toward lower-wage occupations," NELP said in its report, which is based on data from the federal Current Population Survey, a monthly poll of about 50,000 households in the U.S. that draws from a range of demographic and labor force information.

The growing scarcity of jobs traditionally available to middle-class Americans long predates the most recent economic downturn. Since 2001, employment in mid-wage jobs has fallen 7.3 percent, while rising in both lower- and higher-paying occupation, NELP found.

Those findings track with other data highlighting the mounting economic pressure on the middle class. In a study released last week, the Pew Research Center said that since 2001, incomes for households with annual earnings ranging from $39,000 to $118,000 had gone backward for the first time since 1945. The research organization characterized the period from 2001 through 2010 as the "worst decade in modern history" for the middle class.

Income for the average middle-class family also has stagnated for decades, with the financial crisis precipitating a sharp decline. Median household income -- meaning that half of the population earn more and half earn less -- grew at modest 1.6 percent between 2001 and 2007, then fell more than 4 percent from 2007 to 2009, according to the Economic Policy Institute, a Washington think-tank. Median household income has fallen $3,700 over the past decade, from $53,164 in 2000 to $49,445 in 2010.

Classified by income, roughly half of U.S. adults qualify as middle class, down from 61 percent in 1971, Pew found. Other estimates find even greater shrinkage. Labor economist Alan Krueger, head of the White House's Council of Economic Advisers, said in a study earlier this year that just over 42 percent of Americans now qualify as middle class, defined as households earning between 50 percent and 150 percent of the national median income, down from more than half who were in this group in 1970.