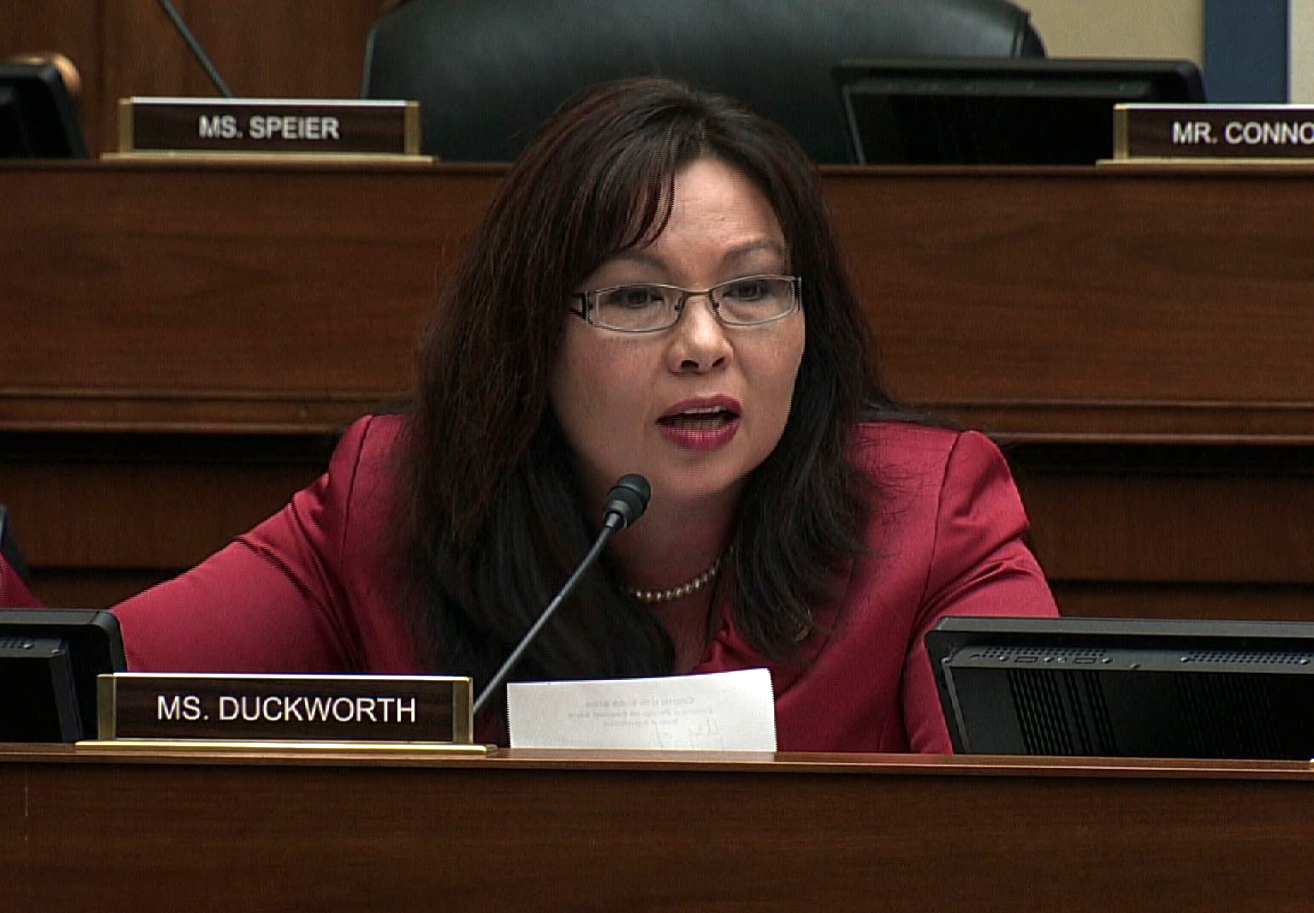 Iraq war veteran and double amputee Rep. Tammy Duckworth, D-Ill., angrily heaped scorn Wednesday onto an IRS contractor who used a military prep school injury from 27 years ago to qualify for disabled veteran status, accusing him of misrepresenting his injury to game the VA system and obtain preferential treatment for his company's bidding on IRS contracts.

The contractor, Braulio Castillo, is the president and CEO of Strong Castle Inc., which has recently drawn scrutiny over hundreds of millions of dollars worth of questionable IRS contracts it has received. Investigators with the House Oversight and Government Reform Committee have said that Castilllo claimed the injury and intentionally located the company in a government-designated "hubzone" to make his company's bids for IRS contracts more competitive.

Castillo, who is from Northern Virginia, could not seem to recall how he injured his ankle in the first place - by playing football or orienteering. He also claimed it had been broken, but the Oversight Committee said x-rays taken at the time did not reflect a fracture. The VA did award him disability status and currently sends him a monthly check.

Under intense questioning from Duckworth, Castillo said he did not believe he misrepresented his injury to the Veterans Affairs department, but Duckworth wasn't buying it.

"My feet hurt, too," she said after Castillo described the pain in his left foot. "In fact the balls of my feet burn continuously and I feel like there is a nail being hammered into my right heel right now. So I can understand pain and suffering and how severed connection can actually cause long term, unremitting, unyielding, unstoppable pain. So I'm sorry that twisting your ankle in high school has now come back to hurt you in such a painful way, if also opportune for you to gain this status for your business as you were trying to compete for contracts."

Castillo was given a disability rating of 30 percent by the VA, which he defended as a justifiable assessment, but Duckworth again slammed him for misrepresenting the extent of his injury. "You know, my right arm was essentially blown off and reattached. I spent a year in limb salvage with over a dozen surgeries over that time period, and in fact, we thought that we would lose my arm, and I'm still in danger of possibly losing my arm. I can't feel it, I can't feel my three fingers."

"My disability rating is 20 percent," she said.

After reading from a letter Castillo sent to a government official in which he described the "crosses that I bear in my service to our great country," Duckworth, visibly angry, shamed Castillo for comparing his football injury with the heroism of veterans.

"I'm so glad that you would be willing to play football in prep school again to protect this great country," she said. "Shame on you, Mr. Castillo, shame on you. You may not have broken any laws...but you certainly broke the trust of this great nation. You broke the trust of veterans. Iraq and Afghanistan veterans right now are waiting an average of 237 days for an initial disability rating. It is because people like you who are gaming the system are adding to that backlog that young men and women who are suffering from post-traumatic stress, who are missing limbs cannot get the compensation and the help that they need."

"You, who never picked up a weapon in defense of this great nation, very cynically took advantage of the system," she continued. "You broke the faith with this nation, you broke the faith with the men and women who lie in hospitals right now ....and if this nation stops funding veterans' health care and stops and calls into question why veterans deserve their benefits, it's because cases like you have poisoned the public's opinion on these programs."

Also at Wednesday's hearing, Gregory Roseman, the deputy director of Enterprise Networks and Tier Systmes Support at the IRS, invoked his Fifth Amendment protection against self-incrimination and declined to testify before the committee. Roseman, a friend of Castillo's, is accused of improperly helping to steer contracts to his friend's company.

Roseman's invocation of the Fifth Amendment marks the second time in recent weeks that an IRS official has declined to testify before Congress by invoking their constitutional rights. In May, Lois Lerner, the IRS official at the center of a probe into the tax agency's targeting of conservative groups applying for tax exempt status, also invoked her Fifth Amendment right. Some controversy remains over whether she waived that right by making a statement professing her innocence before clamming up, and members of the House Oversight Committee will vote this week on whether to bring Lerner back before the committee to answer questions.