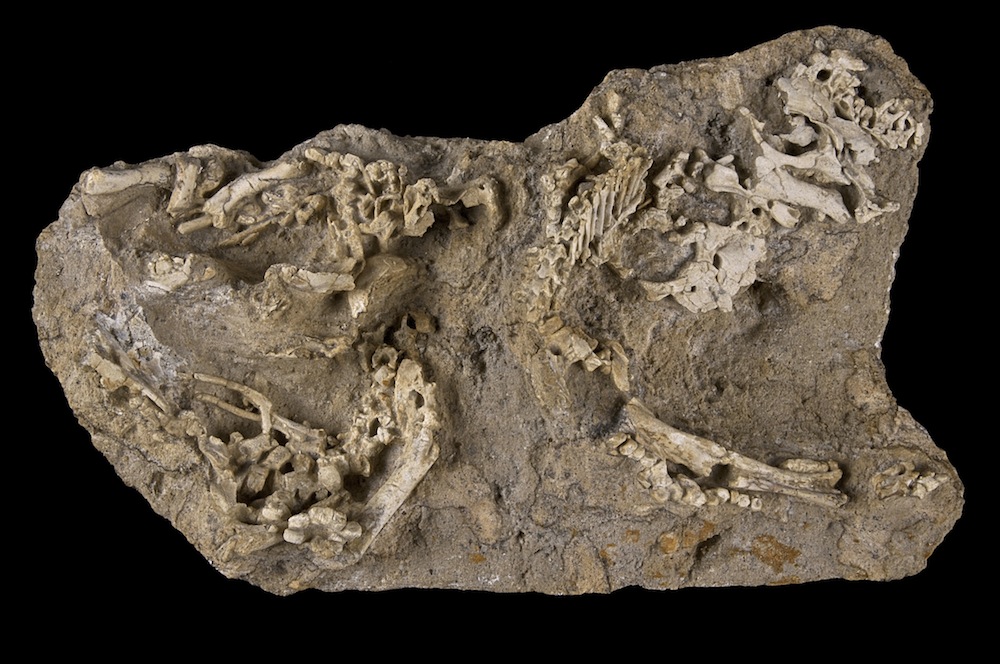 A cluster of baby duck-billed dinosaurs -- hadrosaurs like the adorable character Ducky in the 1988 animated film "The Land Before Time" -- was uncovered in a slab of rock from a fossil-rich part of Mongolia known as "Dragon's Tomb."

Scientists examining a roughly 1-foot-long (0.3 meters) piece of rock from the Dragon's Tomb site, which is located in the Gobi Desert, discovered at least three new baby Saurolophus angustirostris fossils. The rock was part of a dinosaur nest and contained some interesting bones, but until now, scientists didn't know exactly what those bones were. The new discovery, akin to finding a whole new chapter in a family photo album, could help researchers piece together the entire Saurolophus family tree.

Saurolophus were large duck-billed hadrosaurs with distinctive crests on the top of their heads. But the newly identified fossils weren't very large at all, the scientists said. In fact, the newfound hadrosaurs were probably at the very earliest stages of life -- either they had just hatched, or were just about to. [In Images: Discovering a Duck-Billed Dinosaur Baby]

The Dragon's Tomb hadrosaurs are the youngest Saurolophus angustirostris ever described, the researchers said. These babies could help paleontologists better understand the changes that occurred to the animals' bodies as they grew from 1-foot-long babies into 40-foot long (12 m) adults.

One of the most drastic such changes can be understood by looking at the babies' snouts. "While hadrosaurids are considered the so-called duck-billed dinosaurs, we saw a very small snout [compared to adults]," said study lead author Leonard Dewaele, a researcher at Ghent University in Belgium. "This had been anticipated by other scientists."

The babies didn't seem to have developed the adult's signature crests yet, either.

​Sunday is the longest day of the year, but why?

By studying these kinds of changes, scientists can piece together not only how each species lived, but also how many different species are related to each other, the researchers said.

To identify the skeletons, the scientists compared the babies to other known specimens of Saurolophus. These types of hadrosaurs are common around the Dragon's Tomb region, so there was plenty of reference material.

But this new discovery came with some unique challenges, because the fossils had originally been poached from the site and sold to a private collector. The rock slab, in other words, had not been scientifically collected.

"The problem is then we don't have all the data about the exact location [the fossils] came from," Dewaele told Live Science.

A lot of a fossil's scientific value comes from the context in which it was found -- what layer of rock, for example, or what side of a hill -- and most poachers don't bother to record that important information, he said. "So, we couldn't say a lot about [where the animals] died," Dewaele added. While some information had been recorded, much of the bigger picture had been lost, the researchers said.

The dinosaur nest was likely originally on a riverbank that was washed away and covered in sand, the researchers said. Though the area is now desert, 65 million years ago, the Dragon's Tomb would have been located in a flood plain with large, winding rivers. The river could have easily swept away the nest and begun the fossilization process, although evidence suggests at least some of the babies had already died by the time they were buried, the researchers said

Though the fossils were originally poached and sold internationally, the baby dinos have now been returned to Mongolian authorities and are currently housed in the Institute of Paleontology and Geology at the Mongolian Academy of Sciences in Ulaanbaatar.

The findings were published Wednesday in the journal PLOS ONE.