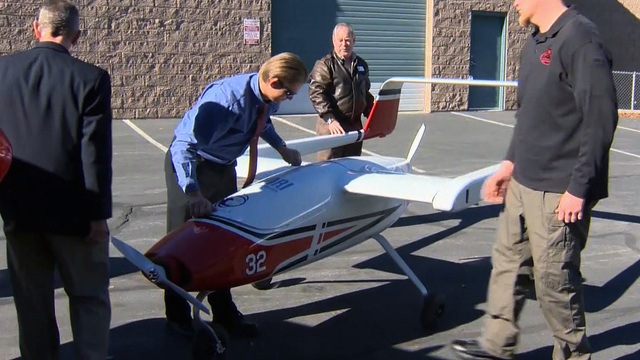 Tilley's current cloud seed generator shoots tiny silver iodide particles into storm clouds to help transform water vapor into snow or rain. The conversion takes about an hour.
Over the Sierra Nevada, he said, the cloud seed generator is more successful at higher altitudes.
Eventually there's a limit to how high a land-based instrument can reach -- and that's where drones come in. Tilley's team at Nevada's Desert Research Institute is developing a first-of-its-kind unmanned drone for cloud seeding.
Piloted planes have also been used in cloud seeding for more than 60 years. They can produce an additional 1 billion gallons of water for every 25 to 45 hours of flying, but have to stay above the clouds for safety reasons.
Tilley says drones can fly through clouds and stay in the air longer, producing even more precipitation for communities devastated by drought.
"You can think of it not only do I have more water to shower with, or water my plants with, or raise crops with, you're really helping the economy from having the breaks put on it because of the amount of water that's available."
The Desert Research Institute is still working on a cost analysis for using drones, but estimates that the price tag to operate them might only be half as much as standard planes, especially because the smaller drones require much less fuel.
He hopes his cloud seeding drone will begin soaking drought-stricken communities by the end of this year.