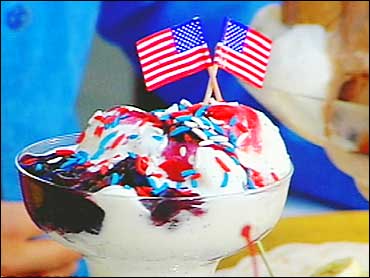 (CBS/AP) VAN BUREN, Ark. - Ah, summertime...when a driver accused of leaving the scene of an accident can tell police she didn't stop because she didn't want her ice cream to melt.

Police in Van Buren, in western Arkansas, say when one vehicle rear-ended another on Arkansas Highway 59 on Sunday evening, the woman driving the pickup that caused the damage didn't wait to check on the vehicle she hit. So the driver of the struck vehicle called police, and also took off in pursuit.

CBS affiliate KFSM reports that when the police tracked down the offending driver, Flora Burkhart, she told them she didn't think there was enough damage done to merit stopping - and besides, she said, she just didn't want her ice cream to melt.

Hey, who wants a mess in the car?

Burkhart was given no credit for creativity, but was cited for following too closely and leaving the scene of an accident.