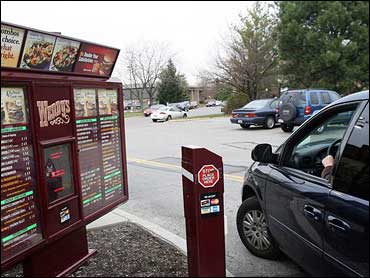 When Pam Farber, the daughter of Wendy's founder Dave Thomas, worked at one of her father's fast-food stores in the 1970s, customers were unfamiliar with the drive-through concept.

Farber said she often had to run outside with a pen and pad to talk to customers who were baffled by the bullhorn speaker or whose loud mufflers muffled cashiers' voices.

Unfamiliarity is no longer a problem for consumers hungry for convenience, and drive-thrus now represent a large portion of the chains' sales — 70 percent at Burger King Corp. alone.

Fast-food chains are trying new ways to stand out in an industry ultimately limited by how fast a human being can hand food out the drive-thru window. Companies are trimming bulky text from menus, using computer programs that guess upcoming orders and routing order-taking duties to call centers.

Speed remains a benchmark of success. But the average service time hasn't budged past about three minutes for five years. So many chains have also made changes to avoid mistakes in orders and make ordering easier.

Wendy's is replacing some of the text on menus with more pictures and placing awnings over menu boards to shield customers from rain and snow.

Technology firms such as TechKnow Inc. are stepping in with digital menus, used at many major chains, that can increase sales by suggesting "missing" side items or desserts to customers who order only entrees. And outsourcing is expanding at McDonald's Corp., where some stores are using central call centers rather than cashiers in the restaurant to take orders from drive-thru customers.

Smaller chains, such as Checkers Drive-In Restaurants Inc., have started testing confirmation screens, which display orders back to customers so they can make corrections before pulling up to the window. That technology has helped boost accuracy by more than 11 percentage points in four years at fast-food leader McDonald's.

Burger King is working to break the speed barrier with its own technology that helps cooks ensure that precooked food remains fresh by keeping track of how long it's been since it was prepared.

Without such developments, speed will continue to stagnate, said Brian Baker, president of marketing research firm Insula Research, whose clients include Burger King.

"I think we've pretty much gotten as fast as we're getting" with the current technology, said Baker, who wrote part of the 2005 drive-thru study for trade publication QSR Magazine. The magazine spot-tests major chains annually to measure drive-thru speed and accuracy.

To help cut the waste from leftovers, Pittsburgh-based Hyperactive Technologies developed a computer system that tells cooks how much food they need by counting vehicles in the drive-thru line and factoring in demand for current promotions and popular staple items.

The technology is used at two major national chains, Porfeli said, declining to give their names.

Burger King has started using similar technology, said Jim Hyatt, chief global operations officer of the Miami-based chain, of 11,220 restaurants. The technology monitors the status of precooked food and determines what orders the kitchen should expect, he said.

Wendy's, with 9,800 restaurants and $3.2 billion in annual sales, has led the QSR studies for speediest service nearly every year since they started in 1997. But Checkers trimmed that lead to just three-tenths of a second last year with debit and credit payment systems and touch-screen computers for order-takers.

The Tampa, Fla., company, aims to get more orders right as it tests confirmation systems in some Florida restaurants, Chief Executive Keith Sirois said. The effort includes slimming down the menu to simplify order preparation, he said.

Cutting menus is a tried and true way to improve speed as well, said Carl Sibilski, an analyst with Morningstar Inc.

Companies that are rolling out new menu items have had a more difficult time beating the clock, he said. Those chains have had to adopt more experimental tactics to boost speed, but those are more likely to backfire, Sibilski said.

McDonald's, with more than 31,000 restaurants worldwide and $20.2 billion in sales, did not return calls. But Sibilski, who follows the chain, said McDonald's is expanding its use of call centers for taking drive-thru orders, to ensure accuracy.

The outsourcing started in the Pacific Northwest and is now taking root in states such as Minnesota, Sibilski said. The system also is helpful in areas where the chain's employees may have limited English skills, he said.

"They haven't gotten faster, but you can understand them now," she said as she shopped for groceries in Columbus.

Pomante held her hand in front of her mouth and imitated the garbled speakers she grew up with.

"You don't get that anymore," she said.

With the streamlined science that drive-thru service has become, customer attitudes have changed, said Wendy's franchise owner Roger Webb, who started his career with the company at the chain's first drive-thru in Columbus.

"To order something from a box 20 feet away from the building," he said, "that was kind of unheard of then."
By Sarah Anderson