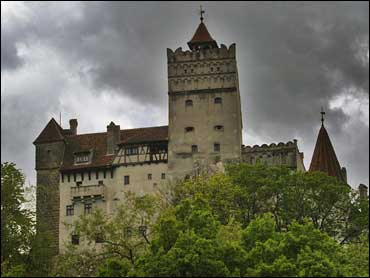 The Habsburg family said Wednesday that it wanted to sell a Transylvanian castle famous for its connections to the 15th century medieval ruler who inspired "Dracula" for $78 million to the local authorities, an attorney said.

The local council says it is interested in buying Bran Castle, but a government minister criticized the price tag, calling it too expensive.

Dominic Habsburg, the owner, insisted the family had honorable intentions.

"We are trying to find the best way to preserve the castle in the interest of the family and the people of Bran," Habsburg said in a statement made available exclusively to The Associated Press.

The castle was returned to Habsburg, a New York architect, on May 26, decades after it was confiscated by the communists from Habsburg's mother, Princess Ileana, in 1948, the year the royals were forced to leave the country.

After the restitution, concerns were raised that the family could sell castle to a hotel chain and that the site could end up being the centerpiece of a Dracula theme park that would blight the surrounding, pristine countryside.

The castle, perched high on a rock and surrounded by snowcapped mountains in southern Transylvania, is one of Romania's top tourist attractions and is visited by 400,000 people each year.

Faced with the enormous expense of the castle's upkeep, Habsburg said he wanted to place the property in the hands of the local council with an eye toward ensuring its historic character is preserved.

"The family has the country and the people in their heart. We are grateful for the restitution as a moral act to amend injustice," the statement from Habsburg said.

But he added, "The way of life cannot be returned and the restitution has come with financial sacrifice. ... We would like Castle Bran to remain a symbol of everything that is honorable and good in Romania."

The community of Bran, where the fortress was built in the 14th century to help stave off invasion, gave it to Ileana's mother, Queen Marie, in 1920 to thank her for her efforts in unifying the country. It was briefly associated with Prince "Vlad the Impaler," whose cruelty inspired novelist Bram Stoker's creation, the vampire Count Dracula. History says he spent one night there.

In 1938, Ileana inherited the castle, which is located some 105 miles north of Bucharest.

In recent years, the castle — complete with occasional glimpses of bats floating around its ramparts in the twilight — has attracted movie makers as a backdrop for films about Dracula and other spooky themes.

Lia Trandafir, an attorney for Habsburg, said the local authorities are interested in buying it. "They'd like to see it coming back to the community and they consider it a central pillar of tourism in Brasov county," she said.

Aristotel Cancescu, head of the local city council is due to travel to Vienna, Austria, on Monday to open discussions about a bank loan. If he manages to secure a loan, it will need to be approved by local councilors.

Culture Minister Adrian Iorgulescu has criticized the planned purchase of the castle, saying it is too expensive. "I have nothing against the castle being bought by the city council if they are stupid enough to pay this money," he said. He added he believed the castle was worth a fourth of Habsburg's asking price.