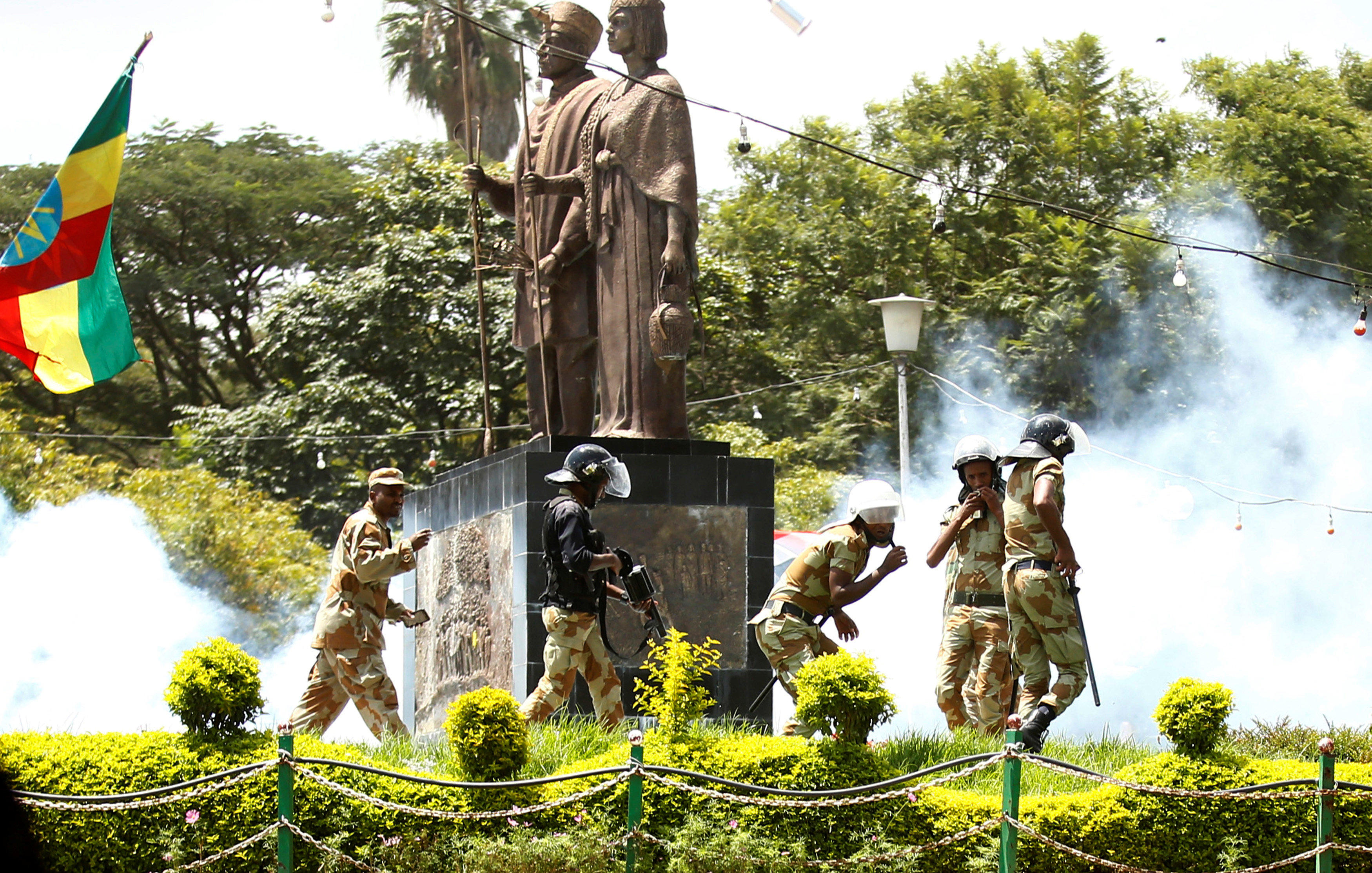 BISHOFTU, Ethiopia - Dozens of people were crushed to death Sunday in a stampede after police fired tear gas and rubber bullets to disperse an anti-government protest that grew out of a massive religious festival, witnesses said. A body count at hospitals showed at least 52 dead, regional government officials said late Sunday.

“I almost died in that place today,” said one shaken protester who gave his name only as Elias. Mud-covered and shoeless, he said he had been dragged out of a deep ditch that many people fell into as they tried to flee.

The first to fall in had suffocated, he said. “Many people have managed to get out alive, but I’m sure many more others were down there,” he said. “It is really shocking.”

The stampede occurred in one of the East African country’s most politically sensitive regions, Oromia, which has seen months of sometimes deadly demonstrations demanding wider freedoms.

An estimated 2 million people were attending the annual Irrecha thanksgiving festival in the town of Bishoftu, southeast of the capital, Addis Ababa, when people began chanting slogans against the government, according to witnesses.

The chanting crowds pressed toward a stage where religious leaders were speaking, the witnesses said, and some threw rocks and plastic bottles.

Police responded with tear gas and rubber bullets, and people tried to flee. Some were crushed in nearby ditches, witnesses said.

Ethiopia’s government acknowledged that deaths had occurred, but it did not say how many were killed and injured. Through a spokesman, it blamed “people that prepared to cause trouble.”

Many people were taken to hospitals, the spokesman’s office said.

Mulatu Gemechu with the opposition Oromo Federalist Congress told the AP that his sources at hospitals said at least 52 people were dead as of Sunday evening, and he thought the figure would rise.

The protesters were peaceful and carry anything to harm police, Gemechu said.

Before the stampede, an Associated Press reporter saw small groups of people walking in the crowd and holding up their crossed wrists in a popular gesture of protest.

The crossed-wrists gesture has been used widely as a sign of peaceful resistance and is meant to symbolize being handcuffed by security forces.

It was in the spotlight at the Rio Olympics, when Ethiopian marathoner Feyisa Lilesa, who is from the Oromia region, crossed his wrists while finishing in second place. He has not returned to the country since, saying his life could be in danger.

Ethiopia’s government, a close security ally of the West, has been accused often of silencing dissent, at times blocking internet access.

The months of anti-government protests and the sometimes harsh government response have raised international concern.

The United States recently spoke out against what it called the excessive use of force against protesters, describing the situation in Ethiopia as “extremely serious.”

On Sunday, many people in Ethiopia turned their Twitter and Facebook profiles to solid black and expressed anger at the government over the deaths.

The Ethiopian government has long been accused of human rights abuses when it comes to government opponents. Three Ethiopian journalists were released from prison just ahead of President Obama’s visit to the African nation last year. They are just some of victims who dared to criticize their government and went to prison for it.