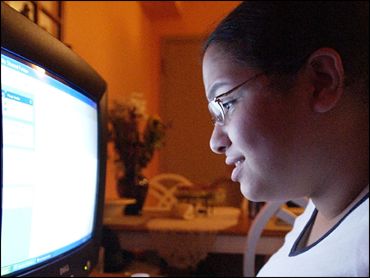 A 12-year-old girl in New York who was among the first to be sued by the record industry for sharing music over the Internet is off the hook after her mother agreed Tuesday to pay $2,000 to settle the lawsuit, apologizing and admitting that her daughter's actions violated U.S. copyright laws.

The hurried settlement involving Brianna LaHara, an honors student, was the first announced one day after the Recording Industry Association of America filed 261 such lawsuits across the country. Lawyers for the RIAA said Brianna's mother, Sylvia Torres, contacted them early Tuesday to negotiate.

"We understand now that file-sharing the music was illegal," Torres said in a statement distributed by the recording industry. "You can be sure Brianna won't be doing it anymore."

Brianna added: "I am sorry for what I have done. I love music and don't want to hurt the artists I love."

The case against Brianna was a potential minefield for the music industry from a public relations standpoint. The family lives in a city housing project on New York's Upper West Side, and they said they mistakenly believed they were entitled to download music over the Internet because they had paid $29.99 for software that gives them access to online file-sharing services.

The RIAA said this week it already had negotiated $3,000 settlements with fewer than 10 Internet users who learned they might be sued after the RIAA sent copyright subpoenas to their Internet providers. But lawyers negotiated those settlements before the latest round of lawsuits, and the RIAA had said any further settlements would cost defendants more than $3,000.

Even in the hours before the settlement was announced, Brianna was emerging as an example of what critics said was overzealous enforcement by the powerful music industry.

The top lawyer for Verizon Communications Inc., William Barr, charged earlier Tuesday during a Senate hearing that music lawyers had resorted to a "campaign against 12-year-old girls" rather than trying to help consumers turn to legal sources for songs online. Verizon's Internet subsidiary is engaged in a protracted legal fight against the RIAA over copyright subpoenas sent Verizon customers.

"Are you headed to junior high schools to round up the usual suspects?" Durbin asked RIAA President Cary Sherman during a Senate Judiciary hearing.

Durbin said he appreciated the piracy threat to the recording industry, but added, "I think you have a tough public relations campaign to go after the offenders without appearing heavy-handed in the process."

Sherman responded that most people don't shoplift because they fear they'll be arrested.

"We're trying to let people know they may get caught, therefore they should not engage in this behavior," Sherman said. "Yes, there are going to be some kids caught in this, but you'd be surprised at how many adults are engaged in this activity."

It was unclear how Brianna's name — rather than her mother's — came to be listed as a defendant in this case. The recording industry said it named as the defendant in each lawsuit the person who paid for the household Internet account, but children typically aren't listed as account holders.

The RIAA said it did not investigate each individual's background before filing its lawsuits.

"It's a perfectly legal, legitimate way for music companies to try to protect their copyrights, and it is likely to have a chilling effect on those computer users who illegally download a lot of music," says Cohen.

An estimated 60 million Americans participate in file-sharing networks, using software that makes it simple for computer users to locate and retrieve for free virtually any song by any artist within moments.

"Nobody likes playing the heavy," said RIAA President Cary Sherman, who compared illegal music downloads to shoplifting. "There comes a time when you have to stand up and take appropriate action."

"The industry did its homework, identified certain people it believes are illegally downloading music, and is going after those people in the hopes that thousands of other people who also may be doing this may think twice," says Cohen.