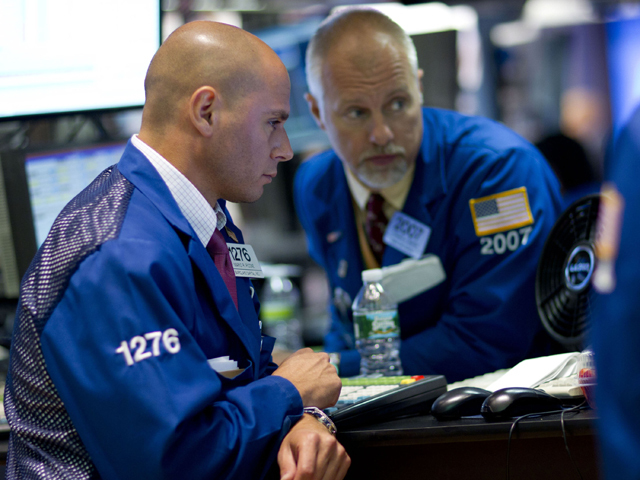 NEW YORK - Fears about the global economy led to the biggest panic in financial markets since the 2008 financial crisis.

The Dow plunged nearly 513 points Thursday, its biggest point decline since falling 677 on Dec. 1, 2008 in the midst of the financial crisis. The last time the market recorded a larger percentage drop was in early 2009.

Only three of the 500 stocks in the Standard & Poor's 500 index had gains. Oil fell by 6 percent. The yield on the two-year Treasury note hit a record low as investors sought out relatively stable investments.

All three major stock indexes are down 10 percent or more from their previous highs, a drop-off that is considered to be a market correction. A drop of 20 percent or more signifies the start of a bear market, an extended period of stock declines.

The Dow Jones industrial average was down 512.76 points, or 4.3 percent, to 11,383.68. Thursday's losses turned the blue-chip stock index negative for the year.

Investors are increasingly concerned about the possibility of another recession in the U.S. and a debt crisis in Europe.

"We are continuing to be bombarded by worries about the global economy," said Bill Stone, chief investment strategist at PNC Financial.

The Vix, a measure of investor fear, shot up 36 percent. It is up 92.6 percent for the quarter, which began July 1.

Oil dipped to $87 a barrel on worries demand will fall because of the slowing economy. It had traded over $100 as recently as June 9.

Nearly 20 stocks fell for every one that rose on the New York Stock Exchange.

European stocks also fell broadly because of concerns that Italy or Spain may need help from the European Union. The benchmark stock indexes in Italy, Germany and England each fell 3 percent.

Stock trading has been volatile this week because of concerns that the U.S. economy is weakening. Manufacturing, consumer spending and hiring by private companies are below levels that are consistent with a healthy economy. Those reports have called into question estimates from economists, including Federal Reserve Chairman Ben Bernanke, that the economy will grow more quickly in the second half of the year.

Mark Luschini, chief investment strategist for Janney Montgomery Scott, an investment firm in Philadelphia, said some clients are moving to cash "as a parking lot to sort things out."

"With the scars of 2008 still fresh, some clients don't want to miss the chance to pre-empt further damage should it come," Luschini said.

Large investors have moved so much money into cash accounts at Bank of New York that on Thursday the bank said it would begin charging some clients a 0.13 percent fee to hold their cash.

"In the past month, we have seen a growing level of deposits on our balance sheet from clients seeking a safe-haven in light of the global interest rate and credit environment," the bank said in a statement to The Associated Press. Bank of New York clients include pension funds and large investment houses.

"Investors are deciding that now is the time to take risk off the table," said Brian Gendreau, market strategist for Cetera Financial Group. Gendreau said that some investors are now wondering whether stocks will have a prolonged slump similar to the aftermath of the Great Depression.

Technical trading, a term used to signify buying or selling based on the S&P 500's prior highs and lows, also helped push stocks downward. The S&P 500 fell below 1,222, a so-called support level, early in the day. That signified to some traders that the stock market would continue to slide.

"Traders are respecting the technical levels even if they're not technicians," said Quincy Krosby, market strategist at Prudential Financial. "Even if you're what we call a conviction buyer, you have to respect those levels."

Companies that outperform when the global economy expands fell the most. Alcoa fell the most, with a 9 percent drop. Bank of America and Caterpillar were down 7 percent. Boeing ended down 6 percent.

Some traders are selling ahead of Friday's employment report, which is expected to show that unemployment remained at 9.2 percent last month. A rise in the unemployment number would likely push stocks lower again.

The U.S. government said before the market opened that the number of people who applied for unemployment benefits for the first time was only slightly lower last week to 400,000. That's still above the 375,000 level that economist say indicates a healthy job market. It was the latest indication of weakness in the U.S. economy.

All 10 industry groups in the S&P index fell. Energy, materials and industrial companies each lost 5 percent or more.

The sell-off comes at a time when corporate profits are growing. The forward price to earnings ratio of the S&P 500 has fallen to about 12, well below its long-term average of 16. That means that investors who buy now are paying less for each dollar in profits.

Based on what an investor now pays for corporate profits, stocks are now trading at their lowest levels in 20 years, said Tim Courtney, chief investment officer of Burns Advisory Group in Oklahoma City.

Few companies were spared in the sell-off. Just 3 of the 500 stocks in the S&P 500 moved higher. General Motors Co. fell 4 percent despite beating analyst's earnings estimates.