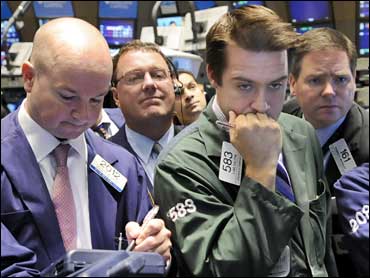 Wall Street has had yet another dismal day Tuesday, extending its heavy losses as investors' worries about the financial sector wiped out early enthusiasm over the Federal Reserve's efforts to inject confidence into the credit markets. Trading remained fractious and grew more turbulent in the last hour, with the Dow Jones industrial average losing more than 500 points and all the major indexes falling more than 5 percent.

This latest plunge, which followed a big drop on Monday, came after Bank of America Corp. reported its third-quarter profits fell 68 percent.

The forecast for the nation's economy keeps getting gloomier. And the weatherman bearing the bad news Tuesday was Federal Reserve Chairman Ben Bernanke.

"The outlook for economic growth has worsened and the downside risks to growth have increased," Bernanke said in an address this afternoon.

So the Fed will try to use a blowtorch to thaw the frozen credit markets by making short term loans directly to big businesses, reports CBS News business correspondent Anthony Mason.

The move is "Extremely unusual," says Wall Street historian Charles Geisst. "It's never been done before. And it's also getting close to a desperate move."

The "commercial paper market," as it's called, is critical to large companies that need quick cash to buy supplies or meet payroll. The businesses offer what essentially are short-term IOUs that pay interest. They're usually financed by money market funds or major investors.

Credit card companies, for example, use them to pay merchants, while waiting for your monthly payment. But as the credit system has seized up, even blue chip companies like Caterpillar and General Electric have been forced to pay much higher interest rates for short-term loans they need. That's why the Fed has made this historic move.

Already in August, consumer borrowing fell for the first time in more than a decade. News of the Fed's latest move initially rallied the markets. But that optimism soon evaporated.

"We are kind of in a post traumatic stress order phase - one loud noise and we are all jumping a little bit," says Bernard McSherry of Cuttone & Company.

Even Bernanke's hint of another rate cut couldn't lift Wall Street's spirits. As one trader put it: "We want the Fed to fire the gun. We're just afraid they're gonna run out of bullets."

Despite Bernanke's attempt to console the stock market, investors remain worried about financial companies like Bank of America Corp., which after the closing bell Monday slashed its dividend and reported that its third-quarter profit fell 68 percent. The stock fell $4.68, or 15 percent, to $27.54 and was the steepest decliner among the 30 stocks that comprise the Dow Jones industrial average.

Investors are fearful that financial companies will continue to face cash shortages even with efforts in Washington and by other governments to resuscitate lending.

Investors are still hoping to see other moves from the Fed to boost confidence. Australia's central bank lowered interest rates by the largest amount since 1992 in a surprise move, and that reignited hopes that others, including the Fed and European Central Bank, might follow suit.

Though not giving the market a rate cut, the Fed has taken other steps to help unclog the credit markets. On Tuesday, policymakers provided more details about when it will make $900 billion in short-term loans available to squeezed banks.

The loans are made available to banks through auctions. The Fed, in coordination with other countries' central banks engaged in similar efforts, laid out dates that it will conduct the auctions through the rest of this year.

Concerns about the credit markets still fed demand for the relative safety of government debt, though pressures eased. Demand for short-term Treasurys remains high because of their safety; investors are willing to take extremely low returns just to have their money in a secure place.

Some investors moved into longer-term Treasury bonds, which while still safe don't draw as much demand as shorter-term debt in times of fear. The yield on the 10-year note fell to 3.52 percent from 3.50 percent late Monday.

Oil prices rebounded after plunging Monday to an eight-month low on concerns a global recession will undermine demand for crude. Light, sweet crude rose $2.36 to $90.17 a barrel on the New York Mercantile Exchange.

Editor's Note: This story was updated on Oct. 8, 2008, to report that Caterpillar and General Electric are facing higher interest rates for short-term loans. High credit-rated CAT and GE are getting loans (selling bonds) -- just at higher premiums than they would like and many analysts expect.
.