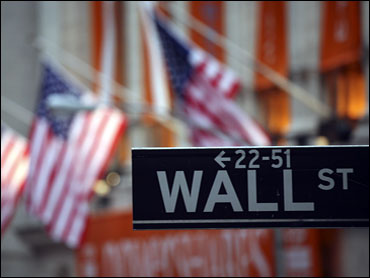 Stocks started December with a jump. The Dow Jones industrial average rose 249 points Wednesday, its biggest one-day gain since Sept. 1 and the sixth largest this year.

Signs that the U.S. job market thawed in November jump-started the gains. ADP Employer Services, a payroll company, said small businesses added the largest amount of workers in three years last month, well ahead of what analysts had forecast.

"The U.S. economy is all about jobs and anything that leads folks to believe that there's a better job market will be good for equities," said Paul Zemsky, the head of asset allocation at ING Investment Management.

More encouraging news followed throughout the day. The Institute of Supply Management said its index of manufacturing activity rose in November for the 16th month. The Federal Reserve then said the U.S. economy improved in 10 of the Fed's 12 regions. Only the Philadelphia and St. Louis regions reported mixed economic conditions.

It was the largest point gain since Sept. 1, when stocks began rallying on expectations the Federal Reserve would move to lift economic growth. The Dow continued climbing until it hit this year's high on Nov. 5, two days after the Fed put the $600 billion stimulus plan in motion. Since then, stocks have fallen amid worries about Europe's debt troubles and sluggish U.S. economic growth.

Even with Wednesday's gains, the Dow is still 1.6 percent below its Nov. 5 close. The index is up 7.9 percent so far this year.

All 10 industry groups that make up the S&P 500 index were higher, led by energy, industrial and technology companies. And all 30 stocks in the Dow index rose, led by Home Depot Inc., whose shares rose 4.6 percent. United Technologies rose 4 percent and Alcoa Inc. 3.4 percent.

Rising stocks outpaced falling ones by four to one on the New York Stock Exchange. Consolidiated volume was 4.4 billion shares.

Bond prices fell sharply, pushing their yields higher. The yield on the 10-year Treasury bond rose to 2.97 percent from 2.80 percent late Tuesday. That yield is a widely used benchmark for loans including mortgages.

European stocks got a boost after European Central Bank President Jean-Claude Trichet suggested that the bank could buy bonds issued by countries within the European Union. That, along with a better-than-expected bond auction by Portugal, pushed the euro higher. The Euro Stoxx 50, which tracks blue chip companies in Europe, rose 2 percent.

Stocks rose in Asia on signals that the Chinese economy is growing. A Chinese state index of manufacturing activity indicated that the country's economy expanded for the 21st straight month. A competing Chinese survey by HSBC rose to an eight-month high.