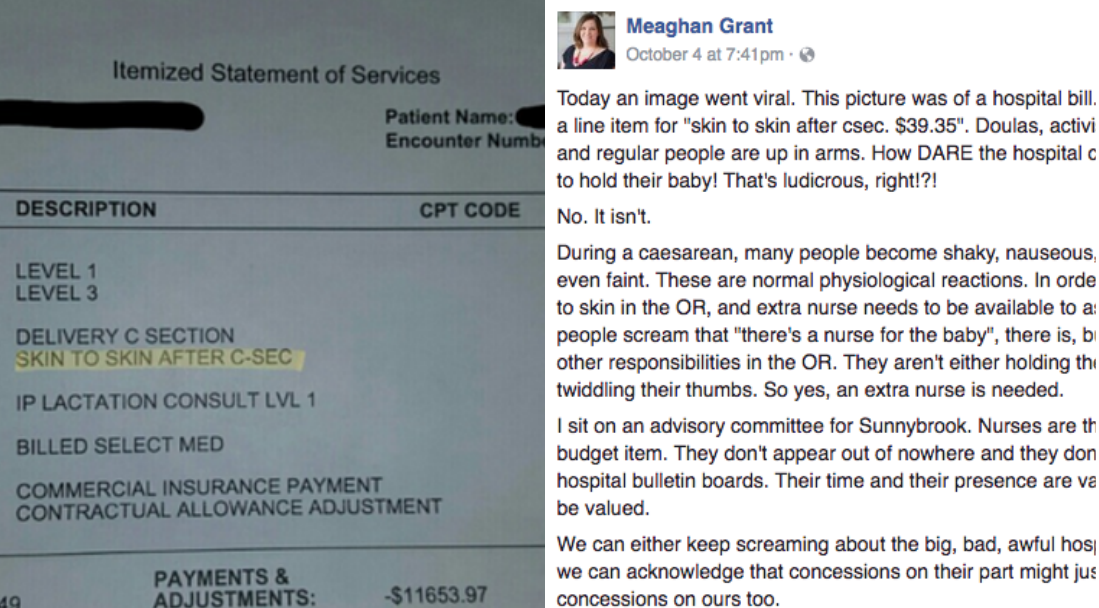 Last week, the internet was shocked to learn that a Utah couple had to pay $39 to hold their newborn baby immediately after the child was born via cesarean section.

New father Ryan Grassley created a tongue-in-cheek GoFundMe page so others could share in the laugh he and his wife got when they received the hospital bill listing an extra charge for “skin to skin” contact — a practice that involves placing the newborn’s bare skin against its mother’s to help them bond.

But there was at least one person who wasn’t chuckling at the charge.

Meaghan Grant, who works at Toronto Family Doulas, spoke out on the matter in a passionate Facebook post that has since been shared by hundreds of people. Doulas are trained to assist mothers through pregnancy, childbirth and postpartum care.

“During a caesarean, many people become shaky, nauseous, uncomfortable, even faint,” Grant explained. “These are normal physiological reactions. In order to facilitate skin to skin in the OR, an extra nurse needs to be available to assist.”

Several others chimed in, some saying the doula’s post was a “mic drop.”

“Thank you for your insight on this. It sheds an entirely different light on the story,” one Facebook user commented.

“I’m impressed with how low the number is,” another said. “As a mother who has had two cesareans, one with skin to skin and one without, I can tell you just how priceless it truly is.”

After a photo of the Utah couple’s bill went viral — with more than 6 million views on Imgur.com — Grassley stressed that he wasn’t posting about it to slam the hospital.

“We had a very positive experience during the birth of our son, and the hospital and staff were great throughout the entire process,” he said after the birth of his son at Utah Valley Hospital on Sept. 4.

The hospital explained in a statement that the $39 charge is due to the need for an extra nurse. “In the case of a C-section, where the bedside caregiver is occupied caring for the mother during surgery, an additional nurse is brought into the OR to allow the infant to remain in the OR suite with the mother. This is to ensure both patients remain safe. There is an additional charge associated with bringing an extra caregiver into the OR. The charge is not for holding the baby, but for the additional caregiver needed to maintain the highest levels of patient safety,” a spokesperson told CBS Salt Lake City affiliate KUTV.

The doula explained why “skin to skin” is different in the OR compared to a vaginal birth.

“In the OR, the birthing person is lying flat, on a very narrow surgical table. Their arms are out to the sides for IV access and a blood pressure cuff,” she said. “There are electrodes on their upper body and a drape protecting a sterile field. The person might be groggy, nauseous, or in pain. They don’t have the same kind of stability or leverage. That makes it harder to hold the baby.”

Every hospital is different and may have different policies, but Grant says safety is the number one concern. Extra support may be needed even if a dad is in the room.

“That father wouldn’t be the first to become faint, ill, or even lose consciousness during a cesarean. It happens! The nurse is there to keep everyone safe,” she says.

In the end, Grant agrees with Grassley that it’s a “positive experience” parents enjoy — no matter the cost.

“This new practice of facilitating skin to skin in the OR is a step towards providing a more normal beginning to families,” Grant said. “Those moments of bonding are so precious.”

Biden says pandemic is "over" in U.S.
Thanks for reading CBS NEWS.
Create your free account or log in
for more features.
View CBS News In
CBS News App Open
Chrome Safari Continue
Be the first to know
Get browser notifications for breaking news, live events, and exclusive reporting.