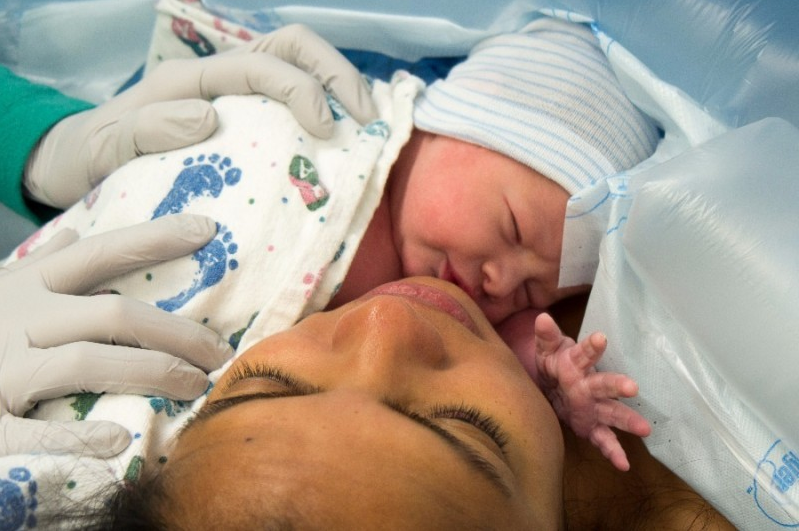 Ryan Grassley had to pay nearly $40 to hold his baby immediately after the child was born via cesarean section.

The Utah father wanted to share the laugh he and his wife got out of seeing the itemized bill with a $39.35 charge for “skin to skin” time, CBS Salt Lake City affiliate KUTV reports. The practice, viewed to have many benefits, is when a new baby’s bare skin is placed against its mother’s to help them bond.

Grassley said when his son was born at Utah Valley Hospital on Sept. 4, the operating room nurse asked if the couple wanted to do “skin to skin.” The baby was cleaned up after the C-section for his moment with Mommy.

“The nurse let me hold the baby on my wife’s neck/chest,” Grassley posted on Reddit, under the username halfthrottle. “Even borrowed my camera to take a few pictures for us. Everyone involved in the process was great, and we had a positive experience. We just got a chuckle out of seeing that on the bill.”

“I posted the bill to Reddit because I thought it was funny,” Grassley wrote online.

Apparently, millions of people agreed with him. The post has been viewed more than 4 million times on Imgur.com, and upvoted more than 6,200 times on Reddit.

Grassley created a tongue-in-cheek GoFundMe page with a fundraising goal of $39.35 to pay off the “ridiculous” fee. He writes that any excess money donated will be put toward a vasectomy because, “I never want to go through these sleepless new baby nights again.”

He also said it has been interesting to see the shock from people around the world about the cost of medical procedures in the U.S.

Grassley wanted to be clear that he wasn’t posting the picture of the bill as a slight toward the hospital.

“We had a very positive experience during the birth of our son, and the hospital and staff were great throughout the entire process,” he wrote.

Janet Frank, a spokeswoman for Intermountain HealthCare’s Utah Valley Hospital, was unable to comment on the Grassleys’ situation due to patient privacy laws, but she did offer a statement explaining the rationale behind the charge:

“In general, Utah Valley Hospital is an advocate for skin-to-skin contact between a mother and newborn directly after birth. Skin-to-skin is a best practice with proven benefits for both mom and baby. We do everything possible to allow skin-to-skin after both vaginal and C-section births. In the case of a C-section, where the bedside caregiver is occupied caring for the mother during surgery, an additional nurse is brought into the OR to allow the infant to remain in the OR suite with the mother. This is to ensure both patients remain safe. There is an additional charge associated with bringing an extra caregiver into the OR. The charge is not for holding the baby, but for the additional caregiver needed to maintain the highest levels of patient safety.”