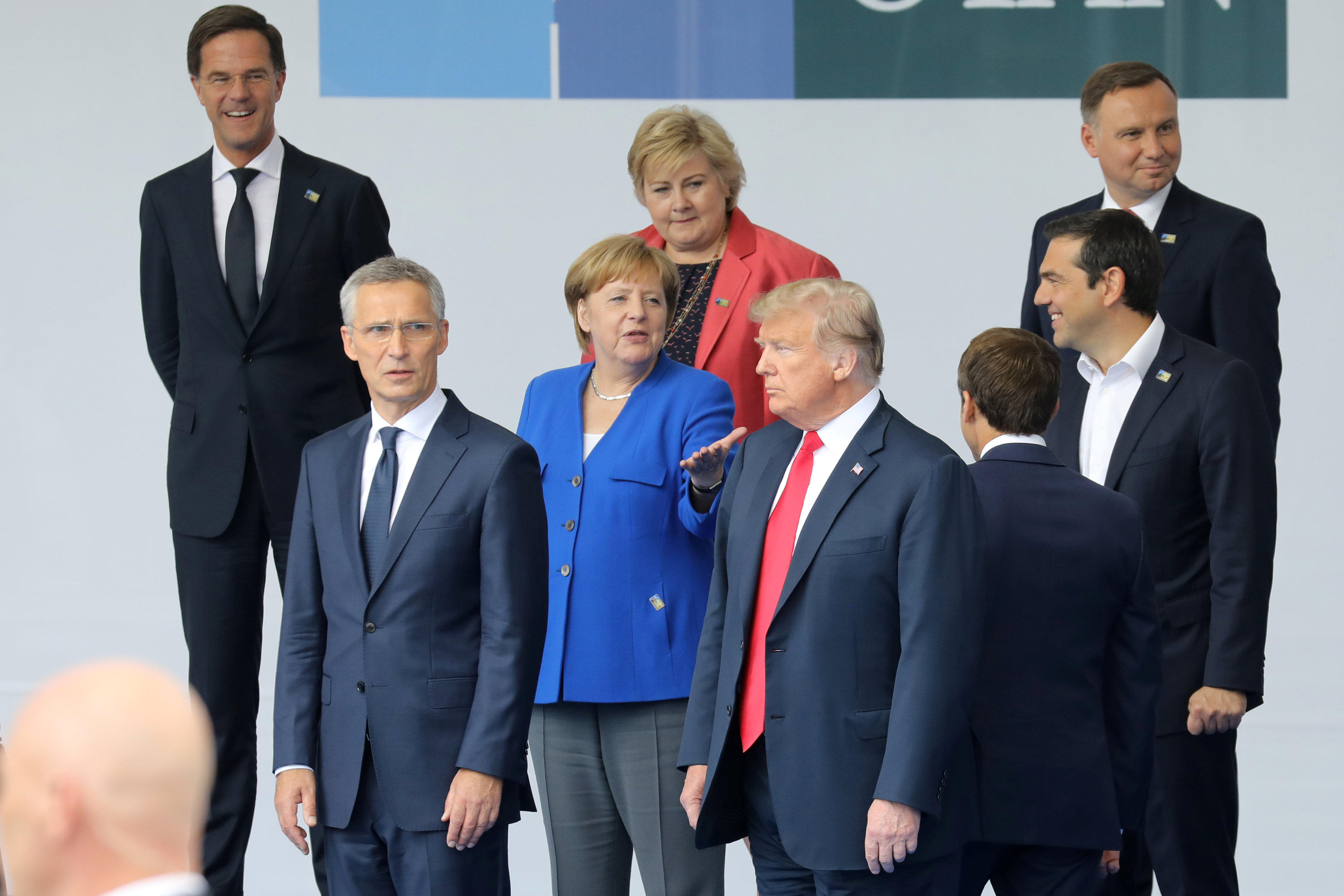 BRUSSELS -- President Trump and German Chancellor Angela Merkel have met after the U.S. leader publicly lambasted the longtime ally over its spending on national defense and a Russian oil pipeline. Sitting down in Brussels, where both were attending a NATO summit, Mr. Trump described it as a "great meeting."

He said they discussed defense investment and trade, adding: "We have a tremendous relationship with Germany."

Merkel said she raised issues of migration and economic development with her U.S. counterpart.

Their meeting came hours after Mr. Trump claimed a pipeline project has made Germany "totally controlled" by and "captive to Russia" during a combative breakfast that kicked off what was already expected to be a fraught NATO summit. Mr. Trump, in a testy exchange with NATO Secretary General Jens Stoltenberg, took issue with the U.S. protecting Germany when the European nation is making deals with Russia.

The president appeared to be referring to the Nord Stream 2 pipeline that would bring gas from Russia to Germany's northeastern Baltic coast, bypassing Eastern European nations like Poland and Ukraine and doubling the amount of gas Russia can send directly to Germany. The vast undersea pipeline is opposed by the U.S. and some other EU members, who warn it could give Moscow greater leverage over Western Europe.

Asked after the meeting whether he has discussed his earlier remarks about the pipeline with Merkel, Mr. Trump said it had come up but he didn't elaborate.

Mr. Trump, in a message to Germany, asked why the U.S. should "protect you against Russia" when the two countries are making deals.

"You tell me, is that appropriate?" he asked, adding that: "Germany is totally controlled by Russia."

He later said that, "Germany as far as I'm concerned, is captive to Russia" and urged NATO to look into the issue.

Merkel first responded to Mr. Trump's remarks as she arrived for the summit, telling reporters: "I have experienced myself how a part of Germany was controlled by the Soviet Union. I am very happy that today we are united in freedom, the Federal Republic of Germany. Because of that we can say that we can make our independent policies and make independent decisions. That is very good, especially for people in eastern Germany."

Stoltenberg pushed back over breakfast, too, stressing that NATO members have been able to work together despite their differences.

CBS News White House correspondent Weija Jang says President Trump set the tone for the summit at his breakfast meeting with Stoltenberg; typically leaders hash out conflicts in private, but the tense exchange unfolded with cameras rolling. It left no question as to how hard the president intends to press America's NATO allies over money.

Asked about the tone of Mr. Trump's remarks, one European diplomat in Brussels for the summit noted the U.S. leader's proven history of speaking his mind, telling CBS News' Kylie Atwood that, "for Trump there is really no public, private separation -- he says what he thinks, when he thinks it."

The diplomat noted that gas from other sources, including the U.S., is more expensive than Russian gas, so there is little economic inventive to buy American gas. For Germans, specifically, Russia is a much closer and cheaper source for the vital resource. They said European diplomats have tried to explain that economic reality to Mr. Trump, "but Trump does not listen. No one has been able to change his mind here."

Mr. Trump is expected to continue hammering jittery NATO allies about their military spending during the summit, which comes amid increasingly frayed relations between the "America first" president and the United States' closest traditional allies.

Mr. Trump said as he arrived at the breakfast that the situation is "not fair to the taxpayers of the United States but we will make it fair."

"They will spend more," he later predicted. "I have great confidence they'll be spending more."

Mr. Trump has been pushing NATO members to reach their agreed-to target of spending 2 percent of their gross domestic products on national defense by 2024 and has accused those who don't of freeloading off the U.S.

"Many countries in NATO, which we are expected to defend, are not only short of their current commitment of 2% (which is low), but are also delinquent for many years in payments that have not been made," he tweeted Tuesday while en route to Europe, asking: "Will they reimburse the U.S.?"

That's not how the spending works. The 2 percent represents the amount each country aims to spend on its own defense, not a direct payment to NATO or the U.S.

As CBS News White House correspondent Major Garrett reports, so far this year, only five of the 29 NATO member countries, including the U.S., have spent 2 percent of their gross domestic product on defense. NATO estimates that 15 members, or just over half, will meet the benchmark by 2024 based on current trends.

Arriving in Brussels, Merkel also defended Germany's contributions to NATO coffers, arguing that her nation "does a lot for" the alliance. "Germany is the second largest provider of troops, the largest part of our military capacity is offered to NATO and until today we have a strong engagement towards Afghanistan. In that we also defend the interests of the United States."

During his campaign, Mr. Trump called NATO "obsolete" and suggested the U.S. might not come to the defense of members if they found themselves under attack -- a shift that would represent a fundamental realignment of the modern world order. He also called Brussels a "hell hole" and "a mess." Mr. Trump has moderated his language somewhat since taking office, but has continued to dwell on the issue, even as many NATO members have agreed to up their spending.

Stoltenberg, for his part, has credited Mr. Trump for spurring NATO nations to spend more on defense, noting that the Europeans and Canada are projected to spend around $266 billion more by 2024. He said Wednesday that last year's increases marked the largest in a generation.

Arriving for his meeting with Stoltenberg, Mr. Trump told the NATO chief that "because of me they've raised about $40 billion over the last year. So I think the secretary general likes Trump. He may be the only one, but that's OK with me."

Mr. Trump was also participating in a welcome ceremony, a meeting of the North Atlantic Council and a working dinner with some of the same leaders he berated over trade during his last world leaders summit in Canada last month.

Brussels is the first stop of a week-long European tour that will include stops in London and Scotland, as well as a highly anticipated meet with Russia's Vladimir Putin.

Mr. Trump predicted as he departed Washington that the "easiest" leg of his journey would be his scheduled sit-down Putin -- a comment that did little to reassure allies fretting over his potential embrace of a Russian leader U.S. intelligence officials accuse of meddling in the 2016 elections to help Mr. Trump win.

Despite Russia's aggressive moves in Ukraine and confirmed election meddling in the U.S., the president wouldn't say before he left on Tuesday whether Putin was friend or foe.

In between the NATO and Putin summits, the president will stop in London. He appeared to take a jab at Prime Minister Theresa May by praising her recently resigned Foreign Secretary Boris Johnson.

"Boris Johnson's a friend of mine. He's been very, very nice to me. Very supportive and I maybe will speak to him when I get over there," the president said.

On the eve of the NATO summit, European Council President Donald Tusk pushed back against Mr. Trump's constant criticism of European allies and urged him to remember who his friends are when he meets with Putin in Helsinki.

"Dear America, appreciate your allies, after all you don't have all that many," he said.