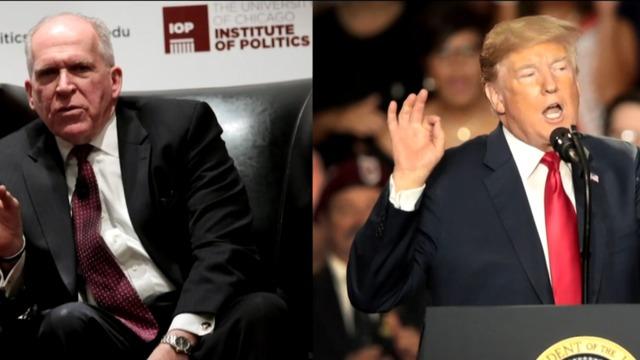 WASHINGTON -- President Trump abruptly revoked the security clearance of ex-CIA Director John Brennan, an unprecedented act of retribution against a heavily critical former top U.S. official. Later, in an interview with The Wall Street Journal, Mr. Trump drew a direct connection between his decision and the Russia investigation, citing Brennan as among those he held responsible for the probe.

"I call it the rigged witch hunt, (it) is a sham," Mr. Mr. Trump told the Journal, which posted its story on its website Wednesday night. "And these people led it!"

He added: "So I think it's something that had to be done."

That connection was not in a statement issued earlier Wednesday in which Mr. Trump denounced Brennan's criticism of him and spoke anxiously of "the risks posed by his erratic conduct and behavior." The president said he was fulfilling his "constitutional responsibility to protect the nation's classified information."

Mr. Trump also threatened to yank the clearances of a handful of individuals, including former top intelligence and law enforcement officials, as well as a current member of the Justice Department. All are critics of the president or are people he appears to believe are against him.

Mr. Trump's action against Brennan, critics and nonpartisan experts said, marked an unprecedented politicization of the federal government's security clearance process. It also was a clear escalation in Mr. Trump's battle with members of the U.S. intelligence community as the investigation into Russia election meddling and possible collusion and obstruction of justice continues.

And it came in the middle of the president's latest controversy - accusations of racism by former adviser Omarosa Manigault Newman and his bitter reaction to them. Mr. Trump's statement, distributed to reporters, was dated July 26, 2018, suggesting it could have been held and then released when needed to divert attention from a damaging subject. The White House later released a new version without the date.

Brennan, in a phone interview with MSNBC, called the move an "abuse of power by Mr. Trump."

"I do believe that Mr. Trump decided to take this action, as he's done with others, to try to intimidate and suppress any criticism of him or his administration," he said, adding that he would not be deterred from speaking out.

Brennan also took to Twitter, tweeting the would "not relent":

Democratic members of Congress, reacting to Mr. Trump's initial announcement, said his action smacked of an "enemies list" among fellow Americans and the behavior of leaders in "dictatorships, not democracies."

Mr. Trump, in his statement read by his press secretary, accused Brennan of having "leveraged his status as a former high-ranking official with access to highly sensitive information to make a series of unfounded and outrageous allegations, wild outbursts on the internet and television about this administration."

In the Journal interview, Mr. Trump said he was prepared to yank Brennan's clearance last week but that it was too "hectic." The president was on an extended working vacation at his New Jersey golf club last week.

Brennan has indeed been deeply critical of Mr. Trump's conduct, calling his performance at a news conference last month with Russian President Vladimir Putin in Finland "nothing short of treasonous."

Brennan continued that criticism on Wednesday. "I've seen this type of behavior and actions on the part of foreign tyrants and despots and autocrats for many, many years during my CIA and national security career. I never, ever thought that I would see it here in the United States," he said.

Former CIA directors and other top national security officials are typically allowed to keep their clearances, at least for some period, so they can be in a position to advise their successors and to hold certain jobs.

Mr. Trump's statement said the Brennan issue raises larger questions about the practice of allowing former officials to maintain their security clearances, and said others officials' were under review.

Ohr was friends with Steele, the former British intelligence officer commissioned by an American political research firm to explore Mr. Trump's alleged ties with the Russian government. He is the only current government employee on the list.

At least two of the former officials, Comey and McCabe, don't currently have security clearances, since they were fired, and none of the eight receive intelligence briefings. Mr. Trump's concern apparently is that their former status gives special weight to their statements, both to Americans and foreign foes.

"It's not just a courtesy," former Acting CIA director Michael Morell told CBS News last month. "For as long as I have been aware, which is probably two decades, former senior officials have kept their clearances. And the purpose is not to benefit the individual. It's to benefit the government. So, for example, I go into CIA regularly and I help them think through issues, I talk to people, I'm there to assist in any variety of ways. I also serve on a government commission that I could not serve on without having my clearances."

They said Mr. Trump has moved from threatening to revoke security clearances of former intelligence officials who have not been involved in the Russia investigation to former officials who did work on the probe. And they wonder if he will next choose to target those who currently work on the investigation, which Mr. Trump has called a "witch hunt."

The CIA referred questions to the White House.

Clapper, reacting on CNN, called Mr. Trump's actions "unprecedented," but said he didn't plan to stop speaking out. Asked what linked those threatened by the White House, Clapper said he and the others have been outspoken about the Mr. Trump administration, have "directly run afoul of it" or have taken actions the president dislikes.

"So I guess that's what we all have in common," Clapper said.

Sarah Huckabee Sanders, Mr. Trump's press secretary, insisted the White House wasn't targeting only Mr. Trump critics. But Mr. Trump didn't order a review of the clearance held by former national security adviser Mike Flynn, who was fired from the White House for lying to Vice President Mike Pence about his conversations with Russian officials and later pleaded guilty to lying to the FBI.

Democrats, and even some Republicans, lined up to denounce the president's move, with House Minority Leader Nancy Pelosi, D-Calif., slamming it as a "stunning abuse of power." Sen. Mark Warner of Virginia, the top Democrat on the Senate Intelligence Committee, warned that a "dangerous precedent" was being set by "politicizing the way we guard our national secrets just to punish the president's critics."

And California Rep. Adam Schiff, the ranking Democrat on the House Intelligence Committee, tweeted, "An enemies list is ugly, undemocratic and un-American."

Several Republicans also weighed in, with Sen. Bob Corker, of Tennessee, saying, "Unless there's something tangible that I'm unaware of, it just, as I've said before, feels like a banana republic kind of thing."

David Priess, a former career CIA analyst and daily intelligence briefer, told CBS News, "This is the first time I have seen or heard about something like this being done."

"I'm unaware of either a valid reason or any precedent for this action. It's dangerous, because it the president is ratcheting up tension in an already difficult relationship with his intelligence community. It's short-sighted, because it seeks to change the narrative away from the (Paul) Manafort trial and additional revelations of the president's heinous statements — but it only adds to the narrative of a man who breaks norms and possibly laws as he thinks it serves him."

"The clearances issued to former directors Brennan, Hayden and others are only for the government's benefit – it ensures continuity and that they can respond when needed to weigh in on matters of national security," Sipher said. "The CIA director or DNI should speak up on this one."

"That said, I do wish Brennan would refrain from making personal attacks," he continued. "He only helps Trump when he makes them."