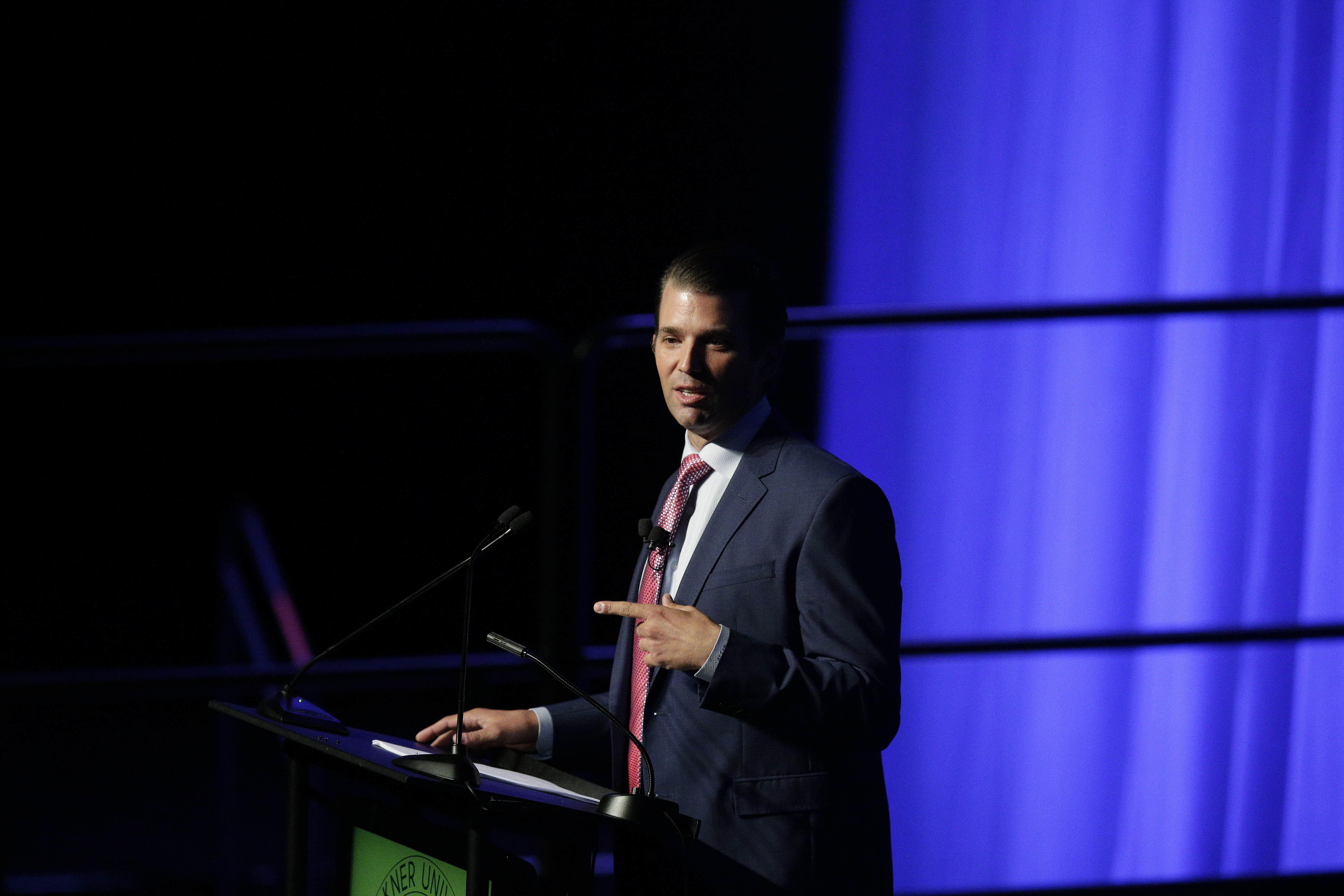 MONTGOMERY, Alabama -- Donald Trump Jr. on Thursday stood by his father's declarations that "both sides" were to blame after August's racially driven violence in Charlottesville, Virginia, where a white supremacist killed a counter-protester.

President Trump's eldest son said his father was criticized only because of an "atmosphere of hatred" on the left that the younger Trump blamed on liberal university campuses and traditional media.

"He condemned ... the white nationalists and the left-wingers," Trump Jr. said during the annual fundraising gala for Faulkner University, a private Christian university in Alabama. "That should not have been controversial, but it was."

Trump Jr., who was paid as Faulkner's keynote speaker, went on to cite examples of violence on the left. He mentioned antifa, far-left-leaning militant groups that call themselves anti-fascist, for outbursts in Berkeley, California. He alluded to the former Bernie Sanders supporter who shot at Republican congressmen gathering for baseball practice, nearly killing Rep. Steve Scalise of Louisiana.

"He went out looking for Republicans to kill," Trump Jr. said, "and we're supposed to forget that."

Trump Jr. did not go into detail about the Charlottesville melee, never mentioning the woman who was killed when a white nationalist drove a car into a crowd of counter-protesters.

Besides defending his father, Trump Jr. used much of his 35-minute address to mock the culture on most of the nation's college campuses, which he said teaches young Americans to "hate their country" and "hate their religion" while squelching conservative voices.

He noted instances where conservatives have been denied speaking opportunities or encountered protests upon their appearances.

He continued: "'Hate speech' is that America is a good country ... that we need borders ... anything that comes out of the mouth of the president ... the moral teaching of the Bible."

He also mocked some universities' focus on diversity, singling out the concept of "safe spaces" for women, minorities and LGBT students. He went on to praise two Alabama figures who played defining roles in the civil rights movement: Martin Luther King Jr. and federal jurist Frank Johnson, who enforced many of the Supreme Court's civil rights decisions.

Neither Trump Jr. nor his hosts at Faulkner mentioned his place at the center of ongoing FBI and congressional inquiries into Russian meddling in the 2016 presidential election. Trump Jr. moved to the fore of the Russia investigation in July amid revelations about a June 2016 meeting he helped arrange with a Russian attorney tied to the Kremlin.

Senate Intelligence Committee leaders from both parties this week declared that the issue of Russian meddling has not been settled, despite the president's claims of a "hoax" and "fake news." The committee staff has yet to interview Trump Jr., who has admitted he took the meeting with the Russian attorney expecting to get damaging information about his father's general election opponent, Hillary Clinton.

The address was part of Trump Jr.'s periodic paid speaking schedule that began before his father's election. A Faulkner spokeswoman confirmed the school paid Trump Jr. but declined to disclose his fee.

The North Texas Daily, the student newspaper at the University of North Texas, has reported Trump Jr. will be paid $100,000 to speak at a university fundraising event Oct. 24. An archived web page of Trump Jr.'s agency, All American Speakers, shows his speaking fee as "$50,001 and above." NBC News has reported the page was removed from the agency's website after NBC inquiries.