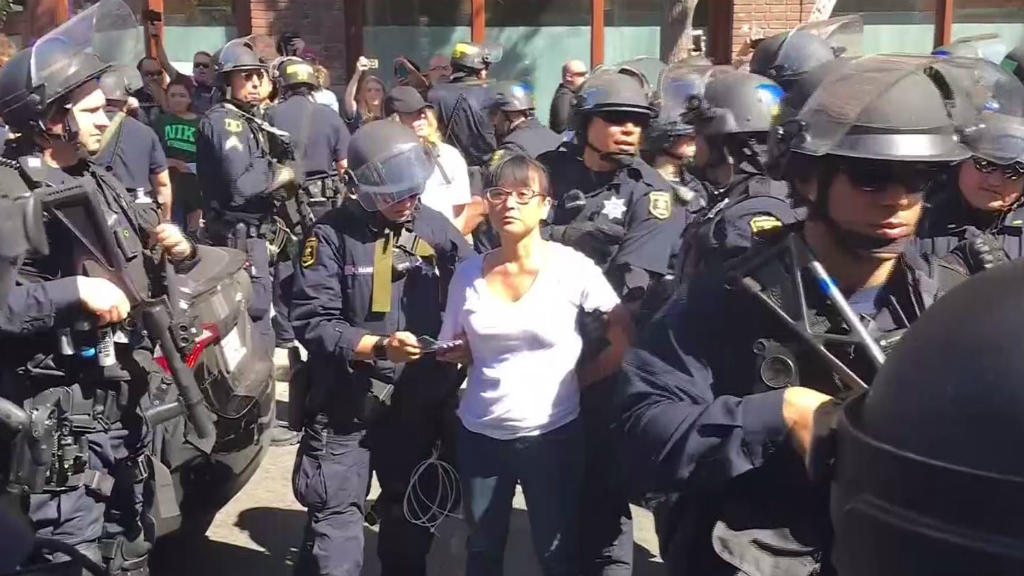 BERKELEY, Calif. -- Police arrested at least four people Tuesday during a small but tense rally staged by a politically conservative group at the University of California, Berkeley.

Amid heavy police presence, the protest was led by Joey Gibson, leader of a group called Patriot Prayer, and supporters including Kyle Chapman, a self-described "American nationalist."

Gibson had called for the rally after student organizers canceled a planned "Free Speech Week" this week that was to feature right-wing firebrand Milo Yiannopoulos. Gibson had posted a video on Facebook saying he wanted to bring attention to "disgusting things happening at Berkeley," the birthplace of America's free speech movement.

Counterprotesters determined to shut the event down got into shouting matches and scuffles with Gibson and his supporters inside an "empathy tent" set up on campus, and later in a city park.

Police said they arrested four people, including left-wing activist Yvonne Felarca, for battery and resisting arrest. Felarca, who works as a teacher in Berkeley, gained notoriety when she was arrested after being caught on video punching a neo-Nazi demonstrator during a July 2016 protest in Sacramento, CBS San Francisco reports. CBS San Francisco cameras were there as she was taken into custody. While police led her away with her hands behind her back, other protesters could be heard chanting "Let her go! Let her go!"

Three men were arrested on charges including possession of body armor, carrying a banned weapon and participating in a riot.

Counter-protesters, members of the media and others with cameras appear to outnumber the group from Patriot Prayer and there is a heavy police presence with officers working to keep the two groups mostly separate.

Berkeley's reputation as a liberal bastion has made it a flashpoint for the country's political divisions since the election of President Trump.

Four protests have turned violent on campus and in the nearby city in recent months, prompting authorities to tighten security as they struggle to balance free speech rights with preventing violence.