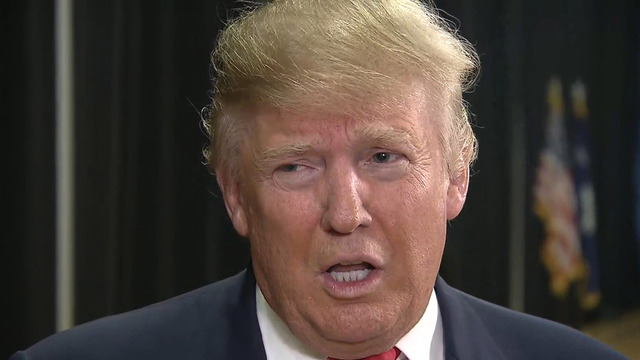 In a September 2002 interview with Howard Stern, billionaire Donald Trump was asked directly if he supported invading Iraq.

Trump's response then, six months before the Mar. 2003 invasion of Iraq, was, "Yeah, I guess so,"

Nearly 14 years later, critics are now pointing to that clip, first reported by BuzzFeed News, as proof positive that Donald Trump lied about his opposition to the Iraq war -- a war that he has repeatedly slammed his rivals (and their family members) over while on the campaign trail.

But in an interview Friday with CBS News' chief White House correspondent Major Garrett, the GOP front-runner doubled down on his past remarks.

"When I did the interview with Howard that was many, many months before the war started," Trump said. And, he added, his response had been "a very weak" one.

"That was the first person that ever asked me about the war," he continued. "I'm a businessperson so they're not asking me about the war. Then shortly after that I started saying -- I started really studying and looking at it -- I didn't like it because you're going to ruin the balance of the Middle East. Which is what happened."

"That was a long time before the war started. By the time the war started, I was totally against it and by 2003, you see my statements," Trump said. "I was against it. So look, the Iraq war, going into Iraq was one of the worst decisions in the history of this country. We're further behind now than the day we went in."

The Republican contender also attacked a prominent member of his party, GOP strategist Karl Rove, over the war.

Trump called Rove, who was a senior advisor to former President George W. Bush, "a very negative force" and a "loser." Earlier this week, Rove published an editorial in the Wall Street Journal declaring that "Trump didn't oppose the Iraq war" before 2003.

"I was against the war before it started. And you could see that...Karl Rove is an enemy of mine," Trump said. "I don't think he's ever said anything good about me and he's an incompetent person. The reason the Republicans are doing so badly in terms of presidential politics is the Karl Roves of the world, the establishment."

Trump has defended his Iraq war comments before. When asked about the interview during Thursday's CNN town hall, the contender dismissed the charges of hypocrisy and said he didn't remember the question.

"I could have said that. Nobody asked me. I wasn't a politician. It was probably the first time anybody asked me that question," he said. "But by the time the war started, I was against the war, and there are articles. I mean, there are headlines in 2003 and 2004 that I was totally against the war."