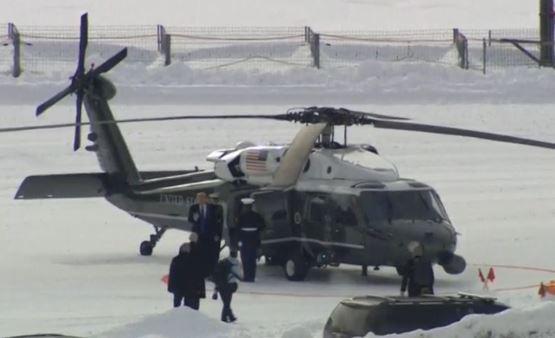 DAVOS, Switzerland -- President Trump arrived Thursday in Davos, Switzerland, to attend the World Economic Forum -- the first sitting U.S. president to do so since Bill Clinton in 2000. Mr. Trump will be pushing his "America First" agenda, along with a large team of his senior aides and cabinet officials, at the annual gathering of world leaders and the business world's elite.

With his arrival, there was a growing sense of anticipation among the delegates at the forum. Mr. Trump had meetings scheduled later Thursday with British Prime Minister Theresa May and Israeli Prime Minister Benjamin Netanyahu, and he is due to give a speech on Friday.

Danish Prime Minister Lars Lokke Rasmussen said he hoped Mr. Trump would flesh out his "America First" platform to show that it doesn't preclude cooperation with the rest of the world on some of the world's big challenges. He said: "I think everybody needs to realize, whether you are leader from a small or medium-sized or big country that you can't achieve what you want on your own."

Dalia Grybauskaite, Lithuania's president, said "we need global solutions and there is no choice but to be together and not isolate each other."

The trip comes as Mr. Trump is under global scrutiny for comments he made about "sh*thole countries" in a meeting on immigration with leaders in Congress, and for policies on trade and climate change that don't necessarily sit well with other world leaders.

South Korea and China are both pushing back on the new tariffs, and are likely to register complaints to the World Trade Organization. But the president and other administration officials will likely underscore their position that their policies will boost U.S. growth, arguing that when the U.S. does well, so does the world.

CBS News White House and senior foreign affairs correspondent Margaret Brennan says that will be a tough sell to attendees. For more than four decades, the World Economic Forum has been a champion of globalization. The annual conference has been seen as an event that fosters an interconnected world.

However, Brennan points out the president's business-friendly approach has won him praise. That includes lowering the corporate tax rate to 21 percent. With that, he's expected to urge foreign companies to invest in the U.S., having a private dinner with several CEOs Thursday night.

"He's got to deliver a speech that absolutely supports what he's done, but hopefully pulls those nerves down a little bit so there is no reaction, and we don't see any sort of economic repercussions," said Schlesinger. "Essentially, the president is going to say, 'Hey, what's good for the United States economy will in turn be very good for the world economy, you guys should like this.'"