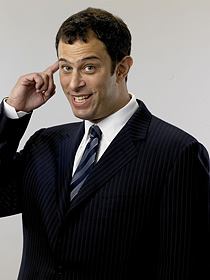 "Where's the love?" one woman asked scornfully. "The worst excuse for pizza I've ever had," snapped another. Then there were the references to "cardboard" and "ketchup," words that make any pizza-maker wince. But Domino's Pizza asked for them, and has even posted them here on a company-run Web site. The remarks, conceded a company chef, "hit you right in the heart."

Pizza is a $35 billion industry and Domino's gets a big slice of that — about $1.5 billion. The chain, which was founded 50 years ago in Ypsilanti, Michigan, today boasts almost 9,000 stores that deliver more than 1 million pizzas a day.

But what Domino's is known for is delivering pizzas quickly — not for making the most mouth-watering pie around. So in 2008, Domino execs began to reinvent its pizza. At the end of 2009, it rolled out the new and improved pizza, and launched an ad campaign that features consumers ruthlessly bashing its old recipe.

Scratching a known and popular product to roll out a new one is risky — as is letting people tell the world just what they thought of the old one. BNET spoke to Russell J. Weiner, Domino's chief marketing officer, to gain some insight into the pizza transformation and the self-deprecating marketing campaign.

The media has had a field day with your ads. Slate said of your television campaign, "It's hard to recall another recent ad in which a company self-flagellates with so much gusto."

People may look at the ad campaign and see it as insulting. That's not the way we see it. What we tried to do was tell a true story — not brutal, but the truth.

Also, I spent a lot of time thinking about how to change the perception of people who didn't buy Domino's. We talked to them, and read their blogs, and this is what they were saying. And I knew that, other than my mom, no one would care about "new and improved." So if we just said, "Hey, this is a new and improved pizza," we would not have gotten the doubters to try it.

Did you aim to get all this attention?

Emphatically yes! We have never seen the kind of reaction, from consumers and media, that we're getting with our new pizza and from our advertising campaign. Awareness is high; we're being talked about on blogs, in newspapers, on television news shows, and even the late-night entertainment programs. People are talking about Domino's, and more importantly, they're trying us — many for the first time in a long time.

When was the last time Domino's changed the recipe?

When it was invented. Then in the early 90s, we went from 10 slices to eight and made a few small tweaks, but nothing like this has ever been done before.

What went into the decision?

The decision dates to early 2008, when we were having our annual strategic planning meeting in Ann Arbor, where the leadership looks five to seven years out.

Everyone knew — and there were a lot of analytics behind this — that we got high marks for delivery, convenience, and value. We thought the opportunity existed to get credit for taste, too. We know that a lot of people hadn't tried us since college, or had stopped ordering from us five, 10 years ago. The idea was if we could win back some of those people, that would be a big opportunity.

So a conversation started to take place about how much we could capitalize on strength while addressing a perceived weakness. This was something [chairman and CEO] Dave Brandon laid out. So direction from the boss, combined with direction from our consumers, made it a no-brainer.

How did you go about redesigning the pizza?

We dissected our pizza, then reinvented it from the crust up. We tried scores of different sauces, cheeses, and doughs, with the idea of improving each of them. In each case, the market research found that the new elements recorded double-digit improvements in terms of purchase intent.

And we didn't stop there. While we knew which individual components tasted good, we had to make sure they worked together. I always say that two good-looking people can make an ugly baby; ingredients that work well by themselves can fail in combination. So you have to make sure that all the elements taste great together.

Was there a "Eureka!" moment?

The closest thing to that was probably with the crust. No matter how much we worked on the dough, there is no way to get around the fact that most of it is covered with sauce and cheese. So we realized that the best way to improve the dough was to improve the part that was not covered up. It was when we put a garlic-butter-herb seasoning on the crust that put us over the top. This gave us the biggest jump in the data.

Well, we have our own chefs and kitchens here in Ann Arbor, but obviously our plan is to sell outside of this building. So we spent tons of time — about 18 months — and millions of dollars looking at all the options.

Then we went to various parts of the country and did random sampling that we could then project to the U.S. as a whole. In the beginning, we focused on evaluating each element. We would make the exact same pizza, and change, say, just the sauce. Then we would ask people to taste the two samples, and give us their opinion — was the sauce too thick, too spicy, too sweet, too this, too that? This is what we call a "guidance test" and we did it on each separate ingredient — dough, crust, sauce, and cheese.

Once we established a sense of direction, we went back for another round of testing — the five best doughs, for example, and narrowed that down. Then we brought in different combinations — dough No. 1, say, with cheese No. 2; cheese No. 3 and sauce No. 4, and so on. We tested 36 different combinations. We took the favorites and put these through a robust quantitative test, with both the general population and heavy users, and we identified a clear winner.

Yes, but the decision was not just based on data. This is Domino's pizza; it's our baby. When the data came in, it was compelling, and we put it in front of the leadership team. We put the pizzas in front of them, too. David Brandon told us, 'I don't want to just see the data. I want to taste it.' His point was that this change should be something that people could taste for themselves. The data was important, but the product much more so.

We made the same presentation to the board of directors, having a kind of pizza party in the conference room at our headquarters. Then we did a road show telling the story to the franchisees and we had them try it as well. The results were incredible; the amount of support when we were out there was just remarkable. These were people who had spent a lifetime making pizzas and they were able to taste the difference for themselves.

Well, I can't say there were not people who were concerned. Heck, I was concerned. It's normal to have discomfort in making a big decision, but other than that, we had 1,000 percent alignment on doing this. The "New Coke" analogy that we've heard isn't quite right. The positions were different. Ours was a brand known much more for service; Coke was a brand known for taste, so they were changing a strength, while we were changing a relative weakness.

Well, I can't say there were not people who were concerned. Heck, I was concerned. It's normal to have discomfort in making a big decision, but other than that, we had 1,000 percent alignment on doing this. The "New Coke" analogy that we've heard isn't quite right. The positions were different. Ours was a brand known much more for service; Coke was a brand known for taste, so they were changing a strength, while we were changing a relative weakness.