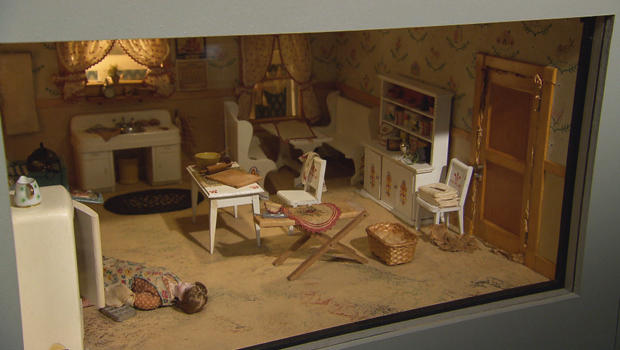 An exhibit in Washington is taking visitors to The SCENE OF THE CRIME ... and though what you're about to see isn't real, some of the images ARE troubling. Erin Moriarty, who's covered many an actual crime scene for "48 Hours," is our guide:

A warning before stepping inside the Smithsonian's Renwick Gallery in Washington, D.C.: These charming dollhouses on display are, in fact, miniature death scenes …

Where farmer Eben Wallace is hanging from a rafter in his barn … a housewife lays just inches away from her freshly-baked cake … and the entire Judson Family appears to be shot to death.

"This is definitely the most unusual exhibition that we've done here at the museum, and I think that I have done personally," said curator Nora Atkinson. She organized the first and only public exhibit of what are known as the Nutshell Studies of Unexplained Death.

Moriarty asked, "When you first chose to put on this display, was there a concern that this was just a little too macabre?"

"For sure," said Atkinson. "I wasn't sure if the public could handle it. And it's been an amazing success."

What draws in crowds are 19 scenes, most based on true events from the 1940s, re-created with mind-boggling details at a scale of one inch-to-one foot:  fully-stocked kitchens, tiny book ends, a half-inch rolling pin, newspapers with actual headlines.

"It's like a window into the past, which is really amazing," said Atkinson.

And, of course, as these are death scenes, realistic blood spatter on the walls.

Macabre, yes. But these carefully-crafted dioramas are not designed to shock; they are pioneering training tools for crime scene investigators, created more than 70 years ago by an Illinois heiress named Frances Glessner Lee.

Moriarty asked, "Is this actually art?"

"Well, I don't think Frances would've thought of it as art, but I definitely think it falls into that realm,' replied Atkinson.

Filmmaker Susan Marks has made two documentaries about Lee and the Nutshells. She described Lee as "an extraordinary woman … like no one in the world."

Lee was born in 1878, and while she never attended college, she helped transform the field of forensic science. Marks said, "She would collect every book that was out there about science, legal medicine and forensics so she could become an expert herself."

Her interest was sparked by a family friend, Dr. George Burgess Magrath, one of the first medical examiners in the country, who believed many cases went unsolved because untrained investigators contaminated or misread crime scenes.

Marks said, "They would talk for hours and hours in the evenings about crimes and the state of crime detection. And she decided, 'I can do something about that.'"

At age 65, Lee -- then living in New Hampshire -- began meticulously constructing the 3-D models, spending three to six months of each one.

"She would go about picking her cases very carefully," said Marks. "And then change the facts around a little bit so it didn't mirror too closely to an actual crime scene, so they wouldn't be easy to figure out."

Based on a motto Lee often heard from detectives ["Convict the guilty, clear the innocent, and find the truth in a nutshell"], she began to call her models "The Nutshell Studies."

"She wanted people to come to these and really investigate -- What were the circumstances of these people?" said Atkinson.

She even funded a forensic department at Harvard University that hosted seminars using her models.

Lee was so influential, in 1943 she was named police captain in New Hampshire, the first woman in the country with that rank.

"A lot of people did not appreciate her in her time," Marks said, "and she just kept pushing through. But she knew on some level that what she was doing was valuable and helpful."

After Lee died in 1962, everything was moved from Boston to the Maryland Medical Examiner's Office in Baltimore. Bruce Goldfarb, who maintains the dioramas ("I love 'em all. They're like my children"), says they're still used to help hone the observation skills of investigators.

"Their value today is the same," he told Moriarty. "There's no other medium that could do this."

And while the crimes they depict happened more than 70 years ago, Frances Glessner Lee recognized that some things never change. The dioramas depict drinking. Prostitutes, people far removed from Lee's own social circles.

Moriarty asked: "Why do you think she created it this way?"

"Because she felt it was important," Goldfarb replied. "Because that person's death deserves the same investigation as anybody else's."

The models will return to Baltimore when the Smithsonian exhibit ends. Until then, museum-goers get to struggle with the same questions that have stumped seasoned investigators for decades: What about Mrs. Barnes in the kitchen? The door is stuffed with newspaper. But was this really a suicide?

Or you can take a shot at solving the deaths of the Judson family.

"It doesn't look like the wife couldn't have done it, because it looks like she was shot in bed," Moriarty noted.

Atkinson added, "And the baby couldn't have done it, obviously. So it has to be an intruder, or the husband."

Still, if you are hoping for actual answers, you might be disappointed.

The answers to these miniature mysteries, Goldfarb explained, are literally under lock and key.

Atkinson said, "So you have to come to it with an open mind and an eye for those details and figure it out for yourself."

When The Beatles changed everything
Thanks for reading CBS NEWS.
Create your free account or log in
for more features.
View CBS News In
CBS News App Open
Chrome Safari Continue
Be the first to know
Get browser notifications for breaking news, live events, and exclusive reporting.