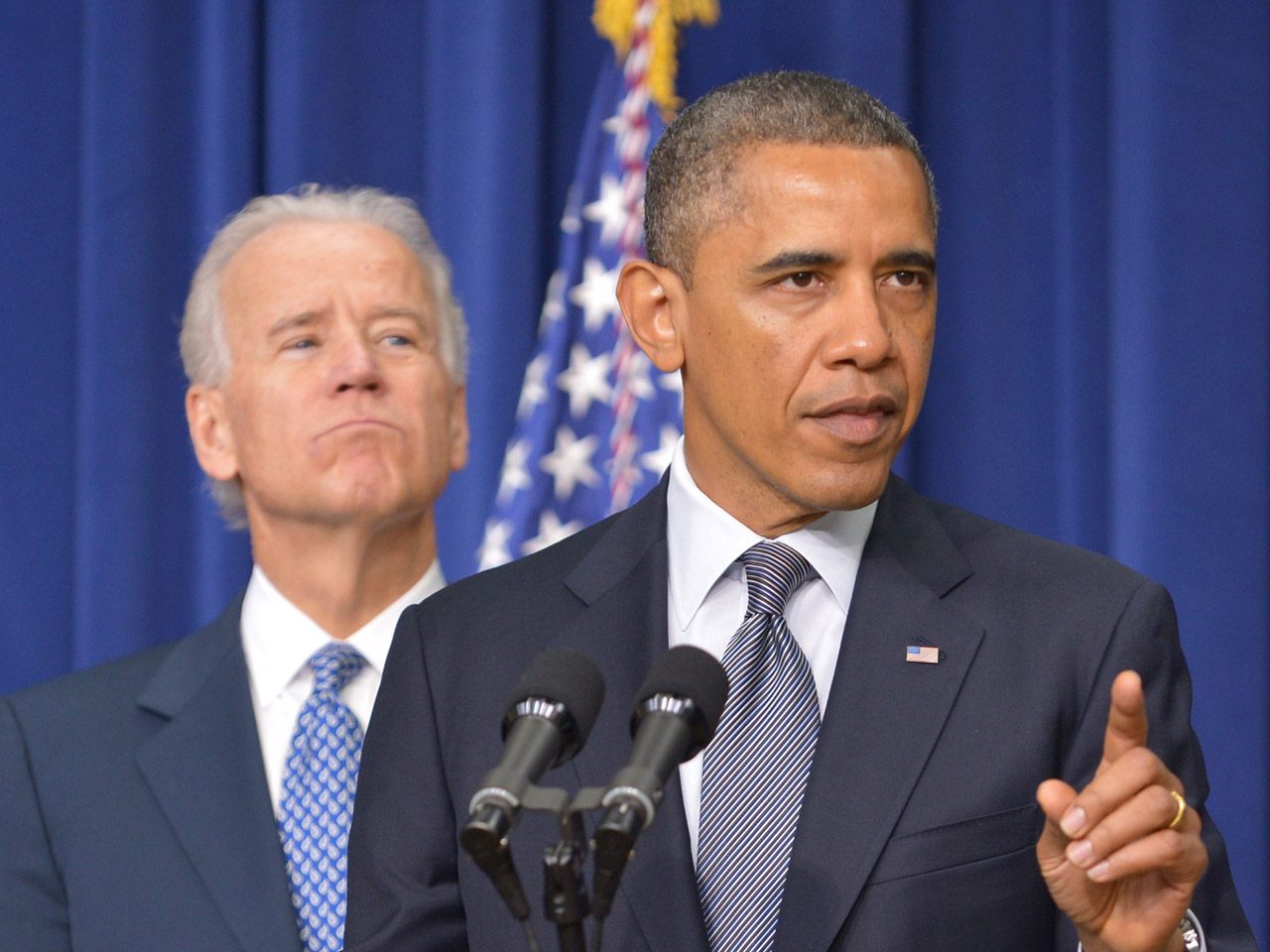 On Wednesday, President Obama initiated 23 executive actions designed to help combat gun violence. But as he himself acknowledged, there's only so much he can do on his own. The "most important" changes, he said, need to go through Congress.

"To make a real and lasting difference, Congress too must act," said the president. "And Congress must act soon."

There are three main actions that the president wants Congress to take. The first is to mandate background checks for anyone who wants to buy a gun. (Right now, gun buyers who want to avoid background checks can, for instance, purchase a gun from a private seller at a gun show.) The second is to reinstate the ban on military-style assault weapons and limit ammunition magazines to 10 rounds. And the third is to confirm Todd Jones as director of the Bureau of Alcohol, Tobacco, Firearms and Explosives. Congress has not confirmed an ATF director in six years, and the president argued that doing so would improve the ability of that organization to help law enforcement in combating gun violence.

The president is also calling on Congress to ban armor-piercing bullets and pass new gun trafficking laws, pass his $4 billion plan that would provide funding for 15,000 police officers, and "end the freeze" on funding public health research on gun violence.

Senate Majority Leader Harry Reid, D-Nev., said soon after Mr. Obama's remarks that he is "committed to ensuring that the Senate will consider legislation that addresses gun violence and other aspects of violence in our society early this year." Democratic lawmakers plan to introduce an "updated" bill to ban assault weapons and high-capacity magazines on January 24, and the Senate Judiciary Committee plans to hold its first hearing on the proposals on January 30.

Getting the 60 votes necessary to overcome a filibuster and pass a bill in the Democrat-led Senate won't be easy: The vast majority of Republicans as well as a minority of Democrats (mostly from the West and South) have traditionally been averse to new gun control legislation, and while some have softened their stance in the wake of the Newtown massacre, there remains considerable skepticism around passing what would be the most ambitious gun control legislation in decades.

"I will fight proposals in the Senate that threaten our Second Amendment rights and fail to take real action to curb a culture of gun violence in America," Pat Roberts, R-Kan., said Wednesday. "I fully support enforcing the gun laws currently on the books instead of creating new ones that erode basic rights of self-protection." Added Sen. Charles Grassley, R-Iowa: "The President seems to think that the Second Amendment can be tossed aside."

Getting the plan through the Senate is the (relatively) easy part. There is even more opposition in the GOP-led House, where Speaker John Boehner, R-Ohio, could simply refuse to bring the proposal up for a vote. (Boehner spokesman Michael Steel said Wednesday that House committees will review the president's plan, "[a]nd if the Senate passes a bill, we will also take a look at that.") Many conservative House Republicans have already made clear they have no interest in passing the president's plan.

"The right to bear arms is a right, despite President Obama's disdain for the Second Amendment and the Constitution's limits on his power," Rep. Tim Huelskamp, R-Mich., said Wednesday. "Congress must stand firm for the entirety of the Constitution - even if, but particularly so, when President Obama seeks to ignore his obligation to 'preserve, protect, and defend the Constitution of the United States.' Taking away the rights and abilities of law-abiding citizens to defend themselves is yet another display of the Obama Administration's consolidation of power."

Added Rep. Steve King, R-Iowa: "This is the latest attempt by the President to legislate through emotion, but doing so does not lead to quality legislation. Reducing violence across our nation is a worthy goal, but it is imperative that the Constitutional rights of our citizens are not forgotten in the process."

Over the past month, Boehner has brought to the floor two bills that did not have the support of most Republicans - the "fiscal cliff" bill and the Sandy aid bill - and he presumably has little appetite for another bitter fight that would again put him on the opposite side of the majority of his caucus. As they boarded buses for a retreat on Wednesday, CBS News asked Republican House members about the prospects for passage of the president's proposal. Their response is not likely to encourage gun control advocates.

Rep. Dennis Ross, R-Fla., said of an assault weapons ban and a 10-round limit on magazines, "I think they would be discussed but I don't if they'd be passed." Rep. Tom Marino, R-Pa., told CBS News that "the president's just making a political move and it's a shame that he's using this situation for political reasons."

Rep. Dave Reichert, R-Wash., said he believes "there has to be something done," but he said the first priorities should be mental health issues and enforcing current laws. Reichert, a former Seattle police department sheriff, added, "the assault weapons ban, the magazine limitations does not solve the problem of gun crime."

A poll out Wednesday showed that six in 10 Americans support tougher gun laws. But conservative lawmakers in the House are far less concerned with national polls than they are with the views in their district, where straying from the National Rifle Association's steadfast opposition to new gun control laws could anger pro-gun voters and invite a serious primary challenge. The NRA "scores" votes and assigns lawmakers grades on their performance on gun issues, grades that many lawmakers believe have a not-insignificant impact on their reelection chances. That perception goes a long way toward explaining why Congress has not passed any sort of gun control legislation since 1994.

The NRA, which briefly went silent after the Newtown shooting, is now aggressively fighting the president's efforts, as illustrated by a controversial ad Wednesday calling Mr. Obama an "elitist hypocrite" because he is "skeptical about putting armed security in our schools when his kids are protected by armed guards at their schools." The group is also reportedly using the full force of its lobbying muscle to fight the president's proposals, in part by arguing that the plan will mean lost jobs. According to the Center for Responsive Politics, 252 members of Congress - 225 Republicans, 27 Democrats - received donations from the NRA in 2012, and the group has donated $20.9 million to federal candidates since 1990.

Mr. Obama on Wednesday sought to counter NRA pressure on lawmakers by warning that "there will be pundits and politicians and special interest lobbyists publicly warning of a tyrannical, all-out assault on liberty -- not because that's true, but because they want to gin up fear or higher ratings or revenue for themselves." He said his plan would fail unless the American people "demand" action from lawmakers, and noted that Ronald Reagan backed an assault weapons ban.

But that appeal won't change the minds of most lawmakers, some of whom (including Sen. Marco Rubio, R-Fla.) are already pointing out that an assault weapons ban would not have impacted the weapon used in the Newtown tragedy. (A ban on high-capacity magazines would have made the 30-round magazines that police say were used in the shooting illegal, however, and assault weapons were used in other recent mass shootings.)

Indications out of Congress are that the assault weapons ban faces the longest odds; a ban on high capacity magazines seems to have a slightly better chance at passage, particularly if combined with the improved mental health screenings being pushed by many Republicans. The best odds appear to be for passage of a requirement for universal background checks, which a new CBS News/New York Times survey found is supported by 92 percent of Americans, including 85 percent of NRA households.

But the battle will be fierce: During Mr. Obama's gun control event on Wednesday, Twitter lit up with calls for the president to be impeached. That response follows a statement two days earlier from Rep. Steve Stockman, R-Texas, who threatened to file articles of impeachmentif the president tries to circumvent Congress on gun control.

Dennis Ross, the Republican congressman from Florida, seemed to sum up the prevailing attitude within his caucus before leaving for the GOP retreat on Wednesday.

"I think there's an appetite for a discussion, but I doubt there will be much in terms of changes," he told CBS News.