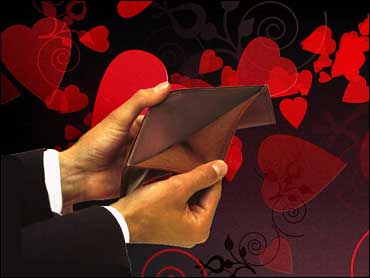 This story, by Kate Ashford, originally appeared at CBS' Moneywatch.com

The Beatles told us that all you need is love. And maybe that was true in 1967. But these days, love alone doesn't pay the mortgage. So, as we approach Valentine's Day, it's a good time to consider the other side of the coin: Can love bring you money?

A recent report from the Pew Research Center confirmed that, statistically, the answer is yes - if you get married. The Pew analysis echoes earlier research showing that married life tends to make people richer. (We'll optimistically assume that married couples are in love.) For example, several studies have found that by retirement age, married people have more in the bank than couples who are divorced or who've never married. Ohio State University found the difference is nearly twofold. And, while love seems to improve a married couple's bottom line, studies show that living together without exchanging vows doesn't provide the same payoff.

Why is marriage such an economic turn-on? Turns out, there are three reasons:

Married folks typically share the cost of health insurance, utility bills, and the mortgage payment, among other things. So you gain the advantage of two incomes paying for the expenses of living under one roof.

For men, especially, that's a much better bargain than it used to be, now that more wives have sizable incomes that help cover household costs. "Marriage wasn't a particularly good deal for young men back in 1970," says Richard Fry, co-author of Pew's recent report on marriage. "If your wife wasn't working, your household income didn't go up, but your household got bigger." Back then, even when wives worked, they contributed just 2 to 6 percent to their household's income, on average. Today, more than two-thirds of men have working spouses and 22 percent of wives make more than their husbands.

From 1970 to 2007, median household income for married men and women rose more than incomes for unmarried men and women, according to Pew. Experts speculate that once people exchange vows, they have more of a stake in their economic future because they're legally bound to the fate of others. You both know you're probably going to have to put the kids through college and you hope to eventually retire with your spouse, so the two of you work as hard as you can to achieve both goals. Says David Popenoe, co-director of the National Marriage Project at the University of Virginia: "Married people - even when you look at them before marriage and after marriage - tend to be more productive and earn more. They're supporting others."

In his new book, Your Money Milestones, York University business professor Moshe Milevsky cites a study of women in Italy that found the married women had a much larger fraction of their money in stocks than single women - and over the long term, of course, stocks have outperformed safer alternatives such as bank CDs. "Married people tend to invest more, save more, and they're more future-oriented," says Christine Whelan, a professor of sociology at the University of Pittsburgh.

To be sure, there's an important chicken-and-egg caveat: College-educated people are more likely to get married than people lacking the diplomas, and a college education tends to offer long-term financial benefits. In 2007, 69 percent of college grads were married, compared with 54 to 55 percent of men and women with just a high school diploma The college-educated "are probably more likely to end up with more wealth later in life," says Janet Wilmoth, a senior research associate with the Center for Policy Research at Syracuse University.

Cohabitation doesn't offer the same monetary leg up, because couples who live together don't always behave like married people, economically speaking. They're less likely to own a home together or share a savings account. They also miss out on some juicy tax benefits, such as larger exemptions for filing jointly, tax-free wealth transfers, and inheritance rights. One study on same-sex couples in the New York City area found that unmarried couples with children earned less than families with married parents. And the same-sex couples were also less likely to own their own home. (See "Money Tips for Gay Couples" to learn more about dealing with financial obstacles they face.)

So if love can bring you money, can money bring you love? The Magic 8-Ball says: Signs point to yes. One study from Nottingham University found that while 68 percent of lottery winners were married before they hit the jackpot, the figure jumped to 74 percent afterward.

As unfair as it may be, money tends to increase a person's attractiveness to others. Interestingly, as gender roles evolve, this dynamic is becoming stronger, rather than weaker. A study at the University of Iowa found that being a "good financial prospect" is increasingly important to men looking for a mate. Although this attribute ranked No. 18 out of 18 on a list of characteristics men wanted in a woman in 1967, it rose to No. 12 in 2008. For women, "a good financial prospect" now comes in at No. 10. "Earning more makes you more marriageable," says Whelan, co-author of the study. "As times are tight economically, it just makes sense to try to pair up with somebody who's going to be a good financial prospect."

And in a scientific finding sure to gladden the hearts of high-end clothiers and Lamborghini salesmen everywhere: Men who use their money to buy status symbols may boost their chances of finding a partner. One study from the University of Wales found that women were more attracted to a man in a fancier car, for instance. (The study found it doesn't work the other way around.) A word of warning to men: Buying a fancy car after getting married may not increase your attractiveness in the eyes of your wife.

More on MoneyWatch:
• 10 Ways to Stop Fighting About Money
• Video: 3 Money Questions for Your Honey
• He Spends, She Saves … They Fight
• Money Tips for Gay Couples
• 4 Rules: Stop Fighting with Your Spouse About Money
• Couples Need to Talk About Their Finances
• Financial Infidelity: Is Your Marriage at Risk?
• Quiz: Your Love and Money Score
• Video: Rent or Buy? One Couple's Choice
• Keep the Money in the Family
• 'Mom' or 'Family CEO'? I'll Stick with the Former
• Video: For Working Moms, Big Changes