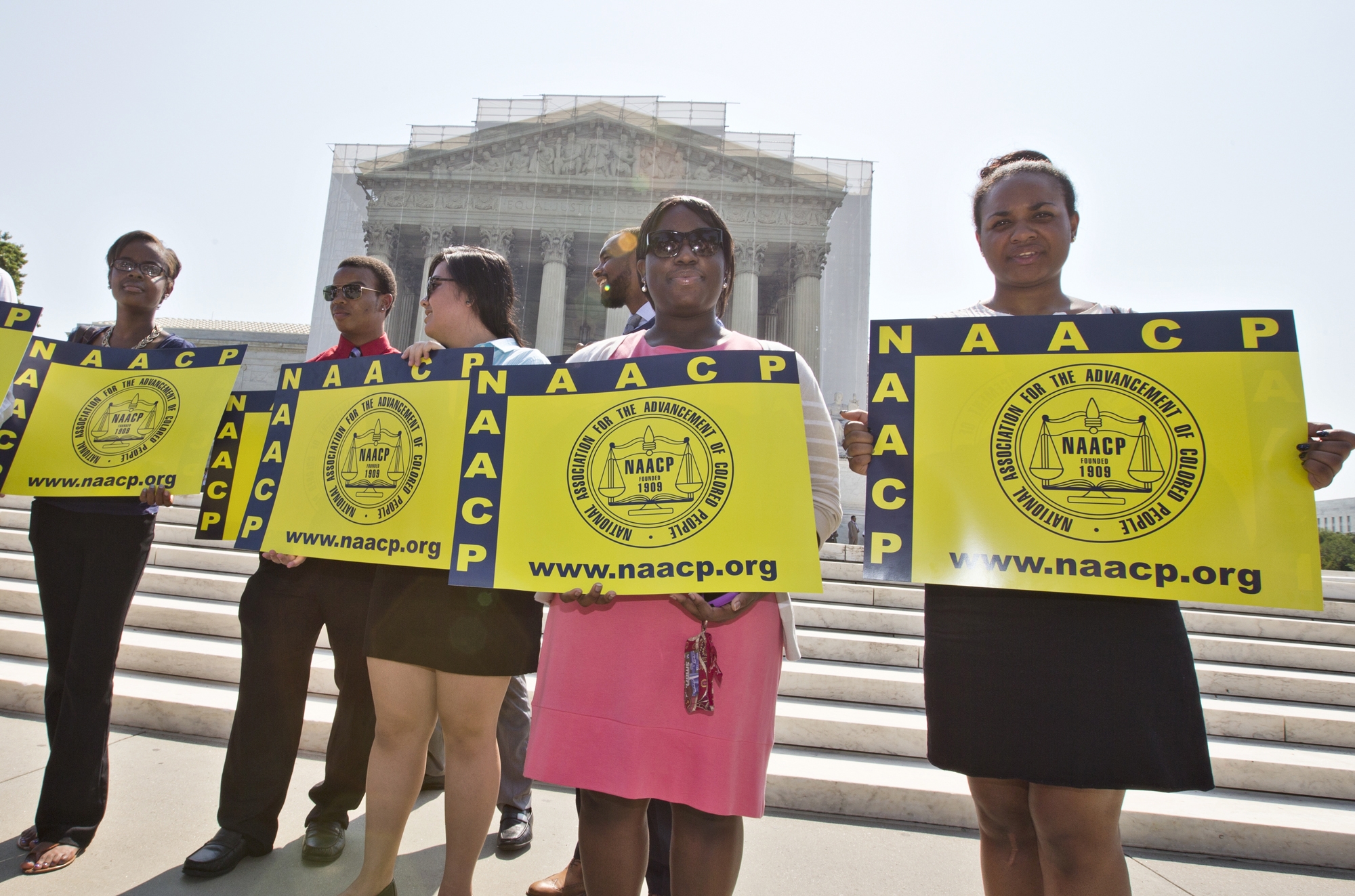 When President Obama earlier this year marked the 50th anniversary of the civil rights marches in Selma, Alabama, he argued that America's racial history "still casts its long shadow upon us."

As racial tension continues to plague the nation, he lamented that the Voting Rights Act -- "one of the crowning achievements of our democracy" -- has been "weakened, its future subject to political rancor."

"Right now, in 2015, 50 years after Selma, there are laws across this country designed to make it harder for people to vote. As we speak, more of such laws are being proposed," the president continued.

That's why on Thursday, on the 50th anniversary of the Voting Rights Act, Mr. Obama will speak to the public about "the importance of restoring the landmark law," according to White House spokesman Josh Earnest. In a video teleconference with citizens from across the nation, the president will join Attorney General Loretta Lynch and Rep. John Lewis, D-Georgia, a civil rights icon who marched in Selma in 1965, to talk about efforts to protect voters' rights.

Voting rights has been a major concern for Democrats since the Supreme Court in 2013 wiped out a whole section of the Voting Rights Act, taking away one of the strongest tools the federal government has at its disposal for the past five decades to block discriminatory voting laws.

This year, however, efforts to amend the Voting Rights Act are going nowhere in the House or the Senate, and the rest of the GOP has shown no interest in advancing the issue. In April, Sen. Chuck Grassley, R-Iowa, chairman of the key Senate Judiciary Committee, suggested there's no need to update the law because "more minorities are already voting." In a statement to CBS, Grassley added, "Voting discrimination remains illegal after the Supreme Court's ruling, and cases are still being brought under separate sections of the Voting Rights Act." Additionally, he said, "There is no consensus on how to move forward."

Of course, minorities in America are no longer subject to poll taxes or other overt means of discrimination at the ballot box.

Even so, Democrats like Rep. John Lewis have argued that the recent spate of restrictive voting laws enactedacross the country represent "a deliberate, systematic attempt to make it harder and more difficult for the disabled, students, seniors, minorities, the poor, and rural voters to participate in the democratic process."

Specifically, Lewis is referring to laws like voter ID requirements, as well as laws that scale back tools to make it easier to vote, such as same-day registration, out-of-precinct voting, or early voting. Those laws largely affect minority, low-income and elderly communities -- for instance, the Brennan Center reported in 2012 that 25 percent of African-Americans, 16 percent of Hispanics, and 18 percent of Americans over age 65 do not have a government-issued ID.

The president and others strongly argue that voter ID laws are designed to suppress voter turnout, but even proponents of a robust Voting Rights Act argue the issue is now less about racial discrimination and more about partisan politics.

Support for preserving the landmark law has waned among the GOP since 1965, as the makeup of the Republican and Democratic parties has evolved, explained University of California, Irvine professor Richard Hasen, an election law expert.

"This partisan realignment means that voting rights protections which protect African-Americans and other minorities often give an advantage to Democrats," he said. This created a "sea change" in views about the Voting Rights Act, Hasen added, prompting Republicans to view it "more as protection for the Democratic Party than against discrimination on the basis of race."

Roger Clegg, president of the Center for Equal Opportunity, told CBS News he believes the controversy over voter ID laws and other restrictions is "not really about racial discrimination at all."

For now, the Obama administration and their allies are using the remaining elements of the Voting Rights Act to aggressively challenge restrictive voting laws in court.

Just last week, a federal judge heard closing arguments in a trial against the voting restrictions enacted by Republican lawmakers in North Carolina in 2013. The Justice Department and others argue that the North Carolina laws -- such as the elimination of same-day registration -- violate Section 2 of the Voting Rights Act. That section of the law makes it illegal to discriminate on the basis of race.

Clegg and other conservatives argue that these cases prove the Voting Rights Act still gives the Justice Department the tools it needs to fight discriminatory laws.

Proponents of a more robust Voting Rights Act argue that Section 4 would have prevented these fights completely. The now-defunct Section 4 of the law provided a formula for determining which states had to have any changes to their voting laws pre-approved by the Justice Department's civil rights division or the D.C. federal court. Nine states -- including North Carolina and Texas -- were required to get pre-clearance, until the Supreme Court scrapped the rule, challenging Congress to re-write the formula.

Hasen called both the North Carolina and Texas cases "a key test of the scope of Section 2 of the Act and how far it goes toward preventing states from rolling back voting protections."

It's very likely the cases make it to the Supreme Court, he said.