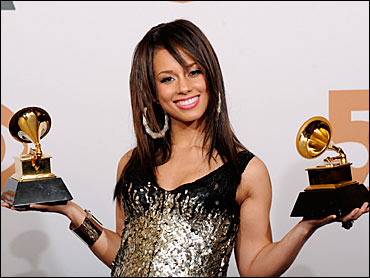 On Alicia Keys' previous CDs, the gifted singer-songwriter-pianist presented songs that were epic and impeccable more so than her actual albums. Tunes like "Fallin'," "If I Ain't Got You" and "Like You'll Never See Me Again" are timeless grooves that helped make the R&B singer a global, Grammy-winning superstar.

What's unfortunate is that "The Element of Freedom," Keys' fourth studio release, does not have a jam as outstanding as her past hits. Most of the songs are mediocre, like the first single, the empty-sounding "Doesn't Mean Anything." Even her duet with Beyonce on the Swizz Beatz-produced "Put it in a Love Song," is a disappointment - it's an amateurish dance tune on which the guest overpowers the main star.

Perhaps the best thing you can say about "Freedom" is that the songs mesh well, and create a smooth sound, albeit weak one.

Of course, Keys' soaring voice always shines, even on so-so songs. It especially stands out on the yearning "Un-thinkable (I'm Ready)," the gloomy but groovy opening track, "Love Is Blind" and "Try Sleeping With a Broken Heart," an elevated drum-filled pop ballad that showcases the singer's versatility.

CHECK THIS TRACK OUT: Keys, who isn't known for collaborating with many artists on her own CDs, enlists music's most anticipated singer-rapper, Drake, on "Un-thinkable (I'm Ready)." The newcomer takes a back seat to Keys by singing background vocals. She takes you on a lovely, magic carpet ride on this "ready for love" tune.
By Mesfin Fekadu