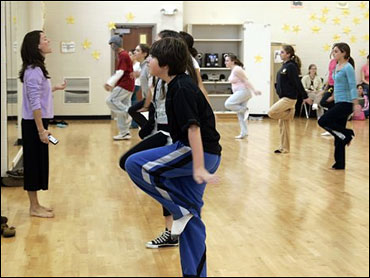 In a mirror-lined dance studio, teenagers sashay through a number from the musical "Hairspray." Next door in the weight room, teacher Shawn Scattergood demonstrates proper form on the leg press.

At Northport High School on Long Island, physical education also includes yoga, step aerobics and fitness walking, as well as team sports like volleyball and basketball. There are archery targets, soccer fields and a rock-climbing wall where students inscribe their names to show how high they get.

For anyone who grew up when P.E. meant being picked last for softball, it's a dizzying array of choices.

"What we try and do is give them a real broad offering so that they can choose things they want to do," said Robert Christenson, the director of physical education. He said the current curriculum has been developed over the last five years.

While the offerings at Northport, where the median household income is $86,456, may exceed those at many public high schools, the school is representative of a national phys ed trend that promotes fitness and downplays competitive sports that leave the uncoordinated feeling left out.

"There's been a major trend by school districts to improve their fitness centers," said Tom Caione, director of physical education for the suburban Bedford Central School District north of New York City. "It's really not 'roll out the old ball,' as it was."

George Graham, a professor of kinesiology at Penn State University and past president of the National Association for Sport and Physical Education, said there has been a revolution in the way physical education is taught in America.

"Historically, there were two emphases: competitive team sports and physical fitness testing," he said. "The emphasis today is more on helping youngsters develop the competence that leads to confidence and enjoyment of a lifetime of physical activity."

"We have schools teaching yoga, rock climbing, martial arts, fly fishing," Graham said. "If a kid is in a program that hasn't changed from when the parents were in school, it's just not OK."

The changes are occurring amid growing concern that sedentary lifestyles are fueling an epidemic of childhood obesity, with experts estimating that 30 percent of American schoolchildren are overweight or obese. According to the Centers for Disease Control and Prevention, only about 6 percent to 8 percent of schools provide the daily physical education classes that advocates recommend.

In Florida, high school students need only one year of P.E. to graduate, said Jane Greenberg, who heads the Division of Life Skills and Special Projects for Miami-Dade County public schools.

But more Miami-Dade students are choosing to take phys ed since the district started providing elliptical trainers and heart-rate monitors and adding classes like kayaking and snorkeling, Greenberg said.

"By offering these more innovative lifetime activities we're getting them back," she said. "On the average the kids that are overweight are losing 8 to 10 pounds a semester."

At Northport High, the gleaming weight machines and well-maintained tennis courts rival an expensive health club. There is also a sprawling "adventure" area where students can perform team wall-climbing exercises or reach for a trapeze from the top of an 18-foot pole.

Fourteen-year-old Stephen Jackman said he enjoys team sports like flag football and ultimate Frisbee but was looking forward to the weightlifting unit, because "you're just competing against yourself."

As remarkable as the up-to-date equipment, the school district's mission statement is striking, too: "Classes are undertaken in an active, caring, supportive and non-threatening atmosphere in which every student is challenged to grow. ... Every student, regardless of ability or ability level, is provided with a learning environment that is modified, when necessary, to allow for maximum participation."

At the recent dance class, led by full-time dance teacher Kaylie Howard, pupils were at all ability levels and one was in special education.

"There's no reason to feel bad," said Michael Carbuccia, 16. "Maybe it's just Ms. Howard. If you have trouble with something she'll help you personally. We're all doing our best and we're happy with it."