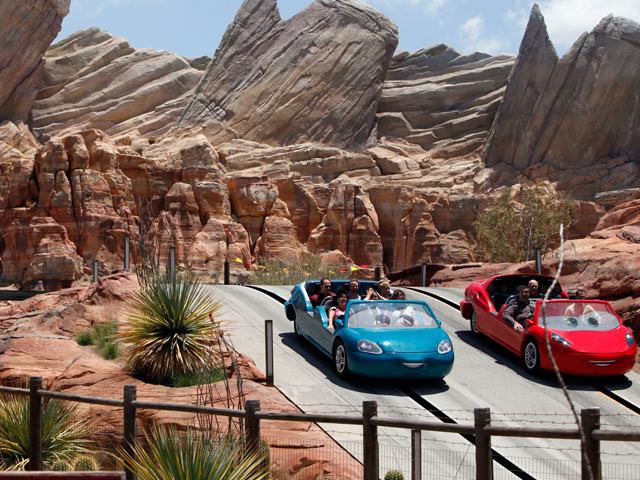 Wednesday marks the end of a five-year, $1 billion-plus overhaul to correct problems at the park. The venue, which was supposed to turn the Disneyland Resort into a multiple-day destination like Walt Disney World in Florida, had become a source of embarrassment for the company almost from the moment it opened in 2001. Visitors grumbled that it had little connection to Disney and complained that it seemed built on the cheap.

Walt Disney Co. CEO Bob Iger recently admitted the park had been "a brand eyesore." He told investors the revamp will fix what was "clearly a problem" and lift business across the resort area, which includes Disneyland next door.

Theme parks are more than just fun and games for Disney. Five park locations, including Tokyo, Paris and Hong Kong, along with cruise ships and vacation time-shares generated $11.8 billion in fiscal 2011, almost 30 percent of the company's $40.9 billion in annual revenue.

Mickey Mouse will get his Starbucks fix
Watch: Disney cracks down on junk-food ads
Disney to scrap junk-food ads from programming for kids

Disney had expected California Adventure would lead people to stay in its hotels, extending their stays in Anaheim. Instead, it became a place for adults to get an alcoholic drink, or kids to spend a few hours on generic-themed rides, before going back to Disneyland.

The park's revamp has debuted in spurts since 2008. Most of its new features rely on characters that come from Disney's $7.4 billion acquisition of Pixar Animation Studios, the studio behind "Cars," ''Toy Story," ''Monsters Inc." and "A Bug's Life."

The park is now "a worthy companion to Disneyland at this point," said Al Lutz, a hard-nosed critic who is editor of the Disney blog called MiceAge. Lutz credits the overhaul with boosting attendance at Disney California Adventure, which is estimated by the Themed Entertainment Association at 6.3 million last year, up about 12 percent from 2007.

Disneyland attendance grew 9 percent over the same period to 16.1 million.

Having multiple parks in the same location gives Disney a way to charge visitors for "park hopper" privileges and to sell more single-day tickets that give access to one park only. The successful formula, started in the six-park goliath in Orlando, has been repeated in Tokyo and Paris as well.

The revamp replaced many California-themed rides with rides that have Disney storylines.

And Cars Land, a 12-acre (5-hectare) area based on the Pixar movie "Cars," opens Friday with three new rides and a re-creation of the fictional town of Radiator Springs on Route 66.

"If you're a little kid and you just want to have that visceral enjoyment ... you'll have that, but if you're a Disney-phile and you really want to get those deep, deep, deep stories, they're here too," said Lisa Girolami, senior show producer of Walt Disney Imagineering, on a recent tour.

Along with encouraging longer stays, the investment helps Disney's image, since the parks are a way millions of people are exposed to the Disney brand every year. Gate prices also rose last month, to $200 for a two-day "park hopper" pass for visitors aged 10 and up, compared to $173 previously.

"When you spend more time in a park, you spend more on drinks and food and souvenirs," said Gene Jeffers, executive director of the Themed Entertainment Association. "The perception of the value you got for that ticket goes up quite dramatically and it helps with repeat visits."

The new touches are part of a wave of investment by Disney in parks and resorts that is expected to top $3 billion in the fiscal year through September, the highest in company history.

Among the recent projects:

Disney is also building a new theme park in Shanghai.

The investment in parks and resorts has hit $10.5 billion since Iger became CEO in October 2005, significantly more than the $8.2 billion predecessor Michael Eisner spent in the last seven years of his tenure.

"They've set themselves up for long-term growth in the parks business through these strategic investments," said Tony Wible, an analyst with Janney Capital Markets. "I would have thought it was a pretty mature asset but they're managing to squeeze some real growth out of it."