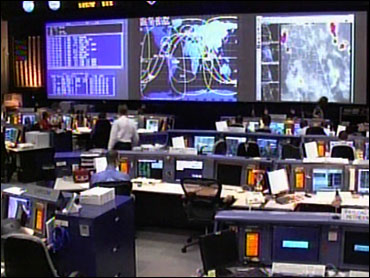 NASA will activate three landing sites for Discovery's return to Earth, CBS News Correspondent Lee Cowan reports — increasing the chances that one of them will have acceptable weather so that the anticipated shuttle landing can finally get underway.

More cloudy weather was expected at Kennedy Space Center on Tuesday with a chance of rain, but it remained NASA's first choice for an early morning touchdown, scheduled for 5:07 a.m. Second choice for landing Tuesday is Edwards Air Force Base in California's Mojave Desert, and if that's not suitable, NASA is ready to try landing the shuttle at the White Sands Missile Range in New Mexico.

Click here for our live webcast
of NASA TV's coverage of space shuttle
Discovery on its way back to Earth.
Good conditions have been predicted for Edwards, and rain has been in the forecast for White Sands.

After nearly two weeks orbiting the Earth, astronauts aboard space shuttle Discovery were told to hold off one more day before re-entering Earth's atmosphere as bad weather in Florida forced NASA to delay Monday's scheduled landing.

The astronauts had powered up their spacecraft and were awaiting word from Mission Control to fire their braking rockets and head for home at the expected time of 4:47 a.m. when controllers announced early Monday that low clouds over Cape Canaveral would postpone the landing.

There was an air of disappointment at Houston's Mission Control, Cowan reports.

"We've been working this pretty hard as I'm sure you can imagine from our silence down here," Mission Control radioed Discovery commander Eileen Collins. "We just can't get comfortable with the stability of the situation for this particular opportunity, so we are going to officially wave you off for 24 hours."

When cloud cover still threatened after the second of two landing opportunities, NASA officials rescheduled the landing for Tuesday.

Weather delays of space shuttle landings are fairly routine, but because the Discovery mission is under a public microscope, even such a standard procedure is getting extra attention.

Before the weather deteriorated, Discovery had been set to land at Florida's Kennedy Space Center before dawn. Its return to Earth would have concluded the first shuttle flight since Columbia disintegrated while re-entering the Earth's atmosphere 2 1/2 years ago.

Observed astronaut John Herrington, who was at the runway waiting: "It's better to be on the safe side."

Getting an extra day in space isn't all that bad, according to astronaut Robert Curbean.

"Usually it's mostly sightseeing. You're taking pictures, and just enjoying the free time," said Curbean, who has been on two shuttle mission — neither of which returned on time.

His only complaint, Cowan reports: getting in and out of his space suit.

From day one, NASA played it safe with Discovery. The shuttle's first launch attempt was scrubbed, and it did not take off until a week and a half later.

Discovery's 14-day flight to the international space station may be the last one for a long while. NASA grounded the shuttle fleet after a slab of insulating foam broke off Discovery's external fuel tank during liftoff — the very thing that doomed Columbia and was supposed to have been corrected.

After Discovery's July 26 launch, the shuttle spent nine days hitched to the space station, where astronauts resupplied the orbiting lab and removed broken equipment and trash — one of the main goals of the mission.

Discovery was the first shuttle to visit the station since 2002.

The station itself is only half finished, and there is there are promises that have to be kept to the agency's international partners before the shuttles are retired five years from now.

Astronaut Scott Parazynski - who is scheduled to install a new truss on the space station next year - told Cowan that the project is crucial to NASA's larger mission.

"We're also going to be using the laboratory of the space station to develop the technologies that will take us back to the moon, not just to visit, but to stay," Parazynski said.

CBS News Correspondent Mark Strassmann reports that the Discovery crew completed its portion of the mission with seeming flawlessness. During the trip, a pair of spacewalking astronauts replaced a failed 660-pound gyroscope, which controls the orientation of the station, and restored power to another. Sunday was the first time in three years that all four of the station's gyroscopes ran simultaneously.

In a third unprecedented spacewalk, astronaut Stephen Robinson went beneath Discovery's belly to gently tug out two protruding thermal tile fillers. Engineers on the ground worried the material could cause dangerous overheating during re-entry and could lead to another Columbia-type catastrophe.

Those on the ground learned about the material jutting out from Discovery's fragile thermal tile belly through intense inspections of the ship using cameras and lasers.

As a result of Columbia, Discovery's crew inspected their ship for damage on five different days during the mission and also tested repair techniques developed since the tragedy.

Columbia was doomed by a 1.67-pound piece of foam that broke free from an external fuel tank at launch. The foam pierced a hole in the ship's left wing and as the spacecraft re-entered the Earth's atmosphere, searing gases melted the wing from the inside, causing the ship to break apart. All seven astronauts aboard were killed.

NASA officials' excitement over Discovery's return to space was dampened by video that showed a nearly 1-pound chunk of foam — reminiscent of the one that doomed Columbia — breaking free from Discovery's external tank shortly after liftoff. The foam did not strike Discovery.

The agency quickly grounded future flights, saying that more work must be done, despite spending hundreds of millions of dollars to redesign the tank.