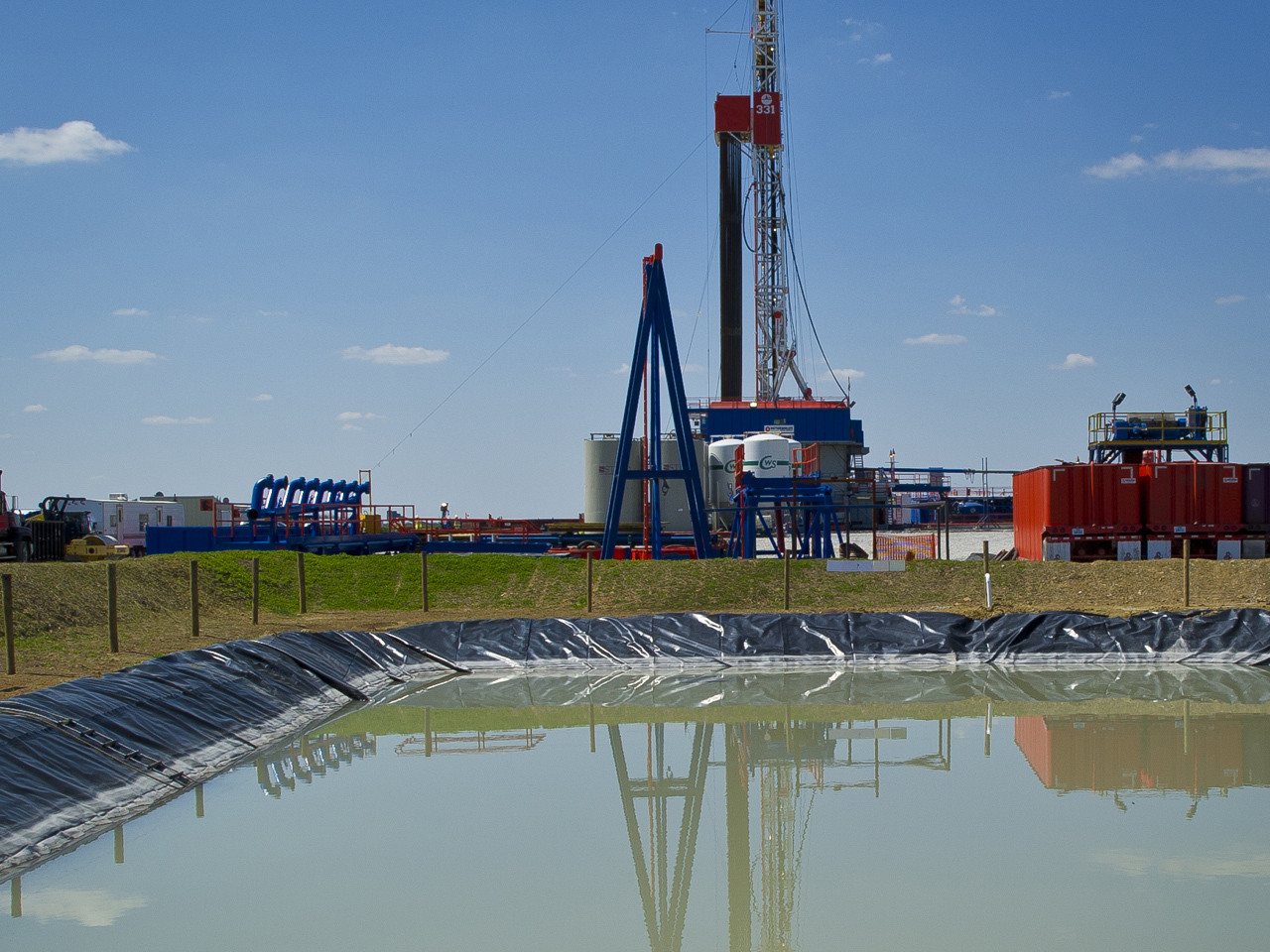 (CBS News) Natural gas can be cheap and plentiful, and could supply us with energy for decades to come. But to get AT all that natural gas, you have to delve far beneath the surface of the earth. That's where FRACKING comes in. David Pogue of The New York Times reports our Cover Story:

What if I told you that we have a new source of fuel? It's cheap, it burns cleaner than coal, it's found right here in America, and there's enough of it for the next hundred years.

The fuel is natural gas. And the new source? Gigantic deposits of shale rock, miles underground. This one is called the Marcellus Shale. It covers 95,000 square miles, across four states.

The gas is locked in the rock. If you crack a piece off you can actually smell the gas inside.

Pogue toured a new shale-gas well with George Stark, who represents Cabot Oil and Gas, the second largest gas producer in the Marcellus.

And how do you get gas from shale? With a high-tech operation called fracking.

In fracking we drill way, way down, past the water table, as far as a mile deep and then - here's the technologically amazing part - we make a right turn, and drill horizontally through that layer of shale, so we can "slurp up" all the delicious oil and gas.

The next step, as described by Rob Jackson, a professor of environment sciences at Duke University, is "to inject millions of gallons of water and chemicals at very high pressures, pressures like you see in the deepest part of the ocean. And that pressure is what cracks open the rock and frees the gas and the oil."

Natural gas is trapped in billions of tiny pores. We fracture the rock to release it. Hence, the word fracking.

Now, we've been fracturing rocks for oil for more than 60 years. But in the last decade, we've totally transformed the process by adding that horizontal business . . . all the chemicals . . . and the colossal pressure of the water.

Fracking is two weeks of noisy trucks and dust; after that, the finished well quietly pumps out gas for 30 to 50 years.

Fracking can turn struggling farmers into millionaires. Bob and Tina MacCheyne signed away the rights to the shale under their farm, but the money isn't flowing yet. They live in New York State, which so far hasn't permitted fracking.

Now they're having second thoughts because they're afraid fracking might affect their water supply.

"We support probably 40-some beef cows here," Bob MacCheyne told Pogue. "Money isn't everything. I mean, if we don't have quality water here, we don't have anything."

As it turns out, fracking is just a tiny bit controversial.

As you'd guess, the gas industry says that the dangers are overblown.

Said Stark, "Bottom line, 99 percent of it is water and sand. We use a biocide, a hand sanitizer, to make certain that we don't send living microorganisms down into the shale. We can't afford to have corrosion taking place, so we add an anti-corroded agent. The last thing we're talking about adding is what we refer to as a surfactant. Funny name, but it's really hand soap."

Actually, according to the EPA, the chemicals are slightly scarier than hand soap - chemicals like benzene, toluene, xylene, diesel, hydrochloric acid, glycols.

Rob Jackson studied the water at hundreds of homes near Marcellus fracking wells.

"We asked a simple question: 'Is your water any different if you're living near a natural gas well?'" Jackson said. "And it was a glass half-empty, glass half-full kind of story. We did not find evidence for the chemicals in fracturing fluids, for instance. What we did find was much higher likelihood that you would have gas in your water - methane, ethane or propane, the things that are in the natural gas itself. We think the simplest explanation for that is poor well integrity."

In other words, those mile-long pipes can leak.

"Depending on where you are, five, ten, 20 percent of oil wells have problems with their well integrity through time," said Jackson.

"We're not saying it's a problem every time. But there are a number of cases where there have been problems," said Cornell professor Bob Oswald.

And it's not just people drinking that water. Veterinarian Michelle Bamberger and her husband, Oswald, studied 24 cases where animals had problems.

"Changes in breeding - abortions, still births were more common after drilling than before drilling," said Bamberger.

George Stark's company has racked up a number of violations, for allowing natural gas to pollute the local water.

Pogue asked Stark about the 2010 letter from the Pennsylvania Department of Environmental Protection: "What was that about?"

"That was at a time in 2010 that there was a question of what we would refer to as methane migration," Stark replied. "What we discovered is 70 percent of the water wells in Susquehanna County have preexisting methane in them already."

Today, Pennsylvania gas companies are required to test homeowners' water before and after fracking.

"Prior to that 2010 letter you mentioned, their water well was not tested for methane," Stark said.

"Live and learn," he laughed. "Now we test it everywhere."

Then there's the disposal problem. What do we do with all the poisonous water that comes back up from the fracked well?

"There are still some states where you can spray that water on lands, or where it's used for dust control," said Jackson. "It's a terrible idea. Most of it around the country goes to what are called deep injection wells,' where you take waste water and pump it back underground very deep."

That's half a trillion gallons a year.

Maybe the best solution is the newest one: recycling that nasty water to use in the next well.

"What we're able to do is clarify that water and reuse it again for the next operation," said Stark, who believes a majority of the industry reuses the water.

I was really hoping that I'd be able to tell you, once and for all, who's right: the gas companies or the worried environmentalists.

But I'm sorry; I can't. There's so much we don't know. We don't know exactly what chemicals are being pumped into the ground.

"The problem is there are a number of proprietary compounds that are used; they're not revealed," said Oswald.

We don't know how often problems occur - a number of cases have been closed by non-disclosure agreements. "The landowner, the farmer is compensated, and in exchange for that compensation, their silence is purchased," said Oswald.

So: Is fracking worth the risk? Trouble is, we don't know what the risk is. The EPA is conducting the first national, comprehensive study, but it won't be finished until 2014.

Here's one thing we do know: fracking has been incredibly successful. There are 36,000 fracking wells in this country; thousands more open up every year. The price of batural gas has dropped by 33 percent since 2006 - we're actually about to start exporting it.

Over time, it's a good bet that regulations and public pressure will make fracking get cleaner and safer.

And that's lucky, because here's one more thing we know: fracking isn't going away.